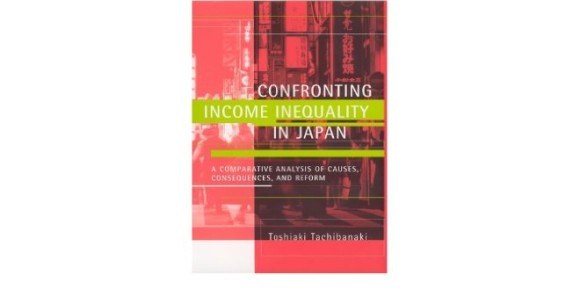 Confronting Income Inequality in Japan: A Comparative Analysis of Causes, Consequences and Reform by Toshiaki Tachibanaki is already a little dated (2005) but remains the go-to monologue available in English dealing with the topic. Income inequality has become a much more visible topic in the social sciences in the recent past. Publications such as Piketty’s Capital and Milanovic’s Global Inequality have been read by a wide audiences, also here in Japan. The latter’s popular chart has become widely known as the “Elephant Curve”.

I already wrote a post with some pointers on inequality in Japan here and don’t need to repeat any of it here. Going right into Tachibanaki’s work, his first chapter is a historical contextualization of Japan’s inequality. We learn that up until the 1980s wealth and income inequalities were relatively low by international standards. The second half of the 1980s sees the onset of rapid change, owing to Japan’s bubble economy. The explosion in real estate prices led to widening wealth gaps. Income inequalities exhibit a similar trend, although in terms of redistributed income (i.e. after taxation and social transfers), there are somewhat smaller.

According to Tachibanaki, the notion of Japan being a “country of equality” is at least partly due to OECD studies in the 1970s that show the country being on par with Norway and Sweden. These studies have been criticized by a number of national scholars but have stuck in the popular imagination. Today, the OECD shows Japan in the middle of their Gini tables. If it is hard to compare Japan internationally across time, we can at least agree on the trend towards worsening inequality.

What is Japan’s benchmark though? Do we compare it to Scandinavian welfare states (and Japan faring badly) or Anglo-Saxon non-welfare states (and Japan faring well)? Tachibanaki thinks of Japan (and then again, this is a study from the 2000s) as a low-welfare provision / weak income redistribution economy. However, despite Japan’s status as a “non-welfare state”, its relative welfare provision is relatively high due to private sector involvement (e.g. corporate pensions, housing assistance, etc.) and strong family (i.e. female) centered care provision (e.g. old age care). Low unemployment rates also mean that the fiscal outlay for people out of work is relatively low. And yet, as growth continues to be low and government debt ballooning, social spending as a percentage of GDP has increased to levels on par with most OECD countries. I would thus think that Japan occupies(d) a fairly unique position in the international classification of (non-)welfare states.

Tachibanaki’s second chapter turns to the history of income inequality in Japan, which to me is the most informative section. As said before, Japan was a highly unequal country before the Second World War. A hierarchy based on labor and on gender caused large wage discrepancies between workers in a factory. Wealthy and extremely wealthy households stood at the top of the income distribution, much of their wealth was hereditary. Prewar data is to be taken with a grain of salt because of the unavailability of household data. We rely on tax records for relatively wealthy taxpayers. Low and middle income earners as well as extremely rich ones are omitted. 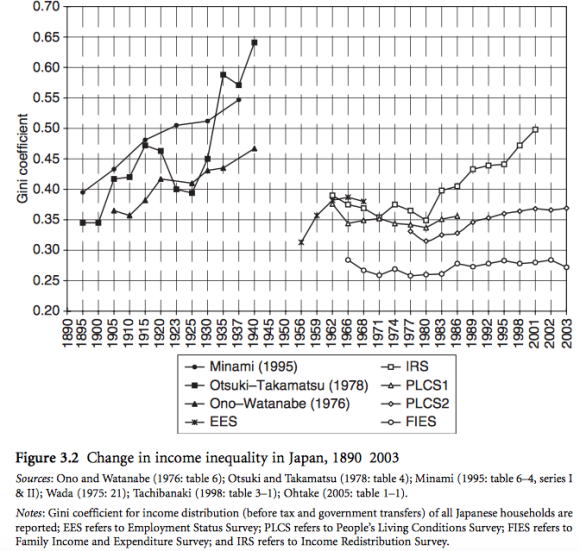 A collection of estimates is displayed above, which is a chart taken from Moriguchi and Saez’s paper (2010). We can see the clear break between pre and postwar distributions. The compression in postwar inequality was one the one hand mainly due to the physical destruction of capital (and the devaluation of financial capital) and due to the economic and social reforms instigated by the Allied Forces. These included the prohibition of zaibatsu, land reform, democratization of labour, tax reform and equal opportunity in education. Land reform reduced the share of asset income due to landholding from 21.0% in 1940 to 3.4% in 1950.

Next Tachibanaki discussed the effects of postwar reforms and the subsequent economic growth on income distribution (p. 58). While there were small rises in the Gini coefficient in the 1950s and 1960s, they were not enough to change the general picture of inequality prewar to equality postwar. The main driver of equal distribution was manufacturing wages, themselves driven by productivity increases. These were shared across the board, i.e. not only in large companies. The “dual economy” emerged somewhat later, according to the author. Another important factor was collective bargaining / industrial relations as well as the seniority system.

On page 61, Tachibanaki asks why egalitarianism was adopted as the approach to wage payments and identifies the nature of production systems. Standardized goods were produced in large quantities in order to lower the unit cost of production. Equal wage payments were the best choice for such assembly line jobs. The same wage principles were also applied to white-collar jobs. This egalitarianism improved team spirit, in turn increasing the productivity of all workers. Finally, the immediate postwar period saw most people still hover around the poverty line. A fairly uniform wage distribution was chosen by industrial managers so as to bring the maximum number of workers over the poverty line.

Page 71 has a most interesting graph that looks exactly like Milanovic’s Kuznets Wave. The traditional Kuznets Curve suggests that rising income inequality is eventually self-adusting. Once an economy reaches a certain point of development (the “Kuznets turning point”), inequality decreases as the returns to human capital become more important and widely shared among the population. Tachinabaki, however, suggests that the Japanese 100-year story is not one of an inverted-U curve (as Kuznets had foreseen it) but of a wave, e.g. once-again rising inequalities towards the present.

Chapter three looks at the causes of rising inequality. The four main sources of income inequality in the early 1980s were (in ascending order of importance) wage income, social security contributions, taxes and assets income. These are analyzed in turn and provide one of the analytical cores of the book. Of particular interest to me are the declining share of self-employed people as well as the wage differentials between large and small firms (pp. 99-109). The chapter continues to address tax and redistributions via the social security system, to which I may turn on a separate occasion. 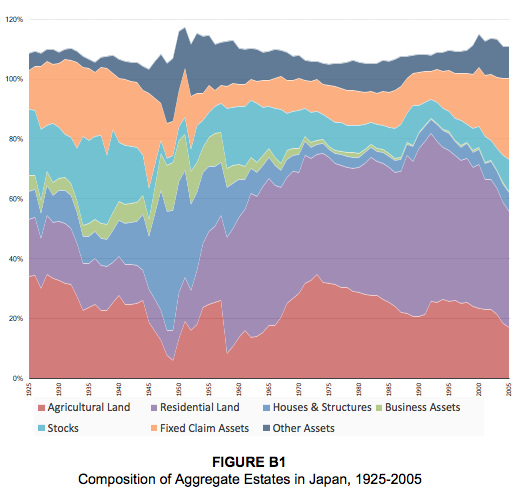 Chapter four looks at the distribution of wealth. I put above a graph from Moriguchi and Saez’s dataset (available on the WTID website) to add some numbers to this. The graph shows the composition of wealth in Japan in the very long run. What becomes obvious here is that agricultural and residential land is by far the most important storage of wealth in this country. Houses and structures are negligible, as opposed to a country like Germany, where dwellings are a good third of the total households’ balance sheet. Major breaking points are the Second World War (the devaluation of financial assets, leaving the residual and un-destroyed building stock have a larger share of a much reduced total) and the late-1980s bursting of the bubble (the sudden devaluation of financial assets followed by the more gradual but more lasting erosion of land prices).

High homeownership rates have let a significant part of the population share in the benefits of land price appreciation over the decades. Tachibanaki provides several reasons for such high homeowner ratios that are interesting and to be seen in conjunction with a more sociological explanation as provided in this book I discussed yesterday. Farmers, self-employed people, traders and family-run workshops traditionally owned their homes as they also ran their business out of them. Their large share in the population meant high homeownership rates. (However, how do we then explain such low homeownership rates before the war, when the occupational mix should have been very similar?)

Second, land was traditionally cherished as the most reliable asset to hold. This was third bolstered by strong land price increases from the 1960s through to the 1990s. Fourth, inheritance and gift tax law favors land over financial assets. Fifth, no income tax is levied on imputed rent, something I first had to get my head around, but which revealed an interesting dimension to tax law, and yet another instrument with which homeownership is encouraged. Interestingly, the Netherlands taxes imputed rents (while it also allows for mortgage interest rate deductions). Finally, the “Japanese Dream” of a small house in the suburbs with a garden was another reason, according to the author.

Chapter five deals with equality of opportunity and equality of outcome, while the final chapter discussed policy implications. I may go into these chapters in more detail at some point.