The role of housing in shaping urban space is extremely important. For that matter, I re-read an important book on the subject and jotted down some notes for myself after the jump. 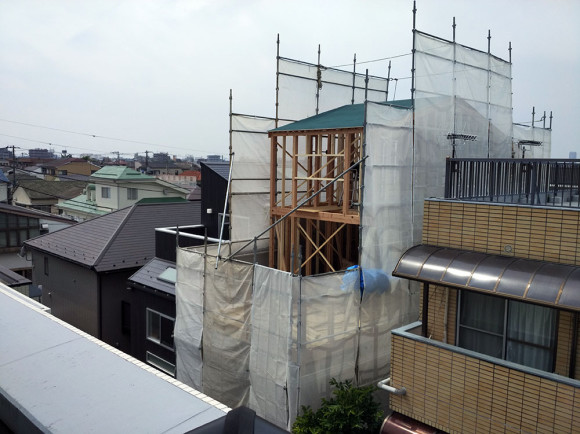 Ten years since its publication, Housing and Social Transition in Japan (edited by Yosuke Hirayama and Richard Ronald) remains a highly relevant volume to better understand the immediate postwar situation. While the population was primarily renting in the prewar period, Japan rapidly became a mass homeowner society after the war. I have put up a chart that compares Tokyo with the national average in this post. The government provided key support with a set of institutions. The overarching aims were to grow the middle class via homeownership and to spur economic development via the construction industry. Meanwhile, the private rental market received no subsidies unlike in other countries, and public housing rental remained residual although it occupied perhaps an outsize share of people’s imagination.

Hirayama’s opening chapter details the relationship between the state, housing policy and social transformation. The government’s three-pillar approach (Government Housing Loan Corporation – 1950; Public Housing Act – 1951 and Japan Housing Corporation – 1955) was in fact tilted towards subsidized loans for home acquisition. With land prices rising much faster than incomes and economic growth more generally, owning a home (and its land) provided the owners with significant capital gains. One has to be cautious not to draw too fast connections between homeownership and asset accumulation given the prevailing culture of scrap-and-build, i.e. the average lifetime of a building being a mere 26 years. The accumulation benefits of owning a house were entirely related to the land underneath it. This has important implications for the quality of the housing stock, as Richard Koo of Nomura has written about.

The policy to encourage homeownership and a “middle class society” has also led to greater social stratification into “inside” and “outside” this system. The celebration of mai homu (“my home”) as the ultimate aspiration of an urban dweller has created this very peculiar “social flow”, which Anne Waswo writes about in her book, too. Given the incentives inherent in this system, the rental housing stock deteriorated proportionately. In 1965, the average tatami space allotment per person was about 5 in owned accommodation, and 3 in rented. It would be interesting to see how this gap looks in comparison to other countries with similar homeownership ratios at this time. The fact that members of Japanese society overwhelmingly self-classified themselves as “middle class” had perhaps not so much to do with facts, but that the aspiration to one day being an owner was realistic.

Eiji Oizumi’s chapter looks more deeply into housing finance. Although structural housing shortages were overcome by the 1970s, construction activity remained high, leading to more scrap-and-build. Unsurprisingly, the ratio (demolished units divided by newly built units) peaked in the bubble years of the 1980s. However, even before and after that, it is unusually high (see above for the short average life span of a building, and read this transcript of an interesting podcast for some background). We also learn about some key facts of the house-building industry. A large number of small house-builders operate in local markets, while today, the national market is dominated by eight major building companies, which often subcontract the smaller builders.

Going back to the postwar period, I show in my data that the density of small homebuilders in Tokyo consistently increased throughout my period of observation. In the early 1950s, there were 500 inhabitants per small construction establishment. In 1972, this figure had reduced to 300 inhabitants. Before the market became dominated by large prefab and condominium building companies, these small players were the main agents in the extension and upgrading of Tokyo’s building stock. Their growth was disproportionately high. This shows the central position housing and homebuilding occupies in the Japanese economy, but also shows how labour intensive this “living space maintenance” was and is.

Chapter four talks about housing as welfare and how it falls short fulfilling this function. It is worth returning here for explanations why rental property is of such poor quality. Chapter five considers the demographic transition Japan is undergoing, and whether some kind of financial engineering / reverse mortgaging to increase financial security for people in their old age is a realistic policy alternative. A chapter on gender follows. Written by Mieko Hinokidani, it charts the modernization of housing amidst a patriarchal social model with comparatively low female labour force participation rates. The emergence of the “n-LDK” model, i.e. the subdivision of homes into rooms of a different function as well as the emergence of separate sleeping arrangements, had a significant gender dimension. Ann Waswo’s book is also a good source on this. We should also not forget that single women form a large part of the the rental population in small apaatos and manshons. The penultimate chapter deals with homelessness in Japan.

Richard Ronald’s concluding chapter provides more anthropological and sociological context of the home in Japan, elaborating on the concept of ie, among others, and is well worth the read. Ronald writes that “modernization and social transformation in Japan thus has had to maintain central meaningful elements of the Japanese house whilst in reality the built environment has changed substantially” (p. 171). An interesting quote is taken from Nagamine (1986), who is cited as saying that “one of the major factors in accounting for the prosperity of the Japanese economy is that the people have opted to tolerate, rightly or wrongly, a meager resource allocation for their living conditions, thereby leaving the maximum amount of resources for industrial development” (p. 176).

Using a factor endowment approach, we find that Japan is relatively land and capital scarce. The isolation of the country for much of its pre-modern period also cut it off from regional and especially international trade flows. This has traditionally led to intensified land use and an optimization of labor as the critical production factor (see labor-intensive industrialization). The postwar echo of the Tokugawa Period, so to say, may not be land scarcity (in a now urban setting), but how this land scarcity was being dealt with, i.e. via an intensification of land use. I call this the productivity of urban space / the productivity of living space. Obviously housing is an extremely important element of this, as is social infrastructure. Both were comparatively poor by international standards. In my research, however, I also find that rapid economic growth in Tokyo did not have the same dislocational effects that can be observed in other megacities growing this fast, but that the city’s expansion was rather egalitarian. More on these two points in a separate post. I end today’s post on a quote I feel has something to do with this:

When you live in Tokyo your home is the entire city – you go to work in the office, eat in restaurants and sleep at home. You don’t even need a refrigerator because they are convenience stores and vending machines on every street corner… Kyoichi Tsuzuku as told to Hou Hanro (The Japanese Home after 1945, The Barbican exhibition catalogue)