Seldom does a book create such buzz as Thomas Piketty’s “Capital in the 21st Century” and rarely has a book faster been lauded as one of the decade’s defining books on economics. Much of the silence on this blog can be explained by engaging with Piketty’s magnum opus. I wanted to wait before posting anything before I would see the French economist speak at Columbia yesterday. What follows are some notes on the book and on issues beyond. 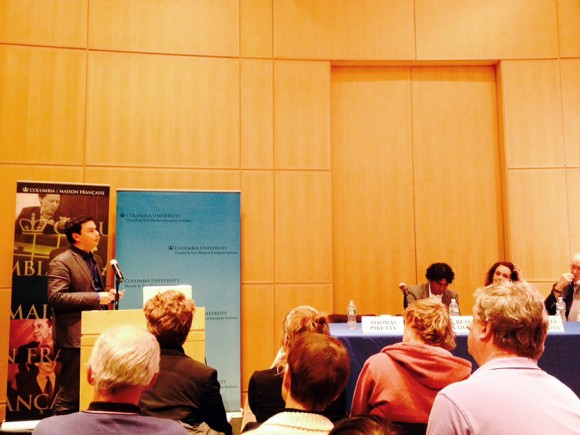 The book is timed extremely well. The issue of inequality has come to the fore forcefully over the last couple of years, perhaps globally with the Occupy movement and here in the US through films such as Robert Reich’s “Inequality for All” and Alex Gibney’s “Park Avenue”. Much of this discourse owes its empirical data to Piketty, Saez and a veritable cohort of economists who have been working away on their WTID – World Top Income Database – for several years now.

Reading the book and seeing Piketty speak at Columbia, I can only agree – this is a seminal work and I felt enthralled and empowered reading it. It equips a new generation of economists and non-economists alike with a rational and eloquent theory of capitalism. The buzz is certainly earned.

In a nutshell, Piketty’s book says that historically, the return on capital exceeds economic growth and there is no reason to believe that it won’t do so in the 21st century.

The period from 1913-1975, the period from which most economists have historically drawn their income data, was a period of decreasing inequality. In much of the world, capital stocks got destroyed in the chaos of two world wars. Postwar reconstruction growth and redistributive policies allowed a veritable middle class to own a decent share of income and wealth.

Alas, this “short twentieth century” proved to be no more than an anomaly, or an aberration of sorts, to this long-term trend of high capital-output ratios. Growth slowed, marginal tax rates on income and capital were reduced widely from the 1970s onwards. Income from capital became more important again vis-à-vis labour income.

This concentration effect has been made worse by the concurrent rise of the super-manager. Increasingly detached from principles of merit-based pay, they have become a new breed of the super-rich with a disproportionate share of the nations’ income and wealth at their disposal.

Piketty is no writer of neo-Marxist agitprop, and neither does he “want to aggrandize the non-real sector with fat taxation”. It is somewhat amusing reading these comments in the financial yellow press. None of them take Piketty head-on for the data that he and his colleagues mined over the last couple of years. Perhaps this tweet of the Economist’s Ryan Avent sums the debate up quite well:

So far, Piketty critics doing a good job knocking bark off a few trees at the edge of the forest. They should look up! It’s a big forest.

Perhaps more constructively, Piketty is criticised for being apolitical – Robert Reich has made this point in the Guardian recently. Essentially, the political system currently in operation in the US has become so captured by the super-rich that it will be difficult to put a check on that influence without a radical break. By omitting that narrative, Piketty misses the elephant in the room.

On the substantive side, people have tried to take issue with Piketty’s assertion that capital returns are likely going to outstrip economic growth, on both counts: James Pethokoukis of the American Enterprise Institute calls Piketty a techno-pessimist for underestimating future GDP growth. Branko Milanovic says that with catch-up continuing in India and China, global growth may remain elevated for longer than Piketty thinks.

As far as capital returns are concerned, no one can know for sure if they are to remain structurally higher than economic growth – and history may not be the best guide. However, Piketty’s explanation for why it is more likely than not the case seems to me much more convincing than anything I’ve read out there. Moreover, Suresh Naidu argued convincingly on the panel that capital returns are as much a social as an economic construct.

Can this book change the discourse of capitalism in the years to come? In the past, capitalism has proved extremely agile to internalise its critics. After all, Keynes was a committed capitalist. More recently, the super-rich have put an increasing emphasis on charity and philanthropy as a way of giving back to the societies they inhabit (cynics may call it repentance, or “conscience laundering”).

With the ongoing mainstreaming of impact investing and concepts such as “patient capital”, “triple bottom lines” etc., we may just be witnessing a new transformation of capitalism, one that takes into account what we perceive as unfair distribution of wealth, and more importantly, opportunities. Is that what we want though?

Although an overwhelming majority of the people in the growing “third sector” would be quite sympathetic to Piketty’s arguments, social finance practitioners will want to avoid being pulled into this debate. Their programs make good micro sense. The overwhelming (financial) presence of philanthropies and IFIs in the sector also have the undeniable effect to depoliticise impact investing. However, programs are not good alternatives to macro policy changes.

While a capitalism with a more human face is worth striving for, social finance is unlikely to meaningfully affect the power structures of the modern political economy, i.e. a particular breed of crony capitalism that makes representative democracy an increasing charade in the US and beyond.

What is more, I feel the debate on inequality has to be steered in the direction of redistribution, instead of trickle-down growth: After all, in the US, the richest 1% have appropriated 60% of the economic growth from 1977 to 2007, leaving hardly any real wage gains for the middle and lower strata of society.

In this vein, my friend Gareth Dale looks at the history of the concept of economic growth and its elevation to central tenet of our capitalist system (and later socialism and communism) with the advent of industrialisation. We never question it, but could lower growth be just fine? Or will it even be imperative, given increasing environmental stresses and the failure to “dematerialise” it?

Still, a world of decreased economic and population growth means ideal conditions for an ever greater accumulation of capital in the hands of the very few, as powerfully demonstrated in Piketty’s simple equations.

In this world, reminiscent of the extremely unequal pre-WWI European societies, inheritance and income from capital returns will play an increasingly larger role, despite many super-rich philanthropists’ stated desire to give away their riches during their lifetime (“spend-down philanthropy”). One has to keep in mind that the top 1% is not just the frequently bashed super-rich but almost 2.5 million working-age Americans.

Piketty’s policy recommendations, i.e. a wealth tax and very high marginal income tax rates, are “unrealistic” to be sure (or are they? I will look at his fourth and final chapter in a separate post to keep this one here more digestible). Such taxes need to be globally coordinated to make sense, and tax havens need to be a thing of the past once and for all. And we can be sure that a powerful spin will be orchestrated to present such measures as potent growth and job killers.

While it is simple for the political “left” to jump at Piketty’s prescriptions, it is even easier for people on the right to demonise him.

A very important contribution to the debate came from Martin Wolf in the FT. After expressing his pleasure at the book, Wolf proceeds to sum it up in his signature no-nonsense prose. He concludes with his major but constructive criticism of Piketty: why does the author omit any discussion as to why inequality matters and simply assumes that it does?

With the benefit possibly age-related wisdom, Wolf offers his opinion. I end this post on that quote:

For me the most convincing argument against the ongoing rise in economic inequality is that it is incompatible with true equality as citizens. If, as the ancient Athenians believed, participation in public life is a fundamental aspect of human self-realisation, huge inequalities cannot but destroy it. In a society dominated by wealth, money will buy power.

Inequality cannot be eliminated. It is inevitable and to a degree even desirable. But, as the Greeks argued, there needs to be moderation in all things. We are not seeing moderate rises in inequality. We should take notice.

One thought on “21st-century capital”