The management of the Hotel Okura announced in late May that the iconic building in Tokyo’s Toranomon area will be demolished and redeveloped into a new hotel complex opening in time for the 2020 Olympics. 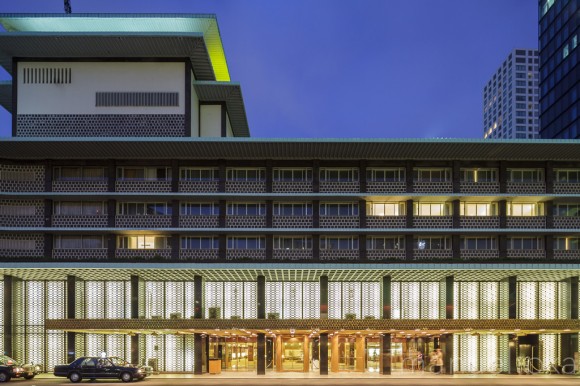 In his FT’s Fast Lane column in this weekend’s Magazine, Tyler Brûlé describes his perfect hotel, which sounded remarkably familiar to me. From the colour palette to the rooms’ simple decor, the fabled carpet and the ample lobby area, he must be talking about the Hotel Okura!

When he closes with the announcement that this hotel is slated for demolishment, a quick Google search corroborated my suspicion.

The hotel will close in August 2015 and demolition will begin shortly after. In the original Okura’s place, the developers will erect a new 200m-tall tower alongside a lower 13-storey building. The new hotel and commercial space are scheduled to open in 2019, just ahead of the Tokyo Olympics.

It seems that the owners couldn’t resist increasing the yield on the precious real estate they own in this sought-after Tokyo neighbourhood that is seeing a renaissance thanks to other developments in the area. These include the Mori projects Sengokuyama and Toranomon Hills.

Losing the Hotel Okura would be a massive blow to Tokyo’s architectural and cultural heritage. The landmark building is a beautiful synthesis of internationalist and traditional Japanese architecture.

Five architects were in charge of the design. The group was led by Yoshiro Taniguchi, father of Yoshio, who would go on to become a celebrated architect in his own right. The Okura’s six basement and six upper level floors spread out in three wings, east, west and north, which resemble a t-shape when looked at from above. The hotel opened in 1962, and rooms went for as little as $8 per night ($60 in today’s money).

The Okura played a pivotal role in two major events in postwar Japan. Weeks before the 1964 Olympics, it hosted hundreds of delegates for the IMF/World Bank meetings. Here, many debates centred around the question whether Japan can still be considered a developing country. When the Olympics kicked off, the Okura was one of the most important hotel venues catering mainly to foreign guests.

The hotel’s extension in the 70s was a testament to the Okura’s success. An underground passageway connects the original building with the new South Wing.

Tokyo has a history when it comes to demolishing iconic hotel buildings in order to make space for architecturally inferior, yield-maximising ventures. The Frank Lloyd Wright designed Imperial Hotel, which famously withstood the 1923 Great Kanto Earthquake and counted towards one of the most important architectural achievements of the first half of the twentieth century, had to make space for the hotel’s new incarnation in 1970.

Ironically, it was Baron Kishichiro Okura who ran the Imperial Hotel in the 1920s and most probably picked up his passion for hosting guests here. This passion was to translate in his own hotel, a lifelong dream come true just months before is death in early 1963.

Luminaries such as the late Steve Jobs of Apple would regard the Okura as their preferred place to stay when in the Japanese capital.

Can a campaign to save the hotel stir some emotion? Will Tokyoites rally behind one of their city’s iconic buildings or is the nostalgia surrounding the Okura largely a foreign emotion?

Conservation in Japan is a huge topic that will doubtlessly inform the debate about the Okura. The nearby Nakagin Capsule Tower was apparently saved from the wrecking ball. Also here, questions about profit and land prices in the fancy Ginza area influenced the debate. At the end, however, deteriorating conditions inside the Metabolist structure were cited most frequently as the reason to demolish the Kurokawa-designed building.

The Okura, however, is in much better condition, the reinforced concrete and steel frame structure solid, and the interior painstakingly maintained in its original 1960s condition.

Has the time really come for us to say goodbye to this architectural masterpiece?

One thought on “Hotel Okura to be demolished”