We have put up more teasers from our forthcoming Yangon Architectural Guide on our Tumblr and our Facebook pages. Herewith some of the highlights. 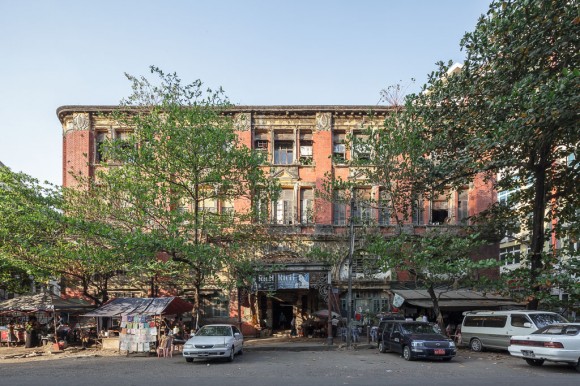 Balthazar’s Building on Bank Street and the corners of 33rd and 34th Streets is an imposing Edwardian brick building from 1905. It served as the headquarters for Balthazar & Son, a firm founded by an Armenian merchant who originally came to Rangoon from Calcutta in 1866. The building also housed offices of other companies, such as German engineering firm Siemens. Today the building is derelict and partially squatted. Lawyers’ offices and apartments surround a large but dim and overgrown courtyard. There are some tea and copy shops on the ground floor and up the dark stair case surrounding an abandoned elevator shaft. 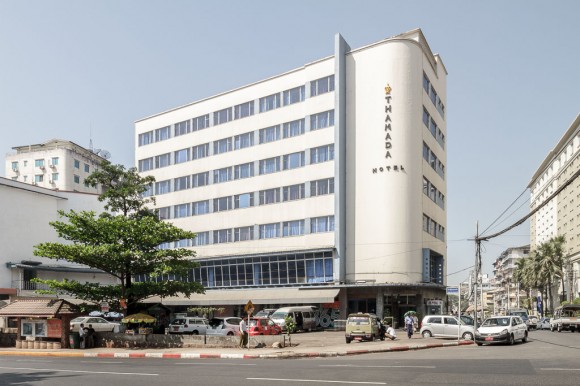 The Thamada Hotel and Cinema complex is one of the best examples of international post-war modern architecture in Yangon. Built in the late 1950s, it underwent a complete makeover in the 1990s and today offers relatively decent and affordable 3-star comfort in its central location on Alan Pya Pagoda Road. Along with the Strand and Inya Lake hotels, this property used to be the preferred tourist choice for many years during Burma’s period of international isolation. 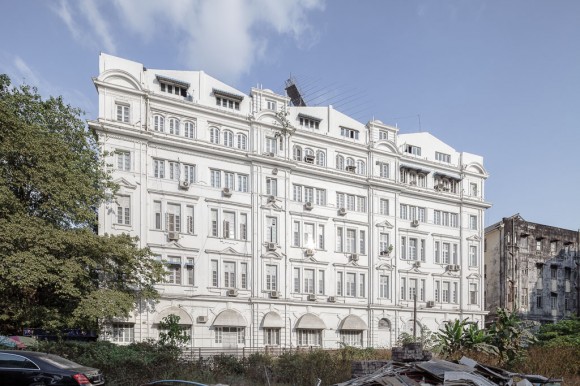 The Oriental Life Assurance Building was built in 1914 as the Rangoon head office of the Calcutta-based life insurance company, which mainly served European clients. The Indian Embassy moved here after the dissolution of the Raj (we want to find out exactly when that happened), and had to deal with the repatriation, voluntary and involuntary, of hundreds of thousands of Indians from Burma over the next years. Indian-Burmese bilateral relations have warmed quite considerably since the mid-1990s. They had reached rock-bottom when India supported the pro-democracy activists in the wake of the 1988 student protests. Recently, the much-touted “Asian Crossroads” linking China with India via Burma have created renewed interest in economic cooperation, with a port and special economic zone in Sittwe designed to better connect India’s backward northwestern states to the Indian Ocean. 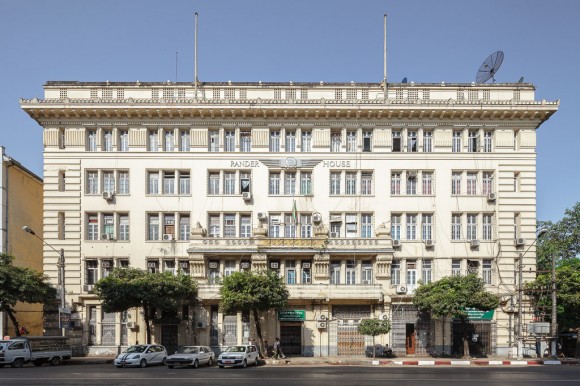 Rander House (1932) on Pansodan Street corner Merchant Road is an imposing five-storey building commissioned by traders who had migrated to Burma from Rander, a town close to Surat in Gujarat. Its rigid window grid, geometric forms and subtle art deco features set it apart from earlier colonial-era buildings. After independence, Pakistan’s embassy was housed here, while India’s embassy, by then still located in Randeria House, was just across the street. Later the Internal Revenue Department took over the lower floors, while the top floors were turned into apartments. 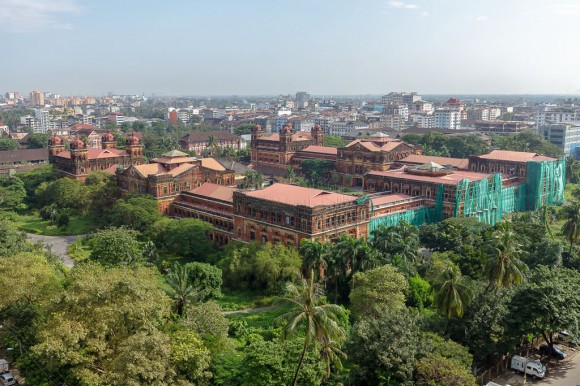 There is hardly any other building that captures the imagination in a way as the Secretariat, or the Ministers’ Building, does. It was built in several stages between 1889 and 1905 to be the administrative seat of British Burma, a province of British India until 1937 and a dominion of Britain from then until independence in 1948. As much as the Secretariat is a symbol of British colonialism, it is also extremely important for modern Burma/Myanmar. It was here where General Aung San, along with several other Burmese politicians, was assassinated in 1947. The building complex was left to decay substantially over the last decades. Today plans exist to turn it into a cultural centre as well as a museum.