Phew. I have successfully “disengaged” from reading the news and logging on to Facebook for what feels like an eternity. Am I denying reality? No, but I want to turn down the volume for the time being, and news has a way of reaching you despite not checking three times a day. All this leaves more space for books, including Branko Milanovic’s “Global Inequality”. 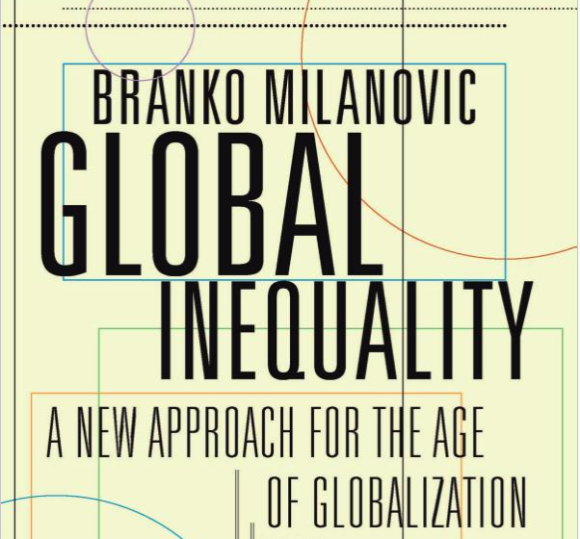 Martin Wolf has called it an outstanding book that adds to the growing body of work on the topic by scholars such as Piketty, Saez or Bourguignon. As someone with a passing interest in these issues, I can only agree. It’s beautifully written and relatively accessible. Just as Piketty weaves in economic history eloquently, so does Milanovic rely on an increasingly rich body of historical inequality data.

What he writes about migration is particularly salient in today’s world of to-be-built walls and tightening borders. Quoting Pritchett (“there are two possible ways to reduce global poverty: migration and increasing peoples’ wages while in their home country. Why should only one of them count as ‘development’?”), Milanovic goes on to sketch out three options developed nations face with regards to further migration from poor countries.

They can either shut themselves off, reduce migrants’ civic rights or continue the way they currently handle the issue. The first and the third option are really not palatable: the first one does not make sense economically (most developed nations need migration) while the third one’s political fallout is too drastic, as we can see from Brexit and Trump.

Therefore, the second option needs to be pondered more seriously. As Milanovic himself says, this is merely stating the obvious: be it undocumented migrants in the US, or “expatriates”, there are plenty of people who already accept less civic rights in exchange for economic benefits. One way of dealing with the political explosiveness of migration going forward may therefore be to become less “binary” with citizenship.

I think I agree with Milanovic’s reasoning up to a point, at least theoretically. While a world without borders and nation states may work very well in my imagination, public opinion suggests that not everyone agrees.

However, the fact that migrants often accept discriminatory treatment is in itself not evidence of the feasibility of this approach, but only proves their (relative) poverty.

We need to tread extremely carefully here. Because when you open this can of worms and think it through practically, you easily arrive at extreme versions including this one from incoming World Bank Chief Economist Paul Romer. Romer essentially suggests setting up free zones for refugees in Sweden.

(On a side note: I wonder why the story has not created more controversy (just look at the enthusiastic discussion of this idea in alt-right media). Suffice it to say, these zones reminded me of the dystopian images created in Children of Men, which is set in the UK.)

Anyway, the book is definitely worth a read. Milanovic first sets out to explain inequality within countries before he devotes a chapter on inequality between them. As for the former, he posits that instead of a Kuznets Curve (i.e. the rise and eventual fall of inequality), there is a Kuznets Wave, i.e. the process of rising and falling inequalities repeats itself.

Globally, inequalities have been falling between nations, mainly thanks to the rise of China. As the country’s per capita income will soon exceed the global average, this effect may come to a halt. Further flattening of global inequalities may then depend on countries such as India.

One of the main points he makes is that when we look at the world as a whole, the middle of the income distribution (45th-60th percentile) has been doing very well recently — this is the rise of the emerging world’s (especially China’s) middle class. Their incomes have doubled since the late 1980s.

Meanwhile, the middle classes in the developed world have seen their incomes stagnate over the same period, while the top 10% income earners in the US (almost all of which are part of the global top 1%) have taken most of the income gains.

It is ironic to think that the ones who have seemingly “lost out” from globalisation are those in the 80th-95th percentile of the global income distribution. This reminded me of my Chilean friends travelling in the US, chancing upon relatively wealthy Trump supporters in the New Hampshire countryside. For most people in the world, they live in paradise.

Alas, inequality is always relative. The fact that the top 10 or 20%, i.e. those above them, have taken most of the income gains over the last decades has made so many people in the developed world angry at the ones below them. Those are the emerging middle classes of China and beyond (whose gains are “our” losses) or the migrants on the doorstep (who erode “our” social welfare system, or take away “our” jobs).

I digress. Read the book!

One thought on “Global Inequality”