Normal operations on this blog resume with a report of my recent trip to the UK. Only a month after our Christmas vacation, this time my visit was of an academic nature and took me back to old stomping grounds. 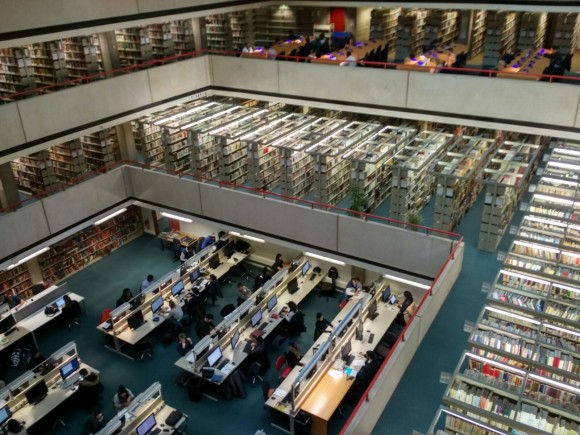 The occasion was a workshop and seminar on economic history at King’s College in Cambridge. Being in the UK for a whole week allowed me to spend some time in London libraries and visit a professor at Leeds University too.

It was a real journey down memory lane for me on day two, when I visited the SOAS library. I graduated from here more than ten years ago, and sure enough, many things have changed since then.

The library received an overhaul. A whole new university wing adjacent to Senate House was added. A swanky alumni office is tucked away on the first floor. The refectory serves perfectly edible food.

While I recognised the names of several professors, I missed those of many others. I noticed an openDemocracy alum who has joined their ranks, as has a fellow German who I had the pleasure to meet in Cambridge.

The SOAS bar smells a lot better now then back then. Is it still the cradle of radical student movements? Did it live up to such expectations when I was around? The place looks a little more serious now anyway thanks to refurbishments.

However, walking through the corridors upstairs, I was quickly enthralled in the lasting magic this place embodies. I listened to several language classes taking place on the fourth floor, with many doors wide open. I walked past the music rehearsal rooms, and read the name tags on the doors as well as their subject areas. I saw advertisements for the broad range of events taking place here.

And above all, I noticed the students – perhaps as diverse as at many other UK universities (I had spent the day before at LSE’s library) – but still very different. I could see myself and my SOAS friends in them. My wife and I recently reflected upon the fact that of our SOAS friends, almost everyone is in a mixed-race relationship.

A propos my wife: It has been almost 14 years that we met, in the SOAS library.

The next day saw me venture up north to Leeds, for a visit to a professor in the geography department who has done a lot of work on Japan. One of his articles is a real inspiration for my ongoing work on postwar Tokyo.

He was really gracious with his time, and took me on an extended tour through the campus. Its buildings reflect the changing fads of architecture, and tell us when resources were available for higher education.

Our trip to Cambridge allowed me to go down another memory lane. With my ten-year graduation anniversary coming up this June, I took a stroll around town and Downing College with a fellow PhD student from Japan.

Being a 9-month MPhil student here has obviously not been as formative as studying at SOAS for three years. And yet, I met two of my best friends at my college, and received some amazing academic instruction here.

Being back here as a student also made me better understand the privilege one enjoys in a place such as this. It attracts the brightest minds and offers one of the best learning environments there probably is. Teaching at Cambridge crowns an academic’s life and thus attracts the best, while the quality of the students puts everyone on their toes.

The seminar on Thursday – to which I contributed a presentation on my PhD research – was great. A student working on historical occupational data in China wowed me with his methodological rigour and sturdy laboriousness. He is literally going through thousands of homicide reports in order to extract the perpetrators’ and victims’ jobs.

A more extensive workshop on Friday offered the chance to see some cutting-edge economic history in action. Professor Paul Warde took the audience through his research that empirically proves Ken Pomeranz’s “ghost acreage”, i.e. Britain’s historical land shortage when compared to its production of goods.

As I zoom by rubber plantations en route to Penang in Malaysia, I also reflect on Corey Ross’s presentation on ecological history. My main takeaway from his talk was that with almost every cash crop, plantations offer higher per acre production yield, but lower commercial yield when competing head-on with smallholders.

It was a very busy week, without much time for private affairs. My colleague and I left on Saturday morning already and flew back to Tokyo. We arrived Sunday morning, which left time for me to go home, rest a little, and catch my flight to Kuala Lumpur that same evening.