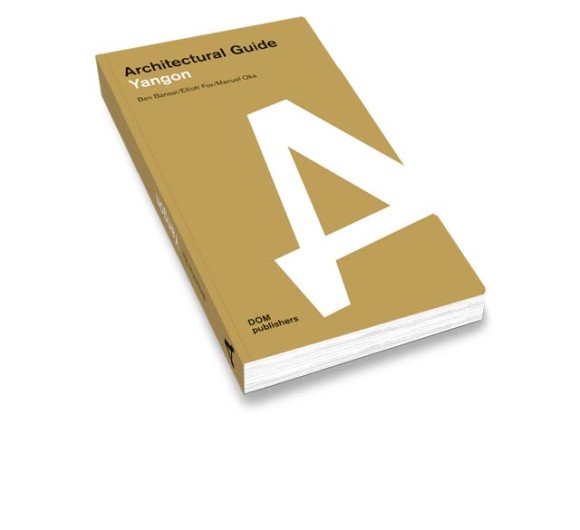 Our Yangon Architectural Guide, which I co-wrote with Elliott Fox and Manuel Oka, came out in late 2015 and took a little more than four years to sell out its print run. What next? Some ideas regarding a second edition after the jump.

Compared to other titles in the DOM series, Yangon is a rather marginal title (although there are more, say, esoteric places in the offering). To sell out our book, it was essential to be able to offer it in Yangon,

Tourists that do go to Myanmar are usually baffled by the built environment of the former capital and are more likely to buy a book on-site than from their homes. There is also a growing “local” audience of Myanmar and expat (architecture) professionals alike that were interested in buying it.

However, getting a book to Myanmar, and making it affordable, is hard. In this we were helped by the Goethe Institute, the German cultural institute as well as local distributors such as the Myanmar Book Center.

Some sporadic promotional activities helped: We launched the book in Berlin (where DOM publishers are based). We organized a similar event in Yangon; thanks to Manu’s efforts, we were able to put up all the contents of the book online (and present the website to a large audience on top of Sakura Tower). Last November, I presented an in-depth part of our research to another big group at the Goethe Institute.

What now? DOM have indicated that they are interested in publishing a second edition of the book. For us, a sequel was always on the cards. To some extent, our “project” would only be complete with a second book.

Our first one is full of references to the “transition” underway in Yangon, i.e. its heritage being under threat, urban space changing rapidly because of the booming economy, awoken from its slumber of decades of military rule.

Five years since we did the bulk of the research, many of the questions we asked back then must be qualified, while only few can be answered. The promise of a “new dawn” in Myanmar, and the initial gold rush that surrounded it, have undergone a reality check.

The construction boom in Yangon has gone through phases, but may have underperformed vs. our expectations, in terms of quantity and quality. The Rohingya Crisis has marginalized Myanmar on the international stage and morally dethroned erstwhile icon Aung San Suu Kyi.

Nonetheless, Yangon has changed tremendously, so our 110 buildings need to be updated for their current use and appearance (many have gotten a face lift). Some new structures worth including in our book have appeared, while others may have been torn down.

Above all, our thematic insets, on topics such as heritage, urban planning, transportation, Naypyidaw, the waterfront and post-1988, require a good re-work. The discourse has moved on since (and we do not claim to have an exhaustive list of what has happened since we undertook our in-depth survey several years ago).

We embark on this project at a time of great uncertainty again. As opposed to last time, however, pessimism prevails. COVID-19 has all but dried up tourism flows. Already dented by the Rohingya Crisis, it is uncertain when visitors will return in large numbers.

Worse still, the pandemic is choking emerging economies and threatens to derail the progress made during the cumbersome “reopening” from Myanmar’s isolation. As much as we grew tired of this ubiquitous reference to the Thein Sein administration, we may run into the same problem with COVID-19: We simply do not know the outcome, but it is all-encompassing.

Beyond the economy and its bearing on the architecture in the city, urban space as a construct in itself will undergo a reevaluation. Density, public hygiene, transportation, medical infrastructure, migration, among others, will become more important for the understanding of our cities when seen through the lens of COVID-19. Pending the wide availability of a vaccine, they are going to dominate the urban discourse for a long time to come.

All this will have to be reflected in our second edition, to build the arch, so to say, of five years of urban development in this exciting city. However, our book is not a current affairs essay, it is an architectural guide tasked also with taking stock of the city’s brick and mortar. The story of this unique city with influences from all over the world must be be told once again, with better information and incorporating some corrections.

Once travel is possible and responsible, we will also scour the streets once again, and Manu battle the heaving traffic when he shoots his updated photographs. A huge part of the first edition’s success were the amazing images that accompanied our text.

When in Yangon last year, I was impressed with how many people had a copy of our book. There have been a few books published on Yangon’s architecture, but it remains the only systematic guide to the city focusing on the built environment.

Writing a second edition would give our project a unique dynamism. I wonder how it will feel holding two books next to one another that together tell not only the story of this wonderful city’s architecture; but use the architecture to tell the city’s story.