I ventured on a short trip to Yangon last week to launch the website to our book, now online at www.yangongui.de. Manu lovingly and painstakingly put it together over the last couple of months. Go check it out, it’s beautiful (and worthy a separate forthcoming post). Herewith a quick write-up for my records. 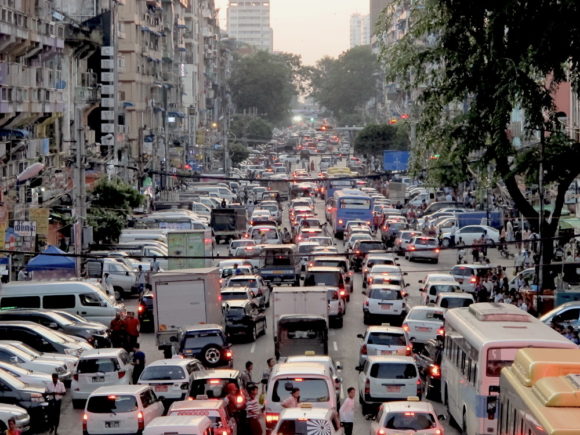 The event was held atop Sakura Tower, in the Sky Bistro, with one of Yangon’s best views of both downtown and further afield. It was organized by the Goethe-Institut, which was instrumental in the print version of the book, too and with whom we launched it almost two years ago.

Turnout was fabulous: While we expected around 40-50 people, the room was packed with more than 100. I was very happy to see Daw Moe Moe Lwin, President of the Yangon Heritage Trust; and Professor Frauke Kraas of the University of Cologne, two authorities on the built environment in this fascinating city. The British ambassador also popped by. Below is me getting ready for the talk ten minutes before the start. 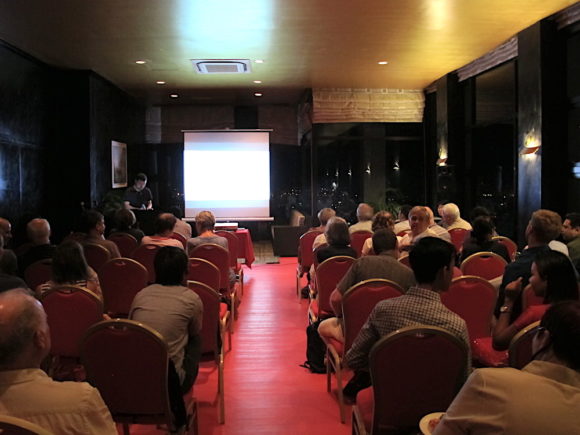 After introducing the book to those who didn’t know it yet, I explained the functions of the website. The part after that was devoted to an open discussion on “what’s happened since 2015?” – the cut-off date for our research.

A cursory look from the car window suggests that indeed a lot has happened and is happening – the list of noteworthy buildings to have gone up since is at around 30. They are mainly large commercial projects, i.e. hotels and offices, and reflect the breakneck development sweeping through the city since the “opening up”.

There are the obvious newcomers to the skyline such as Junction City, HAGL’s Myanmar Centre as well as the relatively pleasant Lotte development ashore Inya Lake. Sule Square, next to the former Traders Hotel, is not just an architectural mediocrity in the middle of one of the most historic downtown areas in the world, but also underdelivered on its promised public space amenities such as toilets, which are hidden near the carpark.

Not having been here since the launch, I had to deflect many of the audience’s questions back to members of the audience, which made for a nice and interactive format that I think people enjoyed. Especially Moe Moe Lwin was asked a fair bit. In general, as was the case during our previous event, the quality of the questions was great, and the general vibe very supportive of our book.

I have put some of the audience feedback into a separate post so as to record it in a safe place for future reference. This is especially important given that we are interested in tapping the wisdom of the crowds for a potential second edition. If anything, we’d like to keep the website reasonably up to date in one or two big update sessions.

In the rest of the time, I managed to see a few construction sites. The Villa Goethe’s renovation is in full swing, and most impressively, the heritage site will be complemented by a state of the art cultural complex with three new buildings, replete with a 250-people auditorium, library and café. The scale of the undertaking means that Yangon’s cultural map will receive an important point of reference that will up the game for culture in this city. 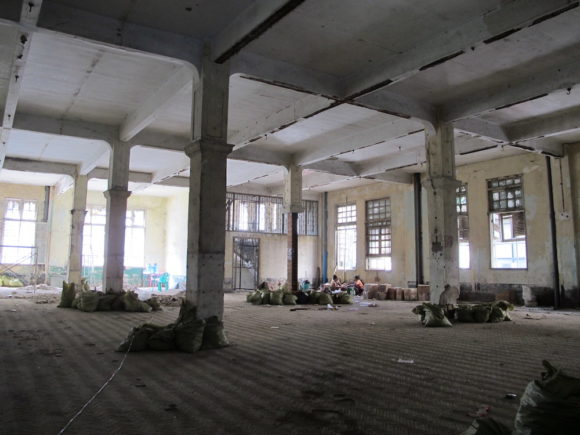 Another site was the new location of the National Library, which is inside the former Burmah Oil Company Building on Merchant Street. The renovation is overseen by our dear friend Ronnie (who has built in Yangon during the 1970s, for example). The scale here, too, is rather large: 10,000 sqm floor space in total, spread over four floors, and a rooftop cafeteria. I was surprised just how deep the site was, with corridors extending more than 60 meters south to north.

The third site was much smaller in scale: a friend of mine is renovating a residential building near the Shwedagon Pagoda to become a small hostel with 20 beds. This is obviously much more relatable, especially also because a lot of the work is directly overseen and the materials sourced from local workshops and DIY stores. Their vision is great, one can already hear the glasses tingling in the large café area downstairs. Excited travelers exploring the city from this great location, enjoying home-cooked food and muffins…

All in all, I found the downtown area buzzing with construction work, at least around some key sites. The new Kempinski Hotel is nearing completion. Scores of workers were busy early on a Saturday morning. The Secretariat is being properly renovated, finally. A press release came out a few days ago that details how a Singaporean office is now charged with the project (whose announcement, apparently, was not without controversy).

Another highlight was a theatre show, also organized by the Goethe-Institut Myanmar. Twelve Burmese puppet theatre students, under the direction of Anne Klatt, staged Pieces of Mind. There is a strong tradition of puppet theatre in the country, but this was different: a parachute and a red ball were just two of the inanimate objects that extended the puppeteers bodies and were used in an interpretative play full of association and exploration. 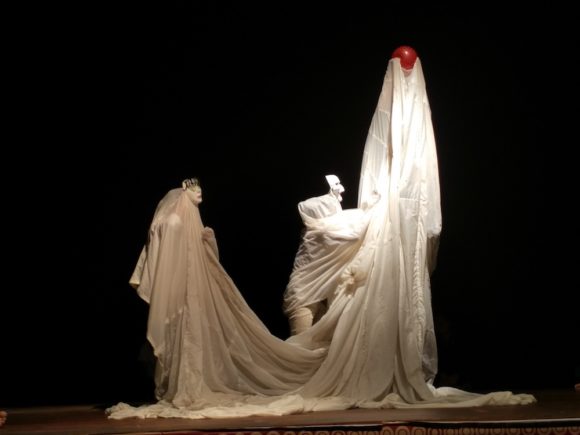 I could sense the joy of the 12 young students and their excitement, especially during the first night’s screening. The setting itself was magical: Yangon was inundated by an unexpected downpour, so the ranks of the makeshift theatre in the Lim Chin Tsong Palace were half-empty. But those of us who made it and the cast were spellbound, and the occasional thunder above us contributed no doubt. 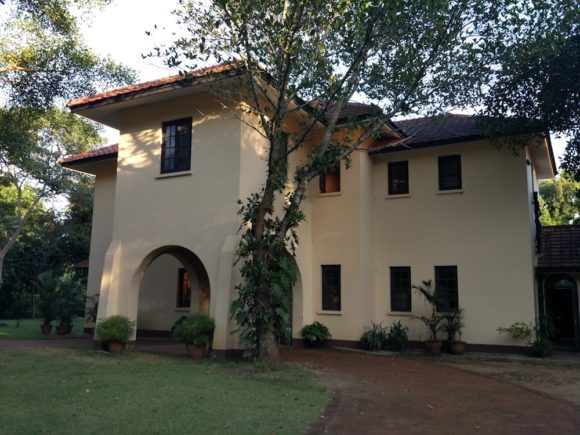 On the way to the airport I stopped by at the U Thant House in Windermere Estate, which I had on my to-do list for quite some time. His grandson, Thant Myint-U found the place in decrepit condition in 2012. The Yangon Heritage Trust has since overseen the renovation and today the small museum is a great little stop on a tour of the city, albeit a little out of the way. The four or so exhibition rooms convey the man’s extraordinary life at the helm of the United Nations in the 1960s.

The last stop before catching the plane back to Tokyo was at Wyne Hotel. My friend Zaw, who I first met in New York, designed and built the place and showed me around the rooms and facilities. It is always great to get a private tour of places we normally consume as clients, and get a behind-the-scenes view of the tourism industry.

In Wyne’s case, I was also interested in the architecture and design given Zaw’s pedigree. There are certain gimmicks which make the place special, such as the cavernous wood installations in the hotel lobby. In a nod to tropical architecture, the sun-facing windows in common areas are tilted sideways to reduce exposure, something not seen often in the glass towers the real estate boom.

I am sad to have missed my friend Heinz Schuette’s book launch on Monday. Published in German, his Yangon: ein historischer Versuch (“Yangon: a historical attempt”) is a remarkable achievement in that it is the to-date most comprehensive urban history that this city has got, at least to my knowledge.

Heinz is a true flaneur, and he enriches his thorough reading of the available literature with on-the-ground observations. His wisdom and Socratic-careful tone come out on each page. I do hope that at least an abridged version of this book will see the light of day in English.