It is done! The book Elliott, Manu and I have been working on for over two years got published earlier this month. 400 pages, 300+ images, almost a kilogram in weight, it’s become quite a tome! Some uncollated thoughts after the jump. 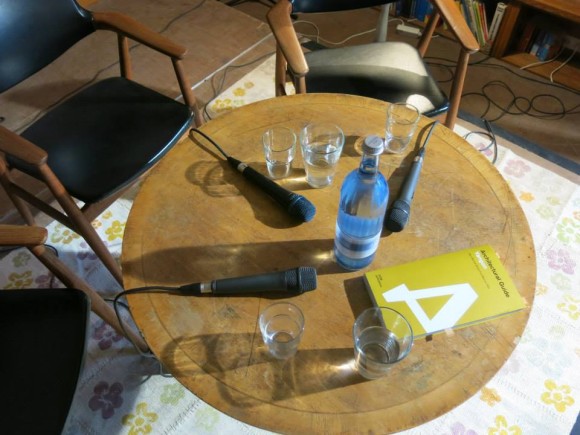 For the launch, Berlin-based DOM publishers chose the historical Karl-Marx-Buchhandlung as the event’s location. With me stopping over in my hometown en route to Japan and Manu in Munich, this worked well for us, although unfortunately Elliott couldn’t join us that night.

Altogether there were about 40 people in the audience, many of them friends and family of Manu and myself. It proved to be a congenial setting for discussing the book and its genesis with DOM’s Philipp Meuser. A relaxed and very supportive environment ensuring surprisingly little stage fright, harmonious with both moderator and co-author: this certainly set the bar high in terms of future book launches!

The days before and after the launch were interesting: the physical manifestation of our hard work was everywhere. Our free copies were to be sent around the world, friends and family wanted theirs signed. In all of this, some melancholy crept in. The most important stage of writing this book was reached.

Time to reflect a little on the way here.

It all started about two and a half years ago. I went on a work assignment to Yangon, and piqued my friend Manu’s interest in the colonial-era architecture. He went himself a few months later and took a first batch of shots. With Elliott we pondered whether we could put this excitement about the city into book form.

I had come to know DOM’s Architecture Guide series through their Tokyo edition, which I had used to discover the Japanese capital during my stay. A comprehensive guide, perhaps a little denser on context and with a smaller number of buildings, was definitely something that would have helped us navigate Yangon. We wrote up our ideas, and had DOM onboard in no time!

We worked on a shortlist and editorial direction for a few months (deciding to cover with equal interest and depth the post-independence architecture, e.g. here), started background research and began working on the manuscript in earnest in the summer of 2014. The first chapter we wrote, in the comfort of my parents’ house in rural Germany, was the one on Botataung township, also the first one to appear in the book.

Except for Elliott’s amazingly productive two-week stay with me in Washington in November 2014 (during which time we went through the bulk of the biggest chapter, on Kyauktada township), all of us three were split across the world. We managed to cope with this using the cloud: it hosted the manuscript, the master research spreadsheet, our interactive maps and all photos. All the while, our popular Facebook page ensured we could check with people on the ground and keep our motivation going at the same time.

The Goethe-Institut in Yangon kindly supported us with a travel grant allowing Manu and myself to travel to Yangon in December 2014. During this time we wrapped up the research and photography for the guide, as well as conducted interviews with a good dozen architects, urban planners, development professionals and others.

The first half of 2015 was then spent wrapping up the manuscript, which ended up being 70,000 words in length. This process should never be underestimated, especially for a book of this size. We were supported by a great amount of people who read the book in its early stages, provided their expertise on architectural questions, and spotted mistakes. A few of them are left, and they’re obviously ours alone!

Holding the book in my hands now, the end result reflects our team’s diverse backgrounds, with an architect and photographer (Manu), an advocacy media/comms expert (Elliott) and myself, a development economist. This obviously comes at a risk: can we satisfy a broad range of readers? How can we reach those who aren’t architects but may expect a different kind of book behind the cover?

These questions are not fully answered yet as the book is slowly arriving in stores and on reviewers’ desks. Most importantly it will arrive in sizable numbers in Yangon soon. Here we hope to strike a few distribution deals with local bookshops so that we can be present in our most important market. Having people use the book on-site will be the litmus test.

Writing this book has certainly given me much inspiration for future projects. Connecting society with space is a fantastic way to think conceptually. It makes my work more tangible, and opens up avenues that I wasn’t so aware of before. Heritage is one of them, and I hope to synthesise some ideas from the guide into an academic paper or two as I get my bearings in my new university life.

My own doctoral work (more on that soon) will also have a strong spatial component in it, one that will ensure that my research will not only take place leaning over academic papers and statistics. Perhaps this will prove to be the most lasting impact of the book on my own future. I certainly hope to visit Yangon regularly. Rarely have I thought about a place as much as the former Burmese capital, unexpected as this may seem to my own self only three years ago.