I’m back from Yangon, where together with my co-authors I launched the Architectural Guide Yangon at the Goethe-Institut Myanmar. A quick summary of the event after the jump. 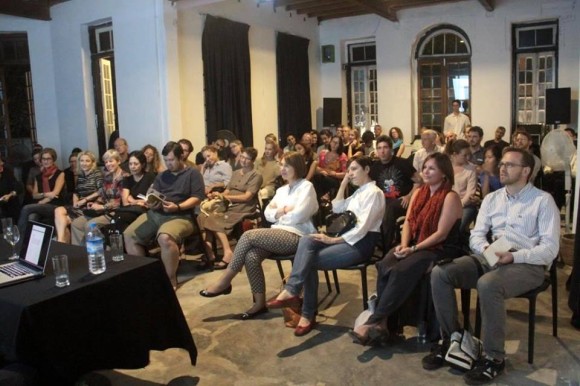 The book launch took place on Saturday, in the Villa Goethe, the institute’s new location soon to undergo a careful renovation. In some sense, we were blessed to be able to speak in the old, raw conditions before work commences. They lend the place an unfinished and transient aura, perfect for exhibitions and launches precisely about these aspects of the city.

The three of us shared the presentation, with Elliott giving a great introduction on why we wrote this guide. In a way, it is simple: there was no book like ours when we set off to write it. He then explained that buildings from the colonial period sparked his interest in Yangon’s architecture initially, something that is valid, too, for Manu and myself.

But having come regularly over the past five years, Elliott said that it was the fragility of the city which struck him most: frequent natural disasters, a British imposition and hence its “unnatural” place in Burmese history, and from 1962 and 1988 onwards, a growing unease of the ruling elite with the city also because of that.

What better way to convey this fragility by introducing the city’s most memorable buildings? Many of them are put at risk not just by the battering monsoon rains and torrid heat, but increasingly also the wrecking ball amid Myanmar’s “opening up” and fast economic growth.

I took over from there giving a behind-the-scenes look into the creation of the guide. How did we choose the 110 buildings? What are these buildings supposed to be saying about Yangon and Myanmar? What were some of the sources we could draw upon so early on in the process?

Manu then took over to go further into detail, showing screenshots of our Google Map with dozens of pins all over it and a huge spreadsheet in which we collected all sorts of information on our shortlisted buildings. After that he detailed his approach to taking the 6,500 photos and selecting from them the 400-or-so that ended up in the book.

Complementing the on-the-ground was our remote research, online and in libraries. I talked about the increasing availability of historical material in digital archives, including places such as SEA Visions by Cornell University or the Hathi Trust, among others. I also mentioned Google Books, because more and more frequently, works for which copyright has expired have been made available there, unlocking a wealth of information that was previously only hard to find.

For all other research needs, the Library of Congress in DC was a treasure trove for me, also for sources in languages other than English (I founds some amazing 1950s Soviet publications on Burmese architecture there). Elliott ventured to the Ford Foundation archives in upstate New York to get information on some buildings in Yangon.

Manu introduced our Facebook page, which since its inception in 2013 has amassed almost 9,000 followers. Many a time, a question posed to our audience revealed important facts, or provoked a discussion which directly or indirectly fed into our manuscript. Through Facebook we also got to know new people who would prove immensely helpful in our research. 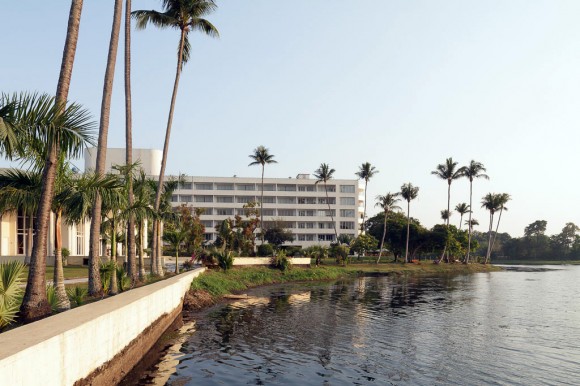 Elliott spoke about the Cold War theme as conveyed by the Inya Lake Hotel (above) and the Engineering College on Pyay Road (now the University of Medicine, below), built with Soviet and American money, respectively. A perfect example of our book’s approach, i.e. using architecture as a way in to the history, politics and economics of Yangon and Myanmar. 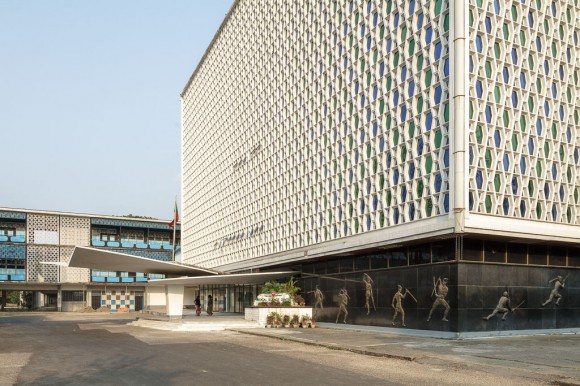 I ended up on a brief note about our thematic insets, which cover more general topics of the built environment and are: waterfront, urban planning, heritage, urban transport, post-1988 changes to the city and Naypyidaw. We felt a few pages on the latter were important so as to provide context for the relative lack of public construction in Yangon over the past 10-15 years.

The 30 minutes we had for Q&A focused on a wide breadth of mainly heritage related questions. These revealed that while buildings capture our imagination, it is often the intangible heritage that is most at risk. Wolfgang Bellwinkel’s concurrent exhibition on the first floor of the Villa Goethe subtly conveyed some of the “vibe” in Yangon’s downtown area.

We also heard from architects in the audience, some of which were involved in renovation works including in the Yangon General Hospital. Ronnie, one of U Tin’s grandson and the architect in charge of the Universities Central Library on the University of Yangon campus, had the final word. He recounted U Nu who had said that Burma needed civil engineers, not architects and that this may be one of the reasons for the low profile of the profession in the post-war period.