How will the 300,000 or so new inhabitants Yangon gains every year live? To conclude a series on slums and the urban poor in Yangon, I wanted to highlight a few items of note I found in a presentation by the Myanmar Ministry of Construction. 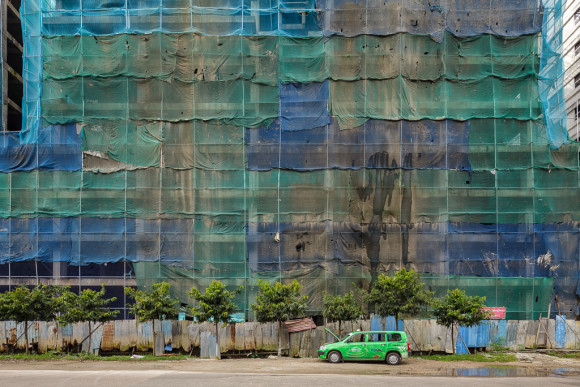 The file (download it here) is already two years old, but contains a decent amount of information in what is generally a pretty data-poor discourse. The reasons for that, as I have noted before, are that there has been no systematic attempt to analyse living conditions in Yangon’s slums as of yet.

And as much of the conversation about Yangon is consumed by heritage and the downtown area it is important not to lose sight of the problems affecting the millions of inhabitants beyond the tourists’ gaze, as well as the millions that are expected to join them in Myanmar’s oncoming wave of urbanisation.

With an urbanisation rate of 32%, Myanmar is not overly “under-urbanised” compared to its level of economic development. Cambodia’s urbanisation rate is significantly lower, while Lao’s is a little higher. Thailand, with about five times Myanmar’s per capita GDP, has about half of its population live in cities.

Given its central part in Myanmar’s economy and with some of the nation’s biggest projects planned in its vicinity (think special economic zones, ports, etc.), Yangon will continue to exert a pull to internal migrants from the countryside. Unsurprisingly, the city’s slums are also the nation’s biggest.

By 2020, the Ministry of Housing expects 4.6 million people to live in slums, up only marginally from 4.0 million it believes are living in slums as of today (p15). Without me having much to back up that hunch, I find this is a fairly optimistic forecast, as it assumes that the proportional slum population rate will decline from its current 30% (p21).

At any rate, the question that beckons is: how to house the urban poor?

Not unlike elsewhere, the government cannot keep pace with the provision of affordable housing. In its (very probably optimistic) assessment, the Ministry thinks that demand for housing is 3.5 times of provision during the last decade (p20). 70% of all new residential units are produced by the private sector, many of which catering to the higher middle or high income groups.

Between 2013 and 2015, the Ministry targeted the provision of 20,000 affordable housing and only 3,000 low-cost housing units. Affordable housing is obviously always a relative concept. Think London, where an apartment counts as “affordable” if its rent is 80% or below market prices. With inflated market prices, 80% are often beyond the reach of even median income earners. I wonder what the measures are for Yangon.

According to the presentation, long-term planning by the Ministry focusses on three areas: new satellite town development, urban densification and existing estate redevelopment.

The first one includes big new housing developments such as Ayeyarwun and Yadanar Housing Project in Yangon’s outskirts, with plans to accommodate almost 100,000 people. As of October 2015, it was about 40% complete. Affordable units here cost more than USD 50,000 and are intended to be sold using mortgages to salary earners. Needless to say, this would exclude most slum dwellers who are either jobless, underemployed, or working informally. The cost of an apartment in the development has also increased by about 20-30% from initial estimates.

With land prices in Yangon extremely high, such developments are almost automatically pushed to the outskirts, creating urban sprawl. One thus wonders whether such huge housing projects are the best Yangon can do, especially when the world abounds with case studies of failed social housing as well as much more innovative approaches to 21st-century urban problems. They may come from contemporary Latin America or even historical Asia (think Tokyo in the 1950s), among many others.

From the looks of it, the third category with which the Housing Ministry aims to provide affordable housing units to the market, ‘existing estate redevelopment’ looks like tearing down old housing blocks and replacing them with more modern and higher ones. The difference here is that these redeveloped complexes would be slightly better integrated into the city.

It may be that the second category, “densification through upgrading”, holds the biggest promise to alleviate the housing shortage. Potential levers include re-zoning, renovation as well as title transfer. Some of Yangon’s slums may even be in a position to be upgraded with in-situ infrastructure investments and “formalisation”.

Much of the above will depend on which path Yangon and Myanmar will travel on economically. With cheap labour amply available, one wonders whether the modus operandi will be to see thousands of workers commute from huge housing developments to large factories in the outskirts or special economic zones.

Alternatively, could there be a decentralised, medium-sized factory model with shorter commutes? Is manufacturing even going to play a major role, or is Yangon destined to follow what we may call an Indian path to contemporary urbanisation with large parts of the slum population trapped in non-tradable informal service sector employment?

All of the Ministry’s plans obviously need to be read with a grain of salt, as they are subject to frequent change in a country as fluid as Myanmar. This is especially valid given the recent change of government. The NLD has campaigned under a substantial set of social policies. It promised to put an end to the forced eviction of squatters as well as controversial land grabs. Whether or not there is a new story on slums and how they connect to the city’s future is still not clear to me.

2 thoughts on “Housing the poor in Yangon”