Our Yangon Architectural Guide features six thematic chapters on various topics to do with the built environment. Upon reflection and with some time passing since we worked on the manuscript, there could definitely be a few more, in particular one on slums. 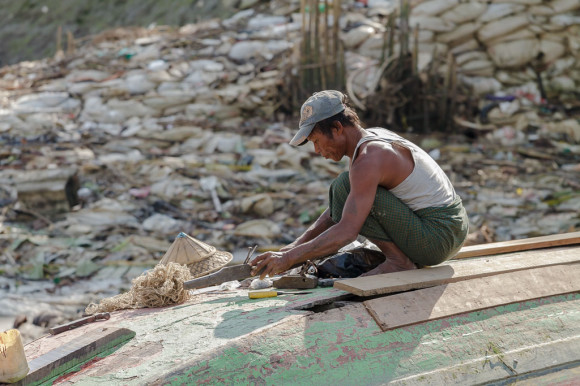 Elliott sent me this article from Myanmar Now, a Thomson Reuters supported news venture. It is a great overview piece on the growth of slums in Yangon amid rapid economic development. Another one was just published, a deeper dive into one of the most “notorious” slums in Hlaing Tharyar Township west of Hlaing River.

The township’s slums overall are home to 700,000 people. The influx of what are mainly rural migrants has accelerated with the economic opening-up of the country. Nearby garment factories are the reason many people have come here in the first place. The conditions are grim, crime is rife and forced eviction hangs over the inhabitants here as a constant existential threat.

It is a shame I have not gone myself during any of my visits to Yangon. While I don’t want to be a slum tourist, I feel it is important to get an idea idea of places like these. Our guide does not paint a rosy picture of Yangon, but it is by definition focused on the more central townships and its buildings.

But the topic of slums is huge and has so far received very little attention in the media. The bulk of Yangon’s anticipated population increase from its current 5 or so million to anywhere north of 10 million by 2040 will be low-income migrants from the countryside. How to employ and house them will be the main question for urban planners.

Inequality will manifest itself ever more extremely in Yangon, and risk reaching levels seen on the subcontinent. Serge Pun’s Pun Hlaing Estate replete with international hospital and international school sits right next to the slum and has been the hook for a few news stories you can find, e.g. here and here.

There are many reasons people will move to Yangon in masses: they will be driven by the economic opportunities here, poverty in the countryside and less restrictions on movement given political liberalisation.

Increasing mobile phone technology will make staying in touch with family in the villages easier; while also disseminating the experience of those who have already gone. Climate change and frequent natural disasters may provide the final reason for many to leave, especially in the vulnerable Irrawaddy Delta, but also elsewhere.

Modernisation of the transportation sector will make it easier for people to travel back and forth. The peri-urban, i.e. the space around the city and between urban agglomerations will increasingly become urban too, a process driven by new and better roads and train connections and population growth.

The agricultural sector will employ less and less people as it, too, will undergo its necessary transformation from being largely subsistence-based to cash-crop-based.

Of course all these trends play out over decades, but is clear that Yangon needs a good strategy to absorb millions of new low-income inhabitants who need shelter and employment. And yes, Yangon has the advantage of being late to the game, in which it can benefit from the experiences of other cities.

Affordable housing is notoriously difficult. Slum clearance and the eviction of its residents to large-scale housing projects have been tried in many places around the world, often with devastating effects. Meanwhile, giving the poor title to their slum plots and trying to induce market mechanisms to slum upgrading has not been shown to be a panacea either.

The most important point is economic opportunity. Millions of slum dwellers in India are locked out of the country’s economic growth story given its dismal performance in creating jobs in the manufacturing sector, especially in and around the megacities where the slums are located.

Cheap labour is Burma’s main competitive advantage at this stage and millions of new jobs are what Yangon will need over the years. Bringing slum dwellers to these jobs may become a real challenge and will require improvements to the transportation system while making sure it remains accessible to the poorest.

These are just some scattered ideas regarding Yangon’s slums. Meanwhile, it will be interesting to see how the story about them gains traction amidst the more “palatable” debates about urban heritage and the (in-)conveniences of inner-city living that our guide discusses.

Yes, perhaps these debates are inseparable. But one of the reasons the slum story has not gained more traction may be that Hlaing Tharyar is so conveniently tucked away out of sight, beyond the other bank of the Hlaing River. With millions expected to join the ranks of slum dwellers, this reality may no longer be so easy to hide.