Mexico City sits on doubly challenging terrain: First, it is situated on top of a dried lake and is sinking by several centimeters each year. Second, it is in earthquake-prone territory with the North American plate pushing against the Pacific plate here. Surprisingly, there is a lot of verticality in the city. And as the city famously chokes on brutal traffic, there are plans to build even higher into the sky, and deeper into the ground. 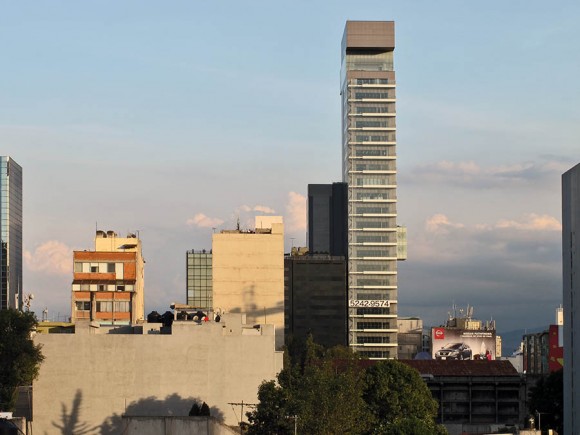 Built in 1956, the Torre Latinoamericana was for several decades the tallest building in the city. At 188 meters, it still is considered an engineering masterpiece, paving the ground for the city to grow into the sky. Tokyo, another metropolis in seismically active territory, only lifted height restrictions in the mid-1960s.

Several skyscrapers followed the Latinoamericana and today exceed the old tower, including the Pemex headquarters or the record holder since its completion in 2002, Torre Mayor (225 meters). 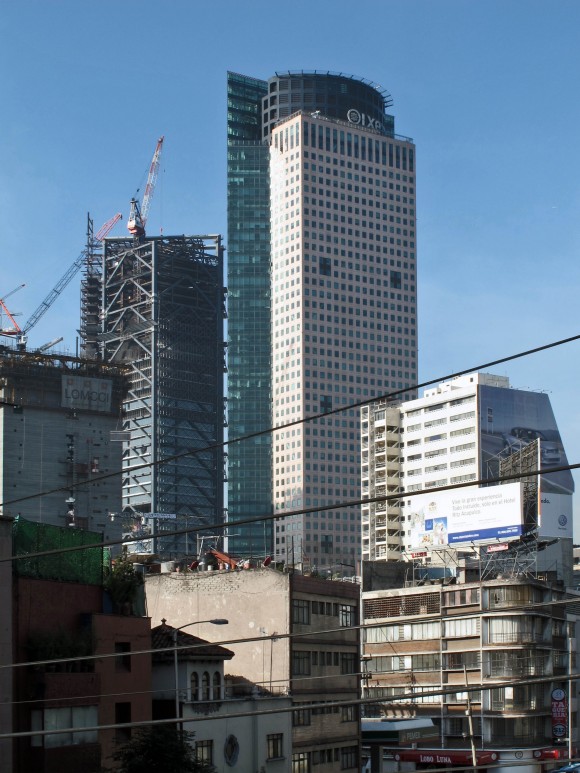 The latter’s record may expire once the neighbouring BBVA tower will be completed next year. Co-designed by Richard Rogers‘ firm, it will exceed Torre Mayor by just a few meters if you include the spire. Other skyscrapers are under construction.

At the same time, there is another direction of construction activity: into the ground.

Given population pressures and a scarcity of office space in the center, unorthodox ideas on how to deal with congestion have blossomed. The most eye-catching one, perhaps, was the “Earthscraper”, an inverted skyscraper going more than 50 stories underground. The project generated some nice PR for its creators BNKR Arquitectura.

Situated in Mexico City’s central district, the Earthscraper is a rejection of its inverted brother. It leaves the visual environment dominated by historic buildings such as the Palacio Nacional intact. I couldn’t find anything on the project after its media launch in 2011, and assume it was filed under “unrealistic pipe dream”.

Whether or not this gigantic sewer can solve the problem on its own I don’t know – but the tunnel currently dug up to 100 meters underneath Mexico City is impressive. It will run 62 kilometers from Mexico City to a water treatment plant at the Tula River. Its diameter reaches 9 meters and once online will transport up to 150m3/sec.