This “forest settlement” in Berlin’s Zehlendorf district is an eerie place. Finished in 1939, the SS wanted only its own officers to live here. The rural architecture is out of place in a metropolis like Berlin, which ventured far down the modern road just a decade before. We came across this important residential complex during one of our cycling trips through Berlin’s southwest. 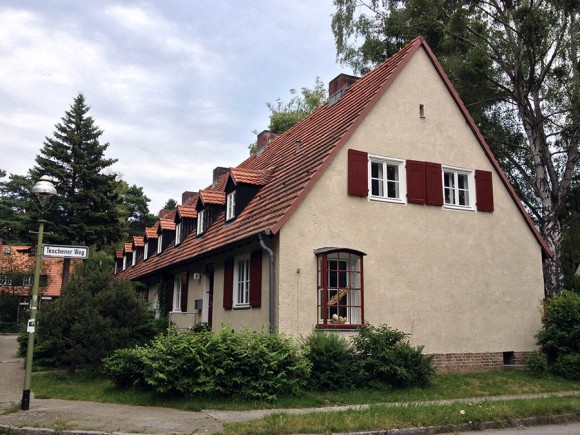 The Nazis had an ambivalent relationship with the urban space. To them, the city was associated with rampant individualism, alienation and above all, organised labour often situated on the far left of the political spectrum.

The NSDAP usually fared worse in urban voting districts than in the countryside. In Berlin, for example, the Communist Party came out on top of the Nazis in the last free polls in 1932. At the same time, the Nazis did understand the city’s potential as a centre of economic as well as cultural power.

This ambivalence was also reflected in German architecture from 1933-1945. Urban building works usually took a neoclassicist form, modernist tendencies of the 1920s (with the Bauhaus movement as the most vocal proponent) were vehemently dismissed as soulless and un-German.

As much of the 1920s rhetoric of the Nazis was anti-urban, a new type of city compatible with their ideology was to be invented. But rather than engaging with the existing city, Hitler preferred grand plans of total upheaval: Berlin was to become Germania, the capital of the world, Nuremberg the city of convention and Hamburg the world’s trade center. Mostly, these plans involved the complete destruction and rebuilding of entire parts of the city.

Fortunately, not many of these plans were actually ever realised: the war quickly turned against the Germans and the ensuing bombardment of most German cities destroyed much of what had been built.

Yet some of the pompous architecture and urban planning can still be seen in Berlin. The Siegessaeule commemorating the victory over France in 1871, for example, was moved to be placed on the new East-West axis cutting through Berlin. The airport in Tempelhof, the convention center in the City’s West End as well as some of todays ministries’ buildings still exist.

The Krumme Lanke settlement is interesting in a different sense. It is Berlin’s only Third Reich garden settlement that actually got built in its entirety and survives to this day. It provides a glimpse into Nazi architecture beyond the usual aggrandising structures. Its size and effect on the spectator are rather modest. 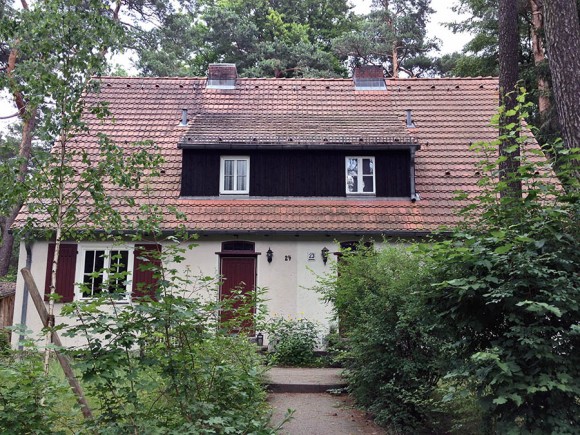 Officers and their families were allocated houses according to seniority and number of children. High-ranking SS officers got their private detached units, middle-ranking ones a unit within a terraced house. Those without family lived in relatively normal 3-storey-tall buildings surrounding the complex and facing the main street, thus acting like a wall to the “normal” world outside this forest settlement. 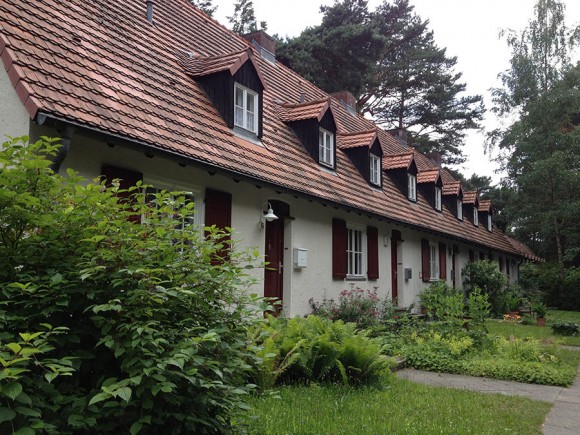 The buildings’ designs were rather small. The SS refused to build the complex on its own watch and thus let a third-party cooperative do the actual construction work. Money was tight, and none of the planned community buildings got realised. In the end, high-level interest in this – for Nazis very progressive piece of urban planning – was low. SS boss Himmler never visited himself, and very few official events took place here.

Most of the men were either dead or fighting when the Soviets invaded Berlin in early 1945. The remaining inhabitants, mainly women and children, had also fled the settlement. Refugees started to move in immediately after. In a symbolic move, the Red Army wanted to reserve the houses for resistance activists.