Tokyo’s skyline is set to see 45 new skyscrapers by the 2020 Olympics, Bloomberg reports. Such heightened construction activity is seen as evidence of 1) the effectiveness of Abenomics, 2) building regulations that encourage new construction and 3) a generally competitive rental market that leads to lower rents. How much truth is there in this? 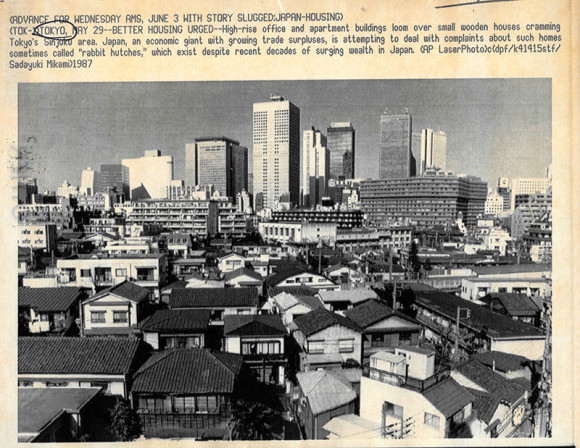 Thirty years and nothing changed?

If you judge the success of monetary stimulus by building cranes dotting a skyline, then Abenomics works rather well. And yet, it is also a sign of Japanese investors seeing very few opportunities to invest money productively, in the real economy, domestically. They instead pour their money into real estate, while investment to GDP ratios are on a long-term decline. Foreign money has contributed to rising real estate prices, especially given the recent yen weakness.

No surprise then that there is aggressive marketing for condominium investments that primarily target older savers. After all, a rental yield of more than 4% beats (non-existent) interest rates on your bank deposit as well as volatile and potentially over-valued stock markets. The market is hot, no doubt, but no one seriously worries that we’re facing a new 1990s-style malaise. However, I think that the recent proliferation in Tokyo’s skyscrapers is a sign of the failure of monetary stimulus, i.e. a misallocation of resources, rather than of its success.

Most importantly perhaps, there is no sign of the boom in these construction projects translating into a faster-growing stock of condominiums overall. This would perhaps be needed to drive down their purchase or rental price and make them more affordable. The annual supply of new condos hitting the market has stagnated at about half the pre-crisis level.

The second argument, i.e. that the proliferation of new skyscrapers is a sign that building regulations in Japan encourage new construction, is certainly true. However, Tokyo’s success as a city is not due to these lax building regulations. It rather is its distinct, low-rise, medium-density and mixed-use model under which the city thrived. This is being put at risk by these developments, which propagate a residential model of large condominium towers next to major transportation infrastructure. This article by Richard Smart has some pointers in this direction.

We are also seeing the increasing securitization of housing. When Japanese real estate economics would normally suggest that a home has completely depreciated within 15 years of its construction (effectively rendering housing as consumption expenditure even when you own), these condos now become long-term investments with a lifespan of several decades. This is good news for the environment perhaps. However, it may also make homeownership an ever more distant dream for the shrinking middle class if housing is now also increasingly becoming a capital investment.

I guess what slightly irks me is that Tokyo is often held to be the poster child for a relatively lightly regulated housing market that delivers great results. This is then measured in housing starts or, as in this example, the building of new skyscrapers. I have covered some of these topics on this blog before, e.g. in a post on zoning or some other more general thoughts on housing. Perhaps the problem of housing being relatively poor in this city is best addressed by forces other than the market.