With a new government coming to power at this weekend’s election here in Japan, I thought I’d put up a shot I took of the Diet Building on Sunday. The Diet hosts Japan’s two chambers of parliament, the House of Representatives and the House of Councillors. When I walk past the building, I sometimes wonder why I am not as interested in the politics of this country as I thought I’d be. 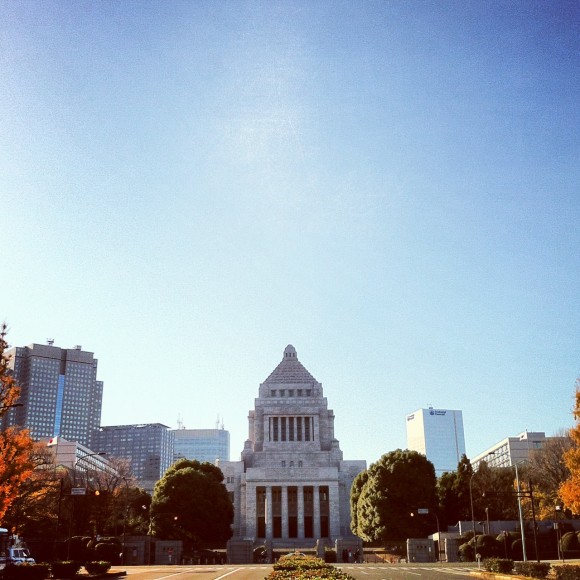 Perhaps it’s got to do with general expat political apathy – we can’t vote, so we don’t care. I had the same problem when living in the Netherlands. It just didn’t interest me as much as it perhaps should have given that I spent four years of my life there. Meanwhile, I still check German media every day and have stayed in touch with politics back “home” over the years, despite me almost never having paid any taxes there.

Another reason for my politics apathy here is perhaps that in Japan, it somehow doesn’t seem to matter much who is in power given that the bureaucracy runs this place anyway. While that may be true in part, I think it’s also a lazy Westerner’s argument that neatly explains all that went right in this country, but on the flipside also all that went wrong (and often leads to premature calls for the dismantlement of the vast apparatus).

Anyway, this weekend, the Liberal Democrats took back the government from the DPJ after having been in opposition for three years (they have ruled most of post-war Japan). The DPJ under PM Noda had promised to take on the country’s bureaucracy, address the ballooning public debt burden and leave the central bank alone. Now former PM Shinzo Abe is back in power and pretty much vowed to reverse all of the above.

I find this inevitability of something nasty happening down the line a little depressing sometimes. Perhaps that’s also one of the reasons why I stay away from Japanese politics – it seems pretty bleak to me.

Oh, yes, the building: you can read much more about it on the Wikipedia page. I will refrain from my usual architecture prattle this time.

2 thoughts on “The Diet Building”