A friend of a friend is a researcher on Japanese public housing projects. Their history is inextricably linked to Japan’s economic miracle from the 1950s onwards. When researching the book, I thought that the chapter on urbanisation would benefit greatly from an inset about danchi.

In terms of migration, the three major urban centres (Tokyo, Osaka and Nagoya) saw net gains of more than 400,000 people between them each year during the 1950s and 1960s, leading to a great housing shortage. Greater Tokyo in particular was growing rapidly. Only in 1973 was the national goal reached and the number of housing units matched the number of households.

Significant parts the new housing stock in the cities were built as danchi – literally “group land” – clustered apartment blocks. In the 1950s and 1960s, these were mainly 4-5 stories tall. (An equivalent design I grew up with was the “Q3A” block in East Berlin.) They later became the ubiquitous banlieue-style tower blocks associated with the social ills of the Japanese “new towns”. This photo exhibition is worth seeing in this respect.

The majority of the Japanese lived in their own four walls back back then already: owner-occupied housing units represented 64.3% of the total in 1963 (vs. 61.1% in 2008). Danchi and/or corporate housing estates were above all erected in the big cities and often provided cheap housing to young graduates coming from the countryside (“golden eggs”) or those on lower incomes.

An Indonesian PhD student wrote about his rather positive experience of moving into a danchi in the 1990s. This report from the Building Center of Japan is great for Japanese housing statistics.

Here’s two more shots I took of a block near Shinagawa (during a sandstorm that hit Tokyo a few weeks back): 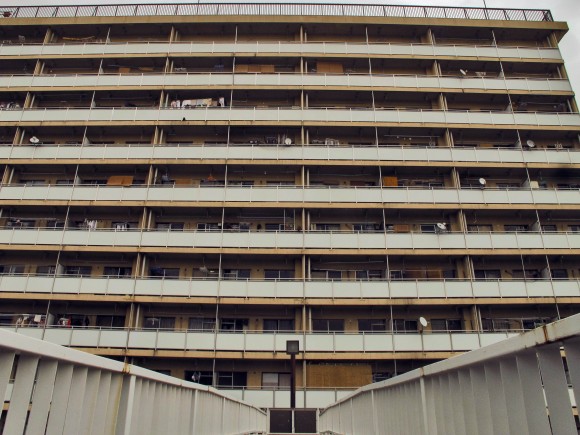 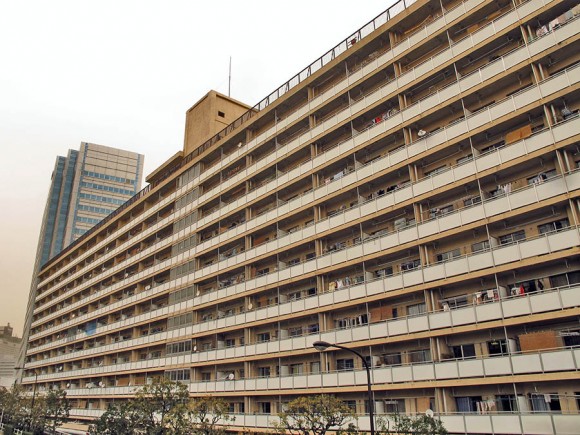