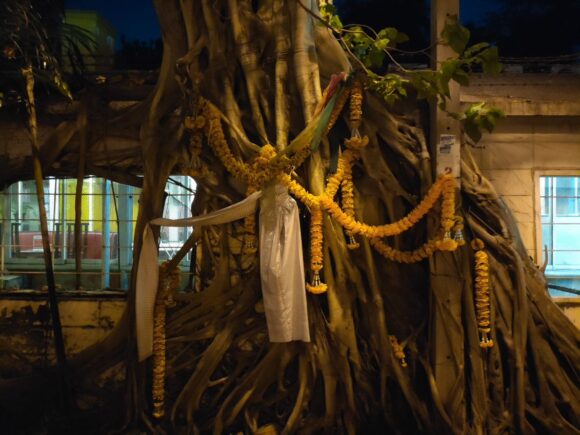 For the lack of better photography, but in need of some color on this page, this tree from Bangkok photographed during a nightly stroll

I am trying to put together a comparative paper on slums in Mumbai and Bangkok, which draws some inspiration from my work on Tokyo. It is basically about comparing the spatial distribution of slum populations across the cities. Some thoughts following the jump.

I chose Bangkok given my recent “residence” there and Mumbai due to my previous interest in the city. Both publish some statistics on their slums, in particular the slum population per ward.

There are of course a lot of methodological shortcomings when we look at such high-level figures, which I won’t go into here, but will delve more deeply into in the article. There is also the question whether we can compare figures between these two cities, e.g. what a slum constitutes in either of them.

My focus is not necessarily cross-sectional though, but a double time series, if you will. I want to compare how inequalities have developed over time in both of these cities as measured by the incidence of slums.

Recent studies on slums have used a litany of newly-available technologies, like remote sensing, satellite imagery etc., to further our knowledge of how these substandard housing districts look, where they are, and how their provision with infrastructure could be improved.

My study instead focuses on large administrative entities like districts and wards, with all the problems this viewpoint brings with it (checkerboard, gerrymandering, etc.).

However, it is crucial for us to understand slums not just as a physical phenomenon or problem that can be addressed by “interventions”, but one that requires more fundamental changes in politics. Think redistribution, the redrawing of boundaries and other administrative reforms. This is also why a time series, be it limited in scope by data availability, is important.

So what does the available data tell us?

I have two data points for each city as per the table above covering a period of 10 and seven years, respectively. I use the Theil index method to calculate inequalities. Bangkok has 50 districts, Mumbai 24 wards.

Mumbai exhibits a small overall decrease in slum population over ten years, with inter-ward variability slightly decreasing. The drilldown into the components is interesting. There is a slight increase in central city and western wards’ slum populations, but a material decrease in the eastern wards. The message is that there are geographic shifts underway in urban poverty.

Bangkok, meanwhile, has seen an increase in its slum population over seven years. Overall the variability has been stable thus increases were relatively broad-based across the three district groupings I have chosen. I would thus argue that at the district level, changes in urban poverty have been relatively even across the city.