I am going to speak at this year’s Association for Asian Studies (virtual) conference, presenting on a panel about Tokyo. This post is meant to reactivate and synthesize some of the thinking from my thesis that so far has not been published and can contribute something new to the debate. 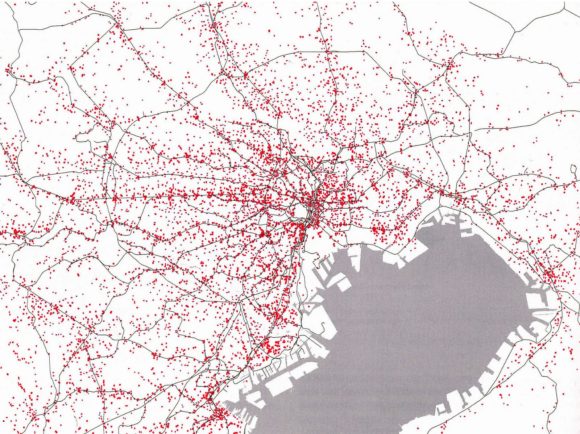 Joe McReynolds, a fellow Tokyo scholar with an impressive breadth of interests, is organizing the panel which means to cover the “human-scale built environment of Tokyo and the building of local community in the megacity”. My contribution is announced as being on Tokyo’s evolving approaches to urban space from 1950 to 1975, discussing the ways in which the Tokyo of the postwar decades helps explain present-day Tokyo.

For the conference I will try to chart some new ground by way of synthesizing my prior work and not going into detail of what is already published or on the path to being published. Two of my main papers coming out of my dissertation are basically done; i.e. one is already published (labor-intensive industrialization) while another has been accepted for publication later this year.

One thing Joe seems keen on extracting from the varied presentations (most of which focus on present-day Tokyo) is getting a better idea of a “Tokyo Model” that can explain the success of this vast megacity. I have pondered that term quite a bit myself for my dissertation.

I also asked my students to consider it throughout the Metropolitan Tokyo class I taught at Temple University Japan. This inspired a first idea on how to address the panel one that is, alas, out of my realm of expertise:

One great contribution to this panel would surely be to speculate about / redefine the parameters of a “generic neighborhood” study. In a way, this would culminate in an “anthropological trilogy” and continue the work of Dore and Bestor, both of whom did neighborhood studies of anonymized Tokyo areas. These took place in the 1950s and 1970s, respectively, and I always asked my students what they thought were some of the continuities between them, but also regarding present-day Tokyo. I’ll keep this in mind for a future assignment / blog post for quieter days to come.

Back to the AAS panel again, a few avenues for my own presentation based on original research, off the top of my head:

So, in a nutshell, how can we understand the present-day “Tokyo model” from a viewpoint of an urban geographer / economic historian interested in the postwar period?

I’ll come back to this post with a fresher mind, but I feel better prepared to tackle this return to the academic stage already.