My paper in SSJJ explored the supply side of labor-intensive industrialization in an urban setting. It argued that it’s useful to conceive of urban space as a factor of production, like land once was before the neoclassical revolution. The following post shows how it is also useful to consider the urban dimension on the demand side. 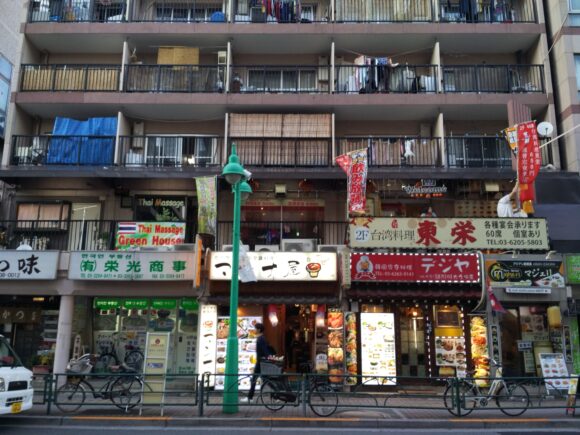 My PhD supervisor Professor Kaoru Sugihara suggested that I include such a section in my dissertation. After spending a good deal of this chapter on labor-intensive industrialization on supply side factors accounting for the success of small firms in an urban setting, he thought it would be good to understand whether these firms were also benefiting from specific urban demand patterns.

While not a core thrust of my argument, it cannot be left unmentioned. This is particularly true for the subcontracting networks many successful small factories were part of. This post, however, is mainly about the other aspects I develop in my text.

Combined these argue that Tokyo’s small firms were successful because of the vast, affluent and diversified market they produced for. This might appear like a very intuitive point, but it is important to make it nonetheless. These small firms were exceptionally well positioned to cater to the varied tastes of their customers and be more flexible than their larger peers. While not a straightforward demand-related aspect, small factories also benefited from a large number of commercial wholesalers in the ward area that bridged supply and demand, with peculiar urban characteristics once again.

The small successful firms that were so characteristic of postwar Tokyo catered first and foremost to the metropolitan market, whose size rivalled that of major industrial countries. Historically, Edo/Tokyo did not only have a significant population but also one with enough disposable income to purchase a large variety of products.

This pattern continued into the postwar period: the large number of households in Tokyo (reaching as much a quarter of all Japanese households living in Tokyo and the three adjacent prefectures by 1970) had 20% more consumption expenditure than Japan as a whole in 1960 and spent a lower proportion of their income on food.

A large urban market would theoretically benefit both small and large firms. In fact, in an economies of scale model, it would favor large mass-producing factories. The argument hence needs further refining: In Tokyo’s case, this huge urban market allowed many small firms to specialize in final niche products, giving them an edge over larger firms.

Many of the products during this time were not easily mass-producible and transportation cost were high enough to produce them close to the final end consumer (e.g. handmade pottery, tatami mattresses, customized furniture, etc.). Homogenous neighborhoods translated into relatively stable catchment areas for these factories and allowed for their replication across the wards.

A good example for the urban characteristics of demand benefiting small firms is the printing industry, which employed a whopping 17% of all ward-area manufacturing workers in 1970. Its importance was by and large due to the robust demand for custom printing services from government and academic customers. I write in my dissertation:

Other final products also favored small factories in the 23 wards: The printing industry is as a good example. Pre-digital printing was a labor-intensive process, more so in Japan than in the West given the Japanese script’s much more extensive requirements in terms of typesetting equipment. Traditionally, publishers have therefore contracted out their printing rather than print in-house owing to the complex requirements in terms of machinery and especially skillset of the printing specialists. Moreover, the Japanese bookbinding sector usually requires short production runs and a high degree of customization, further favoring small firms that are more flexible and willing to take on low-volume business at short notice (United States International Trade Commission, 1983).

The love for detail and the quality of printing products is probably second to none, as specialists from other parts of the world can attest. The government and higher education institutions were among the most important customers of the printing industry and usually required small and custom print runs, benefiting small printing houses.

As mentioned above, a further and extremely important facet of demand is related to subcontracting networks that connected the ward area to larger industrial manufacturers in the Kanagawa/Chiba industrial belt. I might put up a separate post on that, although the SSJJ article has a decent chunk on that (see link above).

A great article to read on the innovative capacity of Tokyo is by Fujita and Hill (here) and a lot of its points can be applied to my period of observation (e.g. antenna districts, product-pull and market-in, all with implications for small factories in the ward area).

Finally, when it comes to distributing final and intermediate products, small firms can be at a disadvantage compared to larger firms which have their own in-house distribution channels, e.g. a fleet of delivery trucks.

For smaller firms in Tokyo, a disproportionately large wholesaler community leveled the playing field. By 1970, there were more wholesalers per population in the ward area than in the traditional distribution center of Osaka. The average wholesaler also had slightly more employees than the national average.

While most of these wholesalers had their operations situated in the central wards of Chiyoda and Chuo, there were important exceptions that mirrored the structure of the manufacturing sector. Most electronical wholesalers for example were in Minato, furniture wholesalers in Taito or recycling wholesalers in Arakawa.

The above sketched a few contours of the role (urban) demand played in explaining small factories’ success. Why is this important in the grander scheme? Because we