When skimming the back archives of this blog, I came across a farewell bid to Tokyo back in 2013. My wife and I had just spent six months there – her working and me taking a sabbatical that was to spark a passion for the city. We went back to Tokyo again in 2015, and left quite a long time ago in 2019. This reprise is thus long overdue, especially given the recent dearth of personal posts. 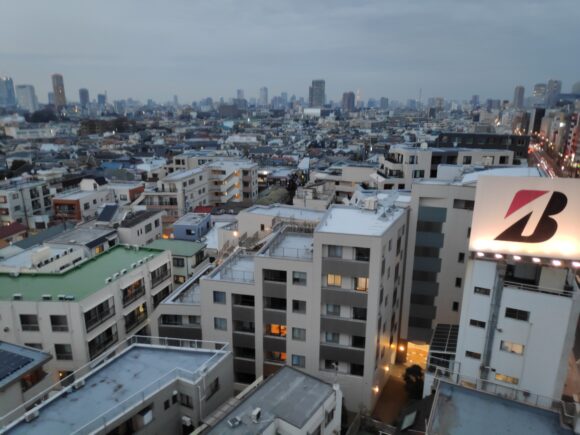 View towards center from a rooftop in Meguro-ku

Back seven years ago, I thanked Tokyo for teaching me something about myself, i.e. that I needed a distraction from the abstract and connect with physical space. There was ample opportunity in the architecture and urban space.

Serendipity is perhaps the best medicine when feeling a little disoriented about one’s own journey in life, and you, Tokyo, offered plenty of it. Lurking in the dimly-lit backstreets, the neon-blazing station plazas, or in the many beer-fueled late nights with old and new friends.

Today, more than eight months on from my latest departure, my relationship with you has become more complex. This most recent time around, I stayed for more than four years as opposed to the six-month sabbatical back in 2012/13.

Which, on top of that, was spent in the corporate comfort of a serviced apartment in Mori’s ARK Towers in Roppongi. The second time was a lot closer to a “normal” life, for whatever that may mean.

The seeds for the second stint had been sown in those six months for sure. An initial idea for pursuing a PhD must have come about at some point when I thought about editing a book on Tokyo’s urban space.

I had already lined up an impressive list of people, but soon realized that serious scholarship might take longer and a lot more of my own research initiative. An economist by training, I brought this together under the banner of urban economic history and set sail for a little more than three years of library-filled days.

So, back to the start of the post: Thank you, Tokyo, for giving me the space to be a scholar. Knowledge about you is accessible in many libraries, and can be experienced first-hand on the walk home. Despite its futuristic appeal, there aren’t many cities in the world in which the continuities with the past are so tangible as they are here.

Thank you, Tokyo, for rewarding this curiosity with providing a real place to call my home. This, after London, must have been the first time I really felt like this in one particular place. From the first two and half years in Nakano (courtesy of my university GRIPS providing subsidized student housing), to a further two-odd years in Musashikoyama, the fond feelings for this city extended onto a deep local level.

Thank you, Tokyo, for being amazing to “mature students”. Having spent all of our savings in a year in New York, we experienced Tokyo on a shoestring during the first few years. Despite being one of the most expensive cities in the world, there were myriad ways to experience the place without much money in hand, and I am not just talking about cheap but good restaurants and bars and amazing discounts on concerts.

Thank you, Tokyo, for being the birthplace of my daughter. Yes, this must bring any place closer to your heart thanks to the intensity of the emotions. While being a pregnant woman is certainly harder here than in some of the places I/we lived in before, the kindness toward our child shown by the midwifes in the Gotanda hospital, the teachers at our daycare, and oftentimes strangers on the road, was disarming. I have real trouble avoiding tears watching any of the Miyazaki films, and somehow I associate my time in Tokyo/Japan with seeing the world through the eyes of a child once again.

Thank you, Tokyo, thus, for allowing me to spend a good deal of my thirties in your bubble, sidestepping a life of more continuity — be that a continuity of career or of place. One of my close friends described you as a cheat code for life. Being a student and freelancer here is arguably the best way to maximize that lifestyle, given that people work incredibly hard here and are often pretty miserable about their day to day life as they are in other big cities.

Alas, after a little more than four years, it was time to go. My daughter began to speak better Japanese than me. My wife’s and my professional future was not in Japan. It was thus only a matter of time before we would leave (although we might come back one day, who knows). When the opportunity came, we moved to Bangkok in December 2019. It wasn’t long-lived, as COVID-19 made us move onward to Germany in March 2020, at least temporarily. But that is another story.