I have been amiss not to post a link to my PhD dissertation, which has been published on the website of my former university, the National Graduate Institute for Policy Studies, about a year ago. The title is “Urban Space in Economic History: Tokyo as Asia’s First Megacity 1945-1970”. Find the summary after the break. 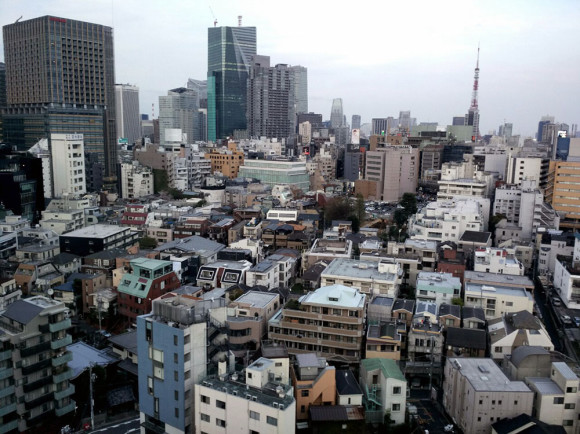 There are quite a few sections in there which I would like to branch out, extend and polish for publication. Some fragments will likely only live in this document. Let the power of search engines and indexation make them discoverable if they’re helpful to anyone. There will also be a few posts on this blog recycling and summarizing a few sections, in order to keep my memory fresh and help connect some dots for future work.

This dissertation addresses the role of urban space in the postwar economic history of Tokyo. It argues that the Japanese capital followed a peculiar pathway to urbanization in this period and did not adhere to conventional and Eurocentric models. Mixed-use neighborhoods, permissive zoning and an intense use of space particularly benefited the successful small and medium sized manufacturing sector. Embedded in the urban fabric, these factories employed a substantial amount of the workforce broadly across the city. Its production processes were labor-intensive but remained competitive as Japan experienced rapid economic growth and underwent industrial upgrading. The territory of the city, here defined as the 23 central wards of the Tokyo prefecture, was also an egalitarian space. There was little to no spatial stratification, while some differences between the wards even declined, particularly in the case of living standards. There were both organic and broader institutional forces at play: As the city expanded, some generic neighborhood features reproduced themselves automatically, e.g. a set of private commercial establishments that allowed residents to economize on limited space. The Tokyo Metropolitan Government (TMG) was a powerful intermediate layer of government that redistributed from rich to poor wards. However, TMG did not have the financial and human resources to spend on and oversee large-scale urban planning. This left Tokyo to grow haphazardly, with many of its neighborhoods being upgraded in situ. By drawing on ward-level statistics, this dissertation presents its data on a more granular scale than traditional economic history analysis. It also utilizes variability metrics that deepen our understanding of socio-economic processes taking place across cities. This allows for a reevaluation of Tokyo’s experience from 1945-1970 with a spatial lens, which has implications for the urban development discourse in other Asian megacities and beyond.