With Ichibankan (“Building Number One”) and Nibankan (“Building Number Two”), Minoru Takeyama created two postmodernist icons in a part of Shinjuku that is generally known for its sleazy nighttime buzz. Its nondescript buildings usually only come to life at night when they’re illuminated by neon advertising lights. Takeyama’s towers, however, carry some of that “charm” into the daytime. 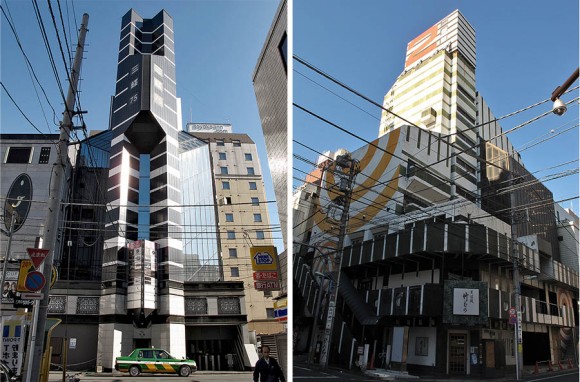 The Ichibankan (left) has recently been renovated and looks polished in comparison to its younger sibling the Nibankan, which in slightly dilapidated form stands a few meters down the road. It seems that the more colourful building is undergoing some fire safety “checks” at the moment. There are no tenants left and frankly, it looks as if it could be torn down any day.

Both buildings are considered to be among the first examples of “a new avantgarde spirit following WWII”, as Ulf Meyer’s Architecture Guide to Tokyo explains. Ichibankan used to house 49 tiny bars on its eight floors (evidently less now), whereas Nibankan was once the home of numerous bars, clubs and saunas.