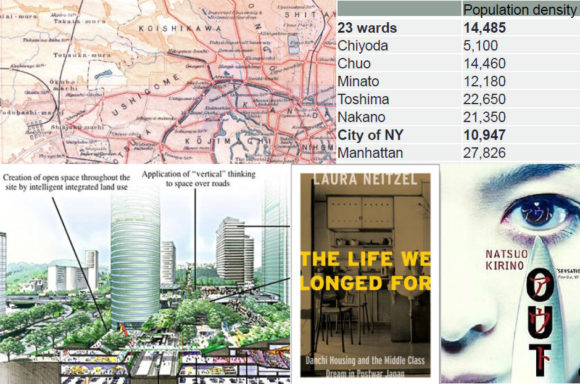 The last of four posts sharing my TUJ syllabi is Metropolitan Tokyo. I probably put most work into this class: It was the one closest to my own research, the bar was high and I kept adapting the syllabus the more I taught it, in total five times over two years.

Although all classes at TUJ need also to be taught at main campus, Metropolitan Tokyo is one of the obvious exceptions. When I started teaching at Temple’s Tokyo satellite campus, it had not been on the curriculum for a few years. Prior to that, the course was taught by people from a variety of backgrounds, including urban geographers and architects.

One of the challenges and privileges of teaching such a class is that there are hardly any comparable English-language courses taught around the world that one could draw inspiration from, or that could have collectively spawned a textbook. Given Tokyo’s size as the biggest urban agglomeration in the world comfortably on par with G-20 nations, that is maybe a little surprising.

From what I know, there is a class at Harvard that is being taught by the great Theodore Bestor and several urban studies courses taught in Tokyo that are mainly on Tokyo, e.g. at Sophia University. Christian Dimmer has been teaching urban studies at Waseda and focuses on Tokyo.

Many noted academics with extensive Tokyo experience teach urban studies classes, often drawing on their research on the Japanese capital. These include Jordan Sand (and his Approaches to the Modern City at Georgetown), Paul Waley at Leeds, Andre Sorensen at Toronto, and many others.

Suffice it to say, a class called “Metropolitan Tokyo” leaves it up to the instructor which spin s/he wants to give it. My background as an economic historian informed a lot of the syllabus, although I tried to be as interdisciplinary as possible to make it fun for liberal arts undergraduates. The size of the class was between 15-30 students, with a large proportion of exchange students (who spent a semester at TUJ) from all over the US.

The reading list is rather ecclectic and omits some of the few classics, e.g. Seidensticker’s standard text. I made sure that my students were aware of its existence and many of them quoted him in their written work.

At the risk of sounding a little megalomaniac, there is clearly no better way of learning about a city than to teach a course about it. Now being away from it all makes me wonder what immense privilege this has been, i.e. being allowed to stand in front of students learning about this amazing city together. Onwards with the practicalities:

My intro read: “Tokyo is a megalopolis bursting with superlatives: More than 30 million people live within a 30-mile radius of Nihonbashi Bridge, making the urban agglomeration the largest in the world. The city’s efficient public transport system brings millions of workers to and from their workplace every day. The Metropolitan Government commands a portfolio that puts it comfortably on par with that of a G-20 nation. Tokyo has many of the features we associate with a globally-systemic megacity, but also an urban pattern that is almost uniformly low-rise and medium-density. This interdisciplinary class will acquaint students with the tools to approach this fascinating city. After contextualising its position in the world and Japan, as well as learning about the city’s political geography, this course will chart Tokyo’s historical development over the centuries. The course will then introduce famous areas using a thematic approach. We conclude the course by looking at aspects of everyday life as well how memory and places are made. All throughout, students are expected to perform tasks outside of the classroom.

The course should acquaint students with the intellectual ammunition to answer (some of) the following questions:

The analytical tools covered in the class extend well beyond Tokyo. Students will:

The assessment for the class included three “out-of-classroom activities”, i.e.:

First out-of-classroom activity report 15%: This assignment (about 2-3 A4-pages) requires students to visit the Edo-Tokyo Museum and discuss several questions focusing on the Edo and Tokyo periods. Students are also required to reflect on the culture and tradition of memory and commemoration in this city.

Second out-of-classroom activity report 15%: The second assignment, also on about 2-3 A-4 pages, will see students visit one of the famous areas portrayed in the third section of the class (Roppongi, Yanesen, Toranomon, Shibuya), reflecting on the relevant class’s contents and finding evidence to support (or refute!) its main tenets.

Third out-of-classroom activity report 15%: This assignment will focus on the built environment. Students can choose one building, architectural structure and, on 2-3 A4 pages, discuss its history, context, and meaning for Tokyo’s history. These don’t need to be famous structures but can also be ephemeral details or quirky but symbolic features of the city, for example, a “Thomasson”.

The presentations (15%) tasked the presentations to introduce a film about Tokyo, or do in-depth research on a building and its place in the city’s history. A final essay (30%) and class participation (10%) constituted the remainder of the total grade.

I had a total of three guest lecturers speak to my students: Dr. Chelsea Szendi Schieder of Aoyama Gakuin on postwar political protests in Tokyo; Dr. Maho Ikeda of Hokkai Gakuen University on the political history of Meiji Tokyo; and Norio Yamato of the Mori Memorial Foundation on his organization’s vision for Tokyo. The latter’s multimedia-heavy presentation was a great finale to the class.

Let me know if you need more details about this class or any of the assignments, lecture notes etc. It would be great to hear about what teaching there is on this great city around the world.