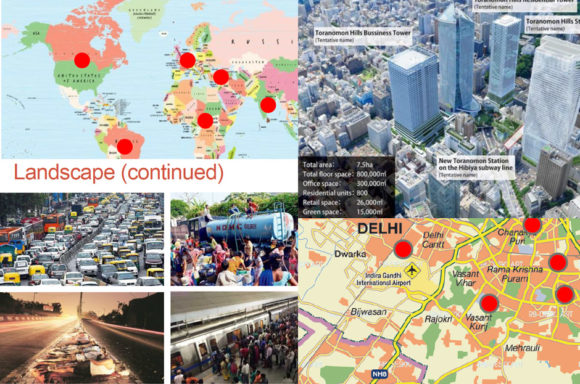 The last of my four classes I taught at TUJ was this general education — “Gen Ed” — urban studies class, which TUJ ran for three consecutive semesters. Looking back, this may have been the most enjoyable of the classes of the four I taught in Tokyo. (I have also added the syllabi for two other classes I taught, i.e. Politics of the Global Economy and Economics of Development and Growth and will shortly put up the one for Metropolitan Tokyo.)

Classes at TUJ generally need to have their equivalent at Temple University’s main campus in Philadelphia. From the beginning I wanted to stretch my teaching to cover my “new” academic terrain, i.e. urban studies, rather than my original turf development studies / economics. Looking through the curriculum, a so-called Gen Ed class called “Global Cities” caught my eye.

Gen Ed classes are basic classes all liberal arts students have to take regardless of what specialisation they may later choose. This usually gets you a bunch of first-year students as well as those not likely to pursue urban studies later in their academic life. That’s a double challenge but also a great chance to have students who are curious, motivated, and think outside the box.

The intro text on my syllabus read: “In 2007, the global urban population outnumbered the rural population for the first time in mankind’s history. It is no exaggeration to call the 21st century the “urban century”, especially as this urban growth shows no sign of abating, particularly in the developing world. By 2050, the UN projects two thirds of the world’s population to be living in cities. An ever-larger share of the world’s problems, but also most of its opportunities, have hence taken on an urban dimension: Cities are at the forefront of development; slums and urban poverty are the most visible manifestation. At the same time, urban population densities and infrastructures may yield the only viable per capita carbon footprint a growing global population can afford in order to avert the catastrophic effects of climate change. Cities are “at the center of the political and economic processes and social relations that shape and define the contemporary world”. This course will introduce students to what makes cities distinct and to explore how their fates are intertwined thanks to “globalization”, an expanding and contested phenomenon. We proceed regionally, looking at the economic, geographic, political, and cultural processes that shape cities and the lives of the people who live in them. As globalization accelerates, we increasingly live in a single, interdependent urban world. Yet every city has its own history, economy, demography, and spatial form. This course seeks to understand this diverse yet hyperconnected urban world.”

The main campus class used a textbook so I followed suit:

Looking back, I have mixed feelings. Although the book explicitly states to be suitable for both undergraduate and graduate-level teaching, I found it to be on the difficult side for my class, and perhaps at times a little dry. It takes a regional approach and I thus structured the course as a journey around the world.

Gen Ed classes are about transferrable skills and exposing students to a way of learning. I therefore assigned each region with a specific learning outcome. I put up a few blog posts on these already and have linked them below if you’re interested in finding out more.

In the North America sessions, students had to prepare a class presentation on gentrification. In Europe, they had to come up with an essay plan. In the Latin America sessions we familiarized ourselves with case studies (i.e. read a chapter of “Radical Cities”). In Sub-Saharan Africa, students had to present on academic research, e.g. a journal article. In South Asia, they read literary non-fiction. Finally, the East Asia classes culminated in their final essay. We also had a class on Middle Eastern cities, in which we thought about place-making and gendered spaces.

I think the reason I enjoyed this class was that I learned a lot about the world’s cities myself, and better understood the place of my own research within the field. The big questions I asked at the outset would also become guiding principles for my own PhD dissertation, which I wrote at the same time. In many ways, they helped me conjure up the “bigger picture” of my research:

Grading for this class was a little fragmented in order to give students the chance to compensate for a mishap here and there: A fifth of the grade came from the five categories of class participation, mid-term exam, reading quizzes, class presentations and final essay, each.