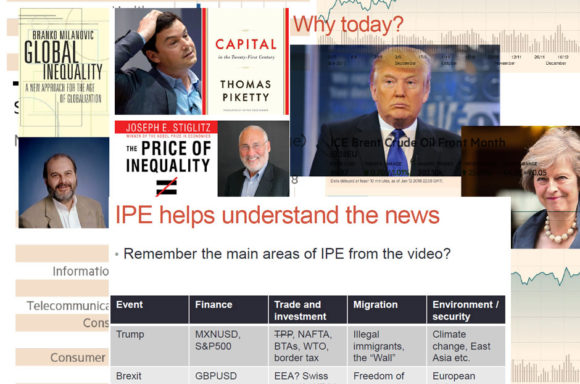 Another syllabus of one of the classes I taught at TUJ after the jump, this time for a course called Politics of the Global Economy. This was a more or less straightforward undergraduate IPE class following a standard textbook. Do get in touch if you need any of the lecture materials or want to hear more about the course.

Politics of the Global Economy

I taught this class four times and drew quite a mixed group of students as many needed an “international affairs” credit. There were usually 20-30 students, except for one summer term, when we were only five or six (and which was great). I later dropped this class so I could focus more on my urban studies courses, which I will introduce in more detail soon. Looking back, however, this class was an amazing opportunity to connect with the diverse TUJ student body and understand how they see the world.

“This course will present an overview of the main theories and issues in the international political economy (IPE). IPE is an interdisciplinary field in political science that is concerned with the way politics shapes economic interactions on a global scale. With the main theories addressed in the beginning of the course, we will explore how global capitalism developed over the last five or so centuries, and why so many parts of the world today remain “underdeveloped”. This historical section will allow us to better understand today’s main issues in IPE, e.g. trade, financial markets, foreign investment and migration. We conclude by looking at other aspects of IPE, e.g. inequality, gender, the environment, and security.”

The textbook I used is Robert O’Brien & Marc Williams, Global Political Economy, 4th or 5th Edition, (New York: Palgrave MacMillan, 2013 or 2016), which I found well-written and “modern”. As I am no specialist IPE scholar, however, I would be hard-pressed to compare it to any other major text (I only skim-read a few others!).

Among the main questions we asked were:

And again some “promises” made at the beginning of the course. By taking the class, students will:

Here is the overview of the classes. Note that scheduling in that semester saw the class run one-hour slots, explaining the large amount of sessions.