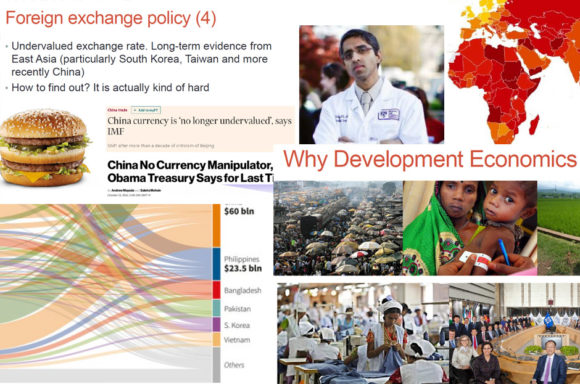 This is the first of four posts showcasing the syllabi of the courses I taught at Temple University Japan (TUJ) over the past three or so years. The first one is on Economics of Development and Growth, a development economics class I taught to third and final-year students.

Although I really enjoyed this class, I only taught it twice, each time with a good number of undergraduate students (20-30, ideal). The intro text reads:

I used Todaro, M. and S. Smith (11th edition, 2011), Economic Development, Prentice Hall – a standard text which I followed more or less stringently during the lectures.

A few exceptions were the “excursions” into critical development studies, urbanization and international finance. The latter section saw a guest appearance of my good friend Stefan Angrick.

Among the questions we asked throughout the course:

I “promised” my students that by taking this class they could:

I took time to go over the central graphs and charts in Todaro’s text, which are probably one of the more difficult aspects as the book is generally very well-written. I also used quite a lot of videos, and somehow many of them tended to be about Bangladesh.

All in all a tremendously enjoyable class that helped me refresh my own academic background and become more up to date with the main discussions in the field. I would love to teach one of these classes at some point again.

Here is an overview of the classes: