Several classes at the beginning of the Metropolitan Tokyo course I teach at TUJ are dedicated to establishing a context for analyzing the Japanese capital. I comment on these lectures after the jump. 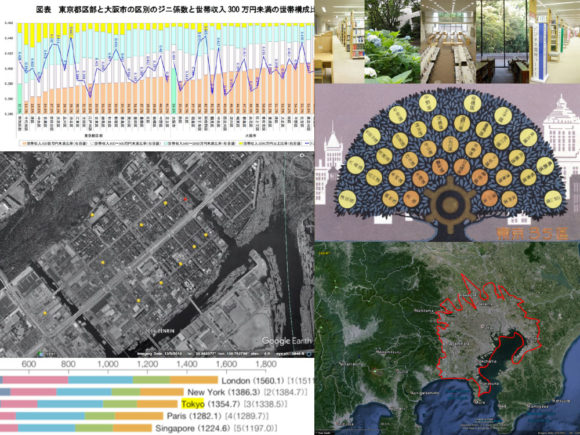 The four classes are titled a) Defining Tokyo, b) The 23 Wards, c) The Tama Area and d) Tokyo Within Japan and the World. At first I thought about making this section last a little longer, but ended up combining some topics and spending more time on the subsequent history part.

The first class, “Defining Tokyo” is really about making students aware of the various concepts and uses of the word Tokyo. I zoom in on the UN’s definition of urban agglomeration to link the status as the world’s biggest city to this concept and how Tokyo compares (and is expected to compare) to other megacities in the world.

Next up are definitions of the prefecture, the 23 wards and the Tama region. I urge students to be careful about their usage of “Tokyo”. This has shown to be effective (to some extent) in subsequent class assignments.

Previewing some of the contents from the history section I show how different the various entities are in terms of their population (NB: not all data is available for all years, sources are primarily TMG and UN): 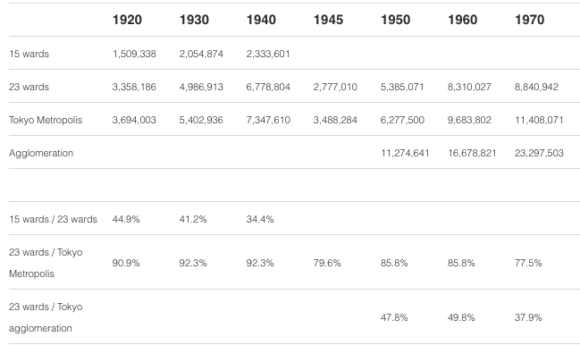 This first contextual class also introduces some research methods this course is exposing the students to. (Note that this is an interdisciplinary class taught to liberal arts undergraduate students as part of the Asian Studies department’s offering.)

These methods include GIS (showing several examples on the board), statistics (showing the Tokyo Statistical Yearbook) as well as qualitative research. I hope I have increased my students’ awareness of the different social sciences and their approach to the city, but perhaps this can be done in a more structured way, even by means of a dedicated class in the future.

I have been urging my students all along to think of their assignments in terms of a clear hypothesis. This has been challenging to some extent, also as I practice articulating myself and using better examples as we go along. I want to spend some time on this point in a separate post on assignments.

Next up is the class on the 23 wards, in which I also present the first assignment, i.e. a ward profile. (As said, I will put all assignment details in a separate post.) The 23 ward area is the urban core of Tokyo. However, it is an administrative creation whose nucleus, i.e. the 15 “old” ward area, is the most contiguous with old Edo.

Without going into too much historical detail, I show by way of maps how the 15 original wards were complemented by the outlying gun / counties to eventually form 35 wards in 1932, then 22/23 wards after the Second World War.

Some data on the variability of the wards follows (population, density, area). A consultancy report by LSE professor William Robson, written in the 1960s for TMG, has some interesting echoes with regards to today. I end up with a list of ward responsibilities and an assessment of how autonomous they are in comparison to other sub-municipal layers of governance around the world (some more work to go into this section for the next run).

The next lecture covers the Tama region, i.e. the Tokyo prefecture minus the 23 ward area. Before going into some numbers, we look at Tama New Town and Hachioji as two distinct places in this part of Tokyo. The concept we explore in this class is “daytime vs. nighttime population”, and with it also how to pull information from TMG’s Statistical Yearbook.

The next class explores Tokyo’s role within Japan and the world. For the first part, I have the students read about the “unipolar concentration”, i.e. the overwhelming importance of Tokyo’s urban agglomeration to Japan in almost all respects, and in how far it has been increasing over the last decades.

For the “world” part, we go through Saskia Sassen’s seven hypotheses she postulates in support of her Global Cities concept (1991). (How) does Tokyo fit into this? We time the gestation of the book with the height of the bubble era (late 1980s) and agree that Tokyo is not nearly as dependent on finance and its supporting networks as was/is London and New York.

However, indices like the Global Power City Index (Mori Memorial Foundation, based in Tokyo) continue to list Tokyo as the third most “globally powerful city”, an undeniable fact it seems, if only due to the city’s sheer size.