This is the first post in a series of summaries of and notes on my lectures for “Metropolitan Tokyo”, a class that I teach at Temple University Japan. I have written more about it here. 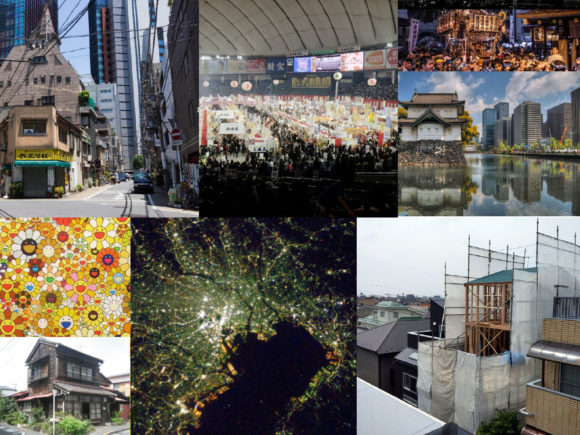 This may sound easy-peasy for hardcore pedagogues, but I’ll write it nonetheless: The opening lecture of any class is tricky, especially so if you teach it for the first time. You want to whet the students’ appetite without promising or straying too much from what you will actually teach them.

For the Tokyo class, I decided to kick things off with a list of stereotypes we usually employ when looking at the city as outsiders. (This point is important – TUJ is an American university, and of my 25 or so students, only two are Japanese, with the rest split between a majority American faction as well as quite a few students from other Asian countries.)

“The city manages to combine the density of Manhattan with the sprawl of Los Angeles – and still thrive.” – Paul Auster
“The world’s most successful megalopolis – home to millions, yet resolutely functional, clean, safe and efficient.” – Gary Snyder
“A collection of villages…” – President Grant (1879, reportedly! And many more statements like this subsequently until today)

I dwell a little on the third point, as we keep coming back to it. Theodore Bestor is among the most vocal critics of this “Tokyo as a village” idea and among the readings for subsequent classes so I introduce his theses from Neighborhood Tokyo for the first time. I also want students to understand what is wrong with Paul Auster’s quote, not factually perhaps, but methodologically, and how we want to go beyond stereotypes and unhelpful analogies in this class.

Another popular way to describe Tokyo is via a list of contrasts, e.g. “old vs. new”, “traditional vs. modern”, “fast vs. slow”, “deep vs. flat”, “ephemeral vs. permanent”. I thought this was a good way to get the students thinking about their preconceptions and whether they can identify subjects or places that fit neatly into these categories, or whether these, too, are misleading and simplifying Tokyo as having to fit on a continuum of such contrasts.

I also warn students to be mindful of any biases they may have when looking at the city, be it their inclination to compare Tokyo to their own urban vocabulary (mainly American) or more widely, to apply Eurocentric standards of urban development to this East Asian city. This will be easier done in a longer lecture (I currently teach in one-hour slots) as it takes a while to convey, best with a couple of examples.

Introductions follow — I usually split the class into small groups to first introduce each other in a more relaxed environment. A thematic question links to the class: “How do you whet someone’s appetite for coming to visit you in Tokyo? What do you better not tell them” and invariably returns mentions of the food culture as well as the unbearable morning commute. Perhaps this can be improved next time around!