A major exhibition on Japanese single family homes is still on for a few days here in Tokyo. I did not manage to see the same show’s version on in London (nor Rome) a few months back, but bought both catalogues to compare. 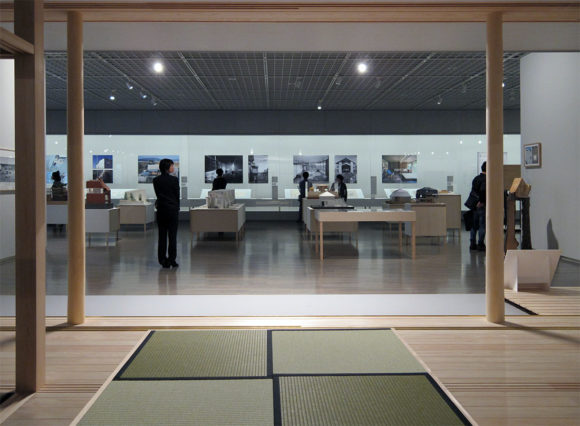 Inside shot from the MOMAT exhibition

If you are to choose between the two, I recommend the Barbican catalogue. The texts flow a lot better here. Without knowing much about the creative process behind the curation of the show(s), it seems that much of the Japanese catalogue’s text is a translation from English, which was then translated back to English.

The creative minds behind the exhibition are Yoshiharu Tsukamoto of Atelier Bow-Wow, Kenjiro Hosaka of the MOMAT and, in the case of the Barbican (and Rome) exhibitions, curators Florence Ostende and Pippo Ciorra. Tsukamoto came up with the idea of applying “genealogy” to house design and Japanese architectural history.

This is genealogy in the Foucault/Nietzsche tradition:

Genealogy is neither traditional history nor metaphysics; according to Foucault, the objective of genealogical history is not to rediscover our roots, but conversely to engage a persistent effort to disperse them.

The result is an exhibition with 13 of these genealogies. They are:

These themes are all great, as they place the home in the context of the changing times but try to understand their meaning and relevance today. The ‘House is a Work of Art’ is perhaps the most beautiful and profound section given the simplicity and depth of Shinohara’s work.

A few unrelated thoughts that I have had while discussing this exhibition with my wife:

In most other parts of the world, the best architects of the postwar period worked on designs for public buildings, or public housing complexes. The “Einfamilienhaus” in Germany, meanwhile, was a symbol of conservatism and of mostly unimaginative designs.

The one-family dwelling has a much more elevated position in Japan’s architectural profession though. The postwar homeowner society, scrap-and-build and a peculiar urban typology and culture help explain why there are so many of them, and why their construction tradition is so dynamic.

Given Japan’s scarcity of land, it has historically been expensive particularly in the cities, which make economical construction methods and space-saving techniques a tradition in and of itself. The economics of homeownership are also very peculiar to this place.

The architecture of the single family dwelling reflects the changing tides of history. The postwar era stood under the banner of coping with the destruction and wide-reaching social transformation. With the 1970s, the decline of the political led to an inward shift toward the individual.

Despite the beauty and inventiveness of the Japanese Home, you can’t shake off the feeling of claustrophobia when walking through some of Tokyo’s residential districts. A lot of people rent extremely small apartments which the skills and social vision of the architectural profession rarely touch.

You sometimes stumble upon designer houses, and yet often the exposed concrete walls have few street-facing windows. The inhabitants seem to turn away from the world, into their own little escape pad in the middle of the city. Of course there are many exceptions.

Meanwhile, every apartment, however small, has a balcony, on which you will be pushed hard to ever see a man hanging up the laundry. The social vision of gender equality as purported in some of the postwar homes has not had a widespread impact on how architecture is being used in everyday life.

Perhaps you can’t do social engineering with single-family homes. All the architects can do is inspire society and reflect on it. And there are many architects here, perhaps more per capita than anywhere else in the world.

Alastair Townsend has written much more knowledgeably on this than I can. If you’re interested, do read his article on ArchDaily; in conjunction with looking at this beautiful exhibition (or its catalogue).