A few weeks ago I discussed the concept of “Tokyo as a slum” and how apt it is to describe living conditions in the postwar period. This is important if we are to glean how useful Tokyo’s experience is to today’s emerging megacities. A more fitting description, I found, may be that of “shared space poverty”. I took a good look at the 1963 Housing Survey for data to support that line of thinking. 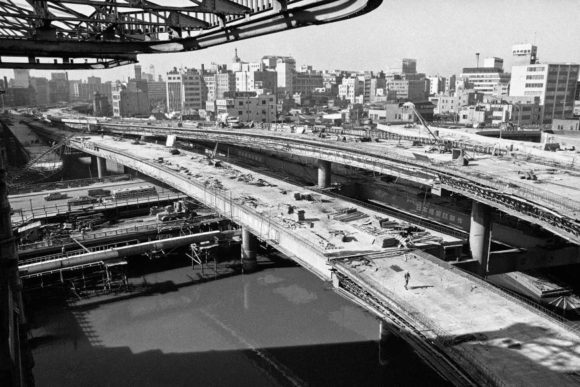 Looking at 1963 may seem a little late down the line, and I am currently tracking down the previous surveys that also include the breakdown for Tokyo’s 23 wards. As long as that proves elusive, however, the early sixties are a good point in time for a snapshot in their very own right.

(Not the least because I want to dedicate a chapter in my forthcoming (!) dissertation to an in-depth description of the city in one particular year.)

As of 1963, anyway, Japan looked back at eighteen years since the end of the war. The Olympics were just around the corner and Tokyo was undergoing its biggest face lift since after the Great Kanto Earthquake.

The postwar economic miracle was in full swing: Prime Minister Ikeda had announced his income-doubling plan a few years earlier. Visitors to Japan began noticing that something out of the ordinary was happening here. Of note is the Economist’s Norman Macrae who came to Tokyo in 1962. Tokyo was still pulling ahead of Japan as a whole, i.e. grow faster not only in absolute but also in relative terms.

But how did the city look and feel at this very stage? My Tumblr gives away some visual clues, museums are full of showa nostalgia, but the quantitative data that I keep collecting helps make this picture a lot more representative across the geography of the city. It is important that we who take an interest in megacities in the developing world better historicise the first Asian megacity.

Alas, much of the data is only presented at the cumulative level of the 23 wards, which is also what I am sharing here today. It nonetheless provides fascinating context for this particular type of time travel!

And now for the data:

The 23 wards were home to just over two million dwellings in 1963, and in them lived just under eight million household members. One in five (18.7%) of the ward-area residents lived in what we call “mixed-use” buildings, i.e. those that combined another function except for dwelling under their roof. These were primarily buildings with an industrial or commercial use; what Matias and Rahul have coined “tool house”.

15% of residents lived in extremely small shared-use rentals, i.e. those in which they shared sanitary facilities with other families. They measured less than six tatami mats in size (nine square meters or 100 square feet) for the entire dwelling.

This type of dwelling usually meant a room along a corridor, sharing the same roof beams with other families in the same building, i.e. very akin if not identical to the prewar nagaya tenement.

More than a quarter of all dwellings (27.7%) gave each of their residents less than 2.5 tatami mats of individual space (4 sqm). Today’s definition of a slum is stricter: It takes three people sharing a space that small for the spatial requirement of a slum to be fulfilled (NB: there are several other dimensions of what constitutes a slum).

This problem of little space was almost entirely a problem of the renting population. More than half of all rental dwellings (51.3%) afforded less than 2.5 tatami mats to each resident, compared to only 10.4% of all owned dwellings.

The 1963 survey still made a distinction between tenement and apartment houses. The former, housing most of the extremely small rental units highlighted above, accounted for more than 10% of the total building stock in the ward area. The remainder was split between detached houses (48.9%) and apartment houses (39.6%).

Although precise figures were not available where I looked, Tokyo’s typology was a lot more low-rise: 35.9% of all dwellings were single-storey buildings. Today it is hard to find them at all.

Tokyo’s building stock was of relatively young age. This was both a function of the destruction wrought upon the city during the war as well as its exceptionally fast growth during the postwar period. Only one in five (20.0%) of all dwellings dated to before 1942. 44.0% of the housing stock was built in the 1950s, and 17.3% in the three years from 1960.

How about the quality of housing? About one in five dwellings (18.8%) needed some form of repair. 3.4% were in great need of repair or dilapidated. The older the housing stock, the more repairs were needed. Almost half of the prewar and wartime dwellings (44.4%) were in some need of repair.

Lastly, a few words on the facilities residents had access to in their dwellings. 11.3% of all dwellings shared their sink with another household. 27.9% shared their toilet. (As an aside, I still remember my grandparents living in a building with a shared toilet as of the 1980s. Berlin still had a fair share of apartment buildings with this setting in the 1990s, so while the Tokyo figure may seem high, it needs to be put into context.)

Only about a third (34.4%) of all dwellings had a flush toilet, and were thus connected to the main sewerage network. About the same proportion (33.6%) had their own bathtub. This means that that two thirds of Tokyo dwellings had no flush toilet and were most likely to go to communal baths regularly.

Much of the work yesterday was spent on the latter pages of the survey in which the data is broken down by ward. This will hopefully form part of my main thrust of work, i.e. finding trends in the distribution of certain indicators across the wards. Did breakneck economic growth and urban development lead to spatial dislocations?

If Tokyo was in fact “egalitarian”, could that have had something to do with the (economic and urban) success story of the postwar period?

Was Tokyo a slum? Certain areas would perhaps evoke certain associations with today’s slums, but for that analysis to bear out we would have to split much of the data into smaller units. For the total ward area, it is hard to infer more than that a surprisingly large part of the (rental) population was still suffering from fairly dismal housing conditions as of 1963.