A very brief stopover, owing to the flight routing but also a long-held dream, was Qatar. Here, we stayed overnight, and had the chance to visit the marvelous Museum of Islamic Art and reflect a little on this part of the world, at this very point in time. 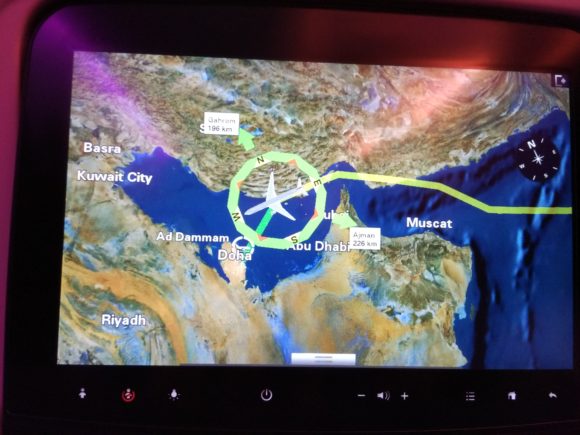 Due to the ongoing blockade, the flight route of our brand new A350 Qatar Airways from Singapore carefully took us around the UAE. This direction does not see nowhere near as much disruption as flights to Africa. I heard that the three-hour trip to Khartoum in Sudan now takes six.

In Qatar, there was nothing but defiance in the air. Literally on the airwaves, with Al Jazeera (English) blasting updates and calls for press freedom. In the streets, people were tagging walls with their messages. Taxi drivers were unflinching in their support of the young emir. His image is ubiquitous: a Qatari artist has created a “viral” sketch that is now seen on countless cars and buildings. 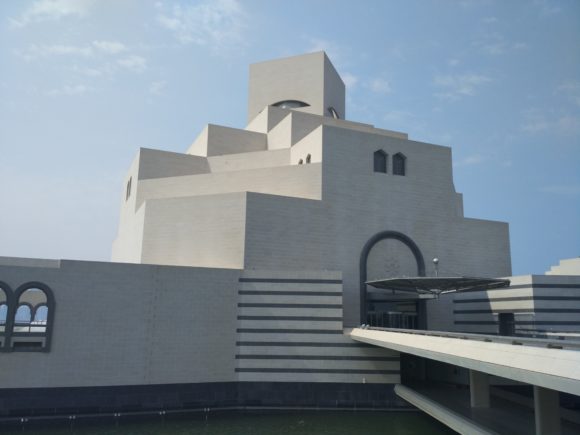 But first, and directly from the airport, we went to the museum. I had no time to visit it last time I came to Qatar more than five years ago but always had itchy fingers when flights with Qatar showed up. Now from Singapore, the Middle Eastern detour made geographic and financial sense, so there we went! The approach to the building leads via a long driveway. In this weather, however, it is a bit tedious to walk and a taxi can drop you off on the side.

The building is amazing as widely reported. The geometric take on traditional Islamic architecture, most notably the Ibn Tulum Mosque in Cairo, works beautifully, with sunlight and shade alternating on the large cubical sandstone blocks that make the structure.

Inside, the space is surprisingly open, towards the dome as well as the sea on the far end. The exhibits are – from what little I can gather – “state of the art”, and present geographical (3rd floor) and thematic (2nd floor) overviews of the history of Islamic art. Islam not being an iconoclastic religion makes religious (and secular) art from these parts of the world much more aesthetic than contemporaneous Christian works (yes, in my opinion).

The Central Asian exhibits reminded me of my trips on the former Silk Road, especially to Uzbekistan. The blue domes of Buhkara and Samarkand are best enjoyed in situ, but an air conditioned, darkened room in the MIA is probably a good second best choice.

Back to Qatar, the image the mini state is trying to convey to the world is doubtless one of sophistication. Yes there are obscene amounts of gas-related wealth, but the rulers are wise enough to spend it on culture, starchitects, and a more modern take on foreign policy. The Saudis are sitting in their own glass house throwing stones, accusing the Qataris next door of funding radical Islam.

While some of this is undoubtedly true (me never having been in Saudi, and only very briefly in the neighbouring UAE), money also buys you the spin. The AJ reporters responding to calls to shut their station by citing press freedom do not seem overly inconvenienced by Qatar’s very own record on democracy. (Although to be fair, AJ does occasionally report on Qatar’s track record on human rights.) 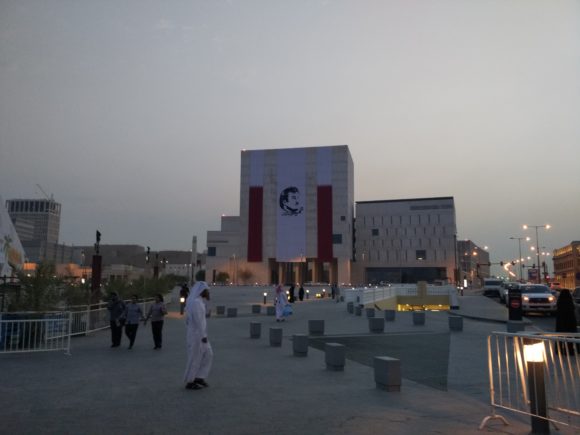 And still, taking sides in this conflict may not mean choosing principles but favoring one clan over another. At the end of the day, the countries have the same regressive political and economic systems. Family dynasties see the nation’s wealth as identical with their own.

Qatar’s citizenry of 200,000 is complemented by almost ten times as many labor migrants. In 2030, estimates run that the total population will reach almost 4 million. The standard of life of Qatari citizens is bought by paying many of these migrants a pittance, but that still compares favorably to what they get at home, in India, Pakistan, Bangladesh, Nepal…

But it is more than just low-skilled cheap labor: I remember seeing exactly one Qatari during my meetings with senior officials from several top enterprises back then – and these were not middle office staff, they included CFOs, chief investor relations officers, etc.

In an effort to keep the top-positioned expats in the country, Qatar has begun talking about a new status of long-term residence which the Gulf press has predictably already torn apart. It will be interesting to see how deep (or expensive) the loyalties of such professionals are. My guess is that the money will be convincing enough. Meanwhile, the armies of lowly-paid South Asians will have little choice but to serve on this hot and arid island come what may.