I re-read Matias’s and Rahul’s article on “When Tokyo Was A Slum” on Next City. It makes a good qualitative case as to why the city’s incremental, unplanned growth post-WWII may hold lessons for today’s developing cities. I looked for some quantitative substantiation of their claim that indeed Tokyo was a slum. Here is what I dug up. 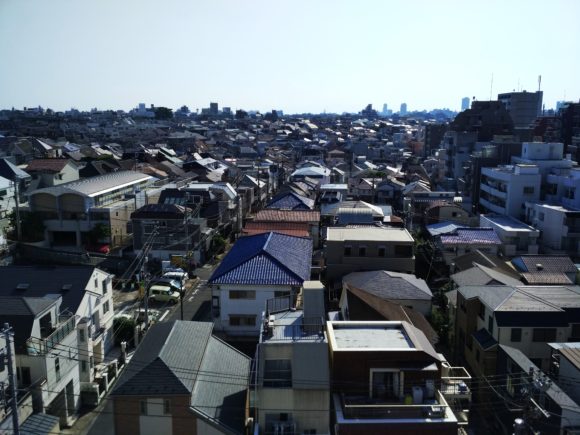 First off, let’s start with an observation from the time in question. In her 2004 book, Laura Hein quotes Ouchi Hyoe writing in Sekai magazine, in 1959. His piece is called “The Tokyo I love” and in it, he laments the dismal state of the city’s development, almost 15 years after the end of WWII.

Despite the fact that the city had long achieved prewar peaks in terms of overall economic output, the standard of living was still only 50% of prewar levels. Basic amenities were in short supply and postwar apartments were small and expensive.

Nearly half of all Tokyoites (42%) lived on less than 2.5 tatami mats, i.e. 4 square meters. School buildings were inadequate and dangerous, commutes long and arduous. Almost two million inhabitants were classified as poor, with half of them living on less than 300 yen per month. (Note to self: where is this information from?)

But was Tokyo a slum? UN Habitat lists the following criteria for a slum (NB: only one needs to be present for an area to be called a slum):

In Tokyo’s case, it is hard to retroactively calculate the proportion of the population whose dwellings qualify under the above, especially for the first point. Jordan Sand and I have been looking at some historical substandard housing surveys. The proportion of Tokyo’s population living in these slums did not exceed 2%. A separate post or two on this subject will undoubtedly follow.

As regards (in-)sufficient living space, the 1960 census does not have data at the level of granularity needed to say whether more than three people shared a room of less than 4 sqm. But what we can deduct from the 1960 census is that 1.8% of Tokyo’s population (this is the prefecture) lived on less than 1 tatami mat, which would be fairly close to 2.5 mats divided by maximum three people. This is also a lot closer to the substandard housing population figure above.

Nonetheless, 2.5 mats per person is very, very small, and the fact that 39.8% in 1960 lived on less than that really drives home the concept of “shared poverty of personal living space”. But the 1960s were a decade of not just material catch-up but also of overall improving living conditions. In 1970, only 14.4% of Tokyo’s population lived on less than 2.5 mats per person, a remarkable reduction within the space of one decade.

So if there was a problem with slums in 1960 Tokyo, the situation had materially improved ten years later, although local differences between the wards were relatively marked: Arakawa shows the highest percentage of population living on less than 2.5 mats per person (22.5%), Chiyoda the lowest (8.0%).

The third and fourth slum criteria are interesting and had me look up some statistics on water and sewage systems. By 1957, several wards were not yet connected to the municipal waterworks. Ota, Setagaya and others had zero meters of sewage pipes and no cesspools. There were no households with flush toilets in these wards either. The growth in stopcocks since the end of the war had also just kept up with population growth. In short, Tokyo’s waterworks were inadequate.

Were they characteristic of a slum though? I am no expert in water infrastructure and cannot really compare the figures I read with today’s developing cities. After a (layman’s) visit to the Tokyo Historical Waterworks Museum in Ochanomizu, however, I would say that Tokyo’s traditional water infrastructure down to the nagaya level was actually relatively efficient, including the disposal of wastewater and night soil (check these two photos on the postwarjapan Tumblr for how this looked).

The water provision also improved steadily throughout the 1960s. In 1957, only 16.4% of households in the 23 special wards had flush toilets. By 1970, this had increased to 49.7%. I would thus say that the inadequate water supply was a temporary phenomenon related to the growing pains of Asia’s first megacity.

Summing up, I think that describing large parts of postwar Tokyo as a slum is not entirely accurate. There were certainly pockets of official “substandard housing” (covering less than a percent of built up area, and comprising less than two percent of the population) that were by all means equivalent to modern-day slums (more on that in a later post).

However, large parts of the city were poor in a more or less egalitarian manner, there was “shared space poverty”, which was somewhere above today’s criteria for slums.

One thought on “Tokyo as a slum”