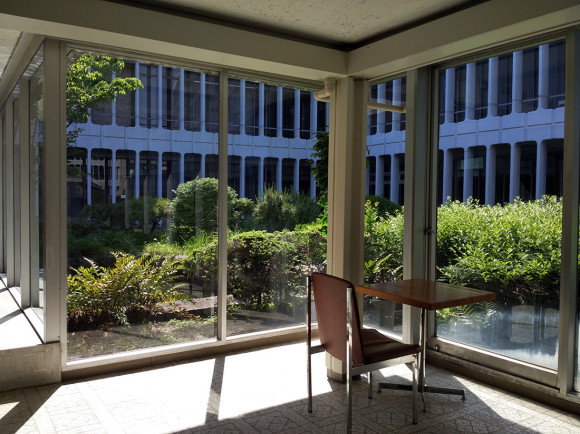 We received a very informative handout from the museum staff, and most of the information below is taken from there. Amidst the heat, I forgot to take a panoramic shot from the outside, but plenty of those can be found online. This model here provides a great overview of the complex. 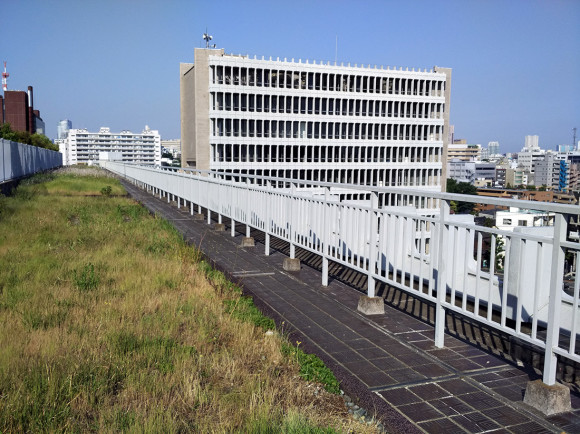 Togo Murano was one of 20th-century Japan’s most prolific architects. Given his long and varied career, it is hard to classify his work as belonging to one particular style. He was also very sensitive to his clients’ briefs. Thus it was not unusual for him to build a Kabuki Theatre in a very traditional design in the late 1950s, while his 1936 SOGO department store in Osaka is one of the most striking prewar modern buildings. Much more on the architectural legacy of Togo Murano is accessible via this great blog post by Graham McKay.

Murano was modest and not interested in international fame, which also explains his relative obscurity outside Japan. The guides who led us through the buildings were without exception Murano fans, so he certainly has a following here! 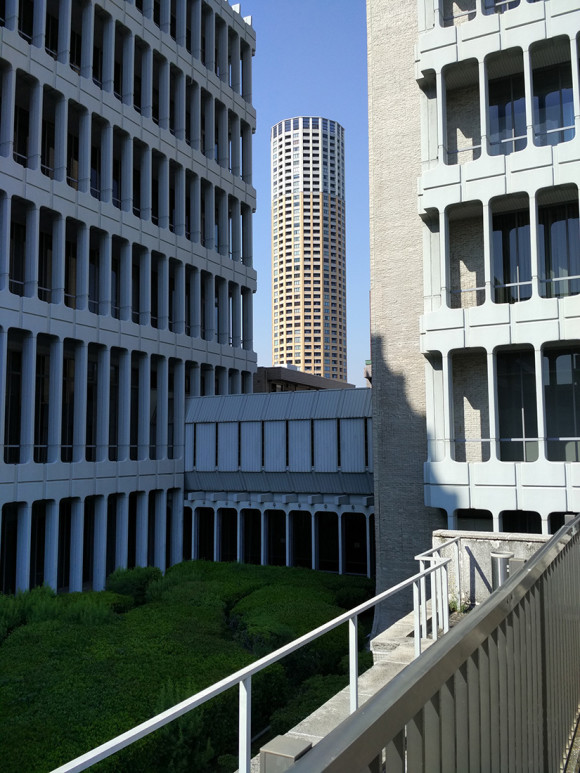 The Chiyoda Life Insurance Co. building in Meguro was completed in June 1966. Murano did not want the building to overly reflect the light via its windows or a shiny metal facade. That’s why he sprinkled sawdust in the mold of the aluminum louvers, which dominate the main buildings’ facades and lend them their unique character. 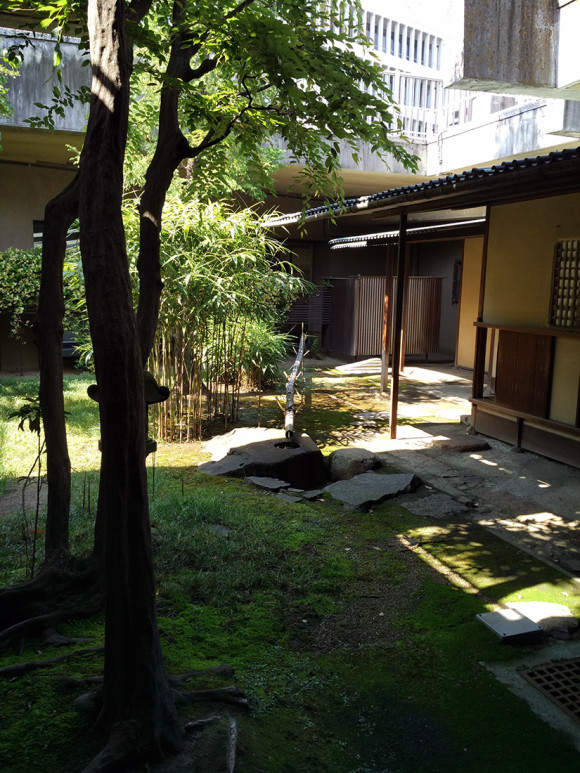 The main attraction are the Japanese rooms on the ground floor, which were conceived for the employees of the insurance company and are partially open to the public today. They are a peaceful island tucked under the reinforced concrete of the plaza, the opening letting light flood the teahouse’s exterior.

The approach to the building via the south entrance lands you in front of representative eaves, supported by asymmetrical aluminum pillars, that — in typical Murano style — extend in diameter towards the floor. 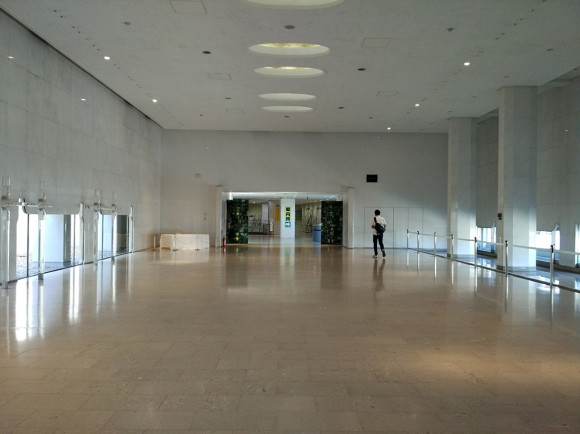 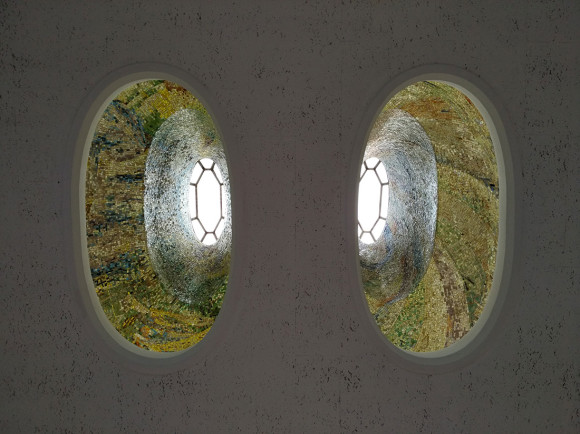 You then find yourself in a large entrance hall. Eight skylights, beautifully decorated with mosaic patterns inside, let in light, which reflects beautifully on the marble floor. A shallow water pool on the right contributes to the serene atmosphere. 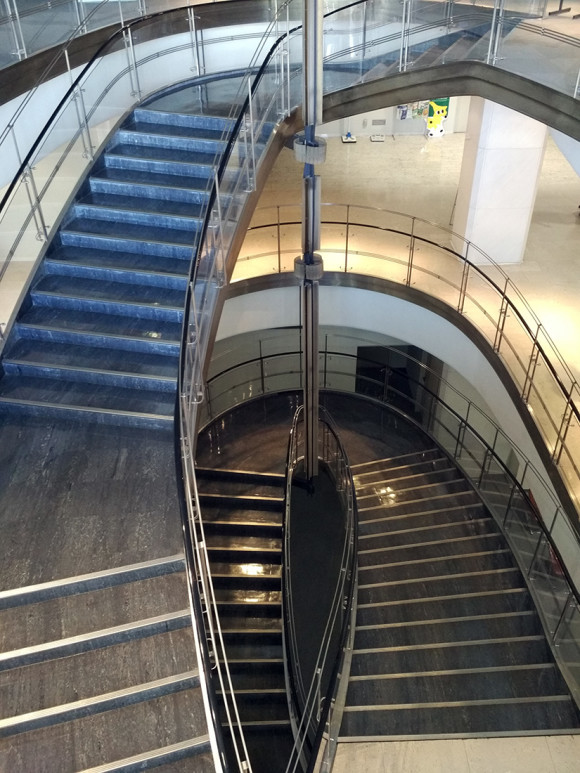 Further on is the staircase. Apparently Murano was famous for his elaborate staircase designs. This one is no exception. It lends the building an air of playfulness and counteracts the rather austere facade design.

Towards the end of the tour we were taken up on to the rooftop. It is always a great pleasure to see the city from above. Back in 1966, Meguro was a lot more suburban in character. 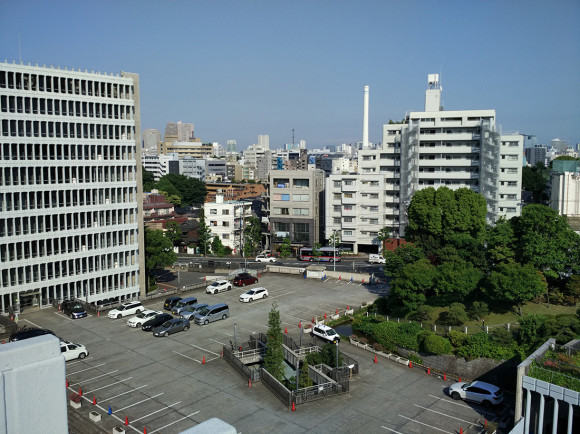 You can see the green opening in the plaza (today a parking lot), this is where the Japanese style rooms are located. According to our guide, they were also built in order to alleviate staff complaints that the area was boring in comparison to central Chiyoda, where the company was headquartered before. 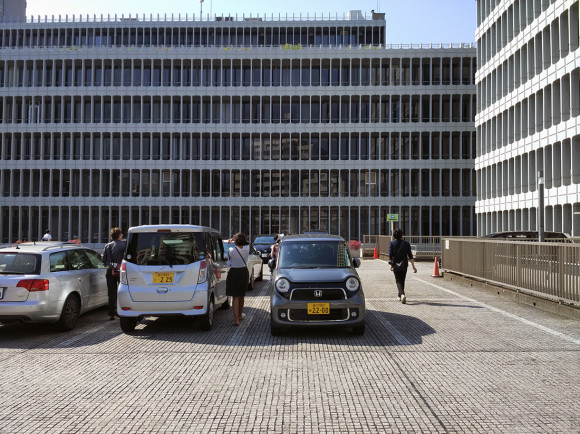