This 1970 building is also known as Sky Building No. 3 and (much more fittingly) the Battleship Building. Situated on a main road in Tokyo’s Shinjuku district, it is a colossal work by the eccentric late Yoji Watanabe who used to serve as a naval officer during WWII. This 14-story building has defied the fate of many other buildings from the 1970s, that is it got a complete makeover and avoided destruction. 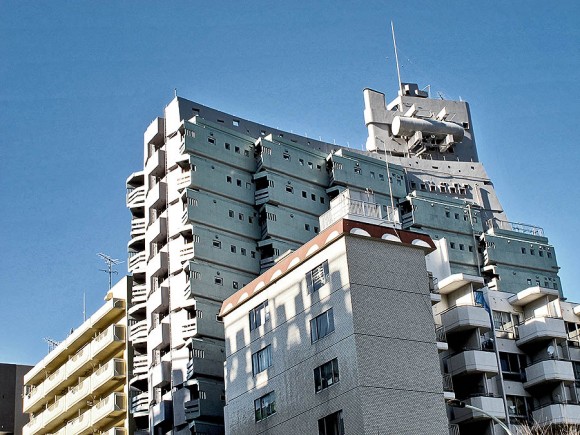 Ulf Meyer’s great architecture guide to Tokyo lists some information about the building (he actually lived in the house some years back): The tower consists of 150 prefabricated capsules made of 2.3-mm sheet metal (i.e. Watanabe built without using asbestos). The capsules are offset and thus each face south to ensure good lighting. Watanabe said:

In order to keep up with industrialisation and mass production, contemporary architecture needs to compete with modern shipbuilding, aircraft and train design, and the design of spacecraft and Antarctic stations. Then our buildings will no longer resemble traditional buildings.

A fantastic article on Japanese English language magazine Metropolis written by Richard Dreux is probably the best piece of information out there about the fascinating Watanabe and his life (in English, that is).

Inevitably, Sky Building No. 3 invites comparisons with the Metabolists (especially if you see how the steel units got assembled – NB: the same site has some additional great photos) but Watanabe did not want to be associated with them. He regarded their theory as largely academic. In fact, he regarded academia as an unnecessary bureaucratisation of architecture.

He is still most famous for his many competition entries, including for the Japanese Supreme Court.

Judges anticipated Watanabe’s audacious entries and sought them out as soon as they convened. The outcome was predictable: he accumulated prizes, but never won outright. Committees award top honors by consensus, and Watanabe’s work was provocative, never mollifying.

Some of his other buildings already fell victim to build-and-scrap, but it is somewhat ironic that his Sky Building No. 3 will most probably outlive the Nagakin Capsule Tower (built two years later in 1972), the Modernists’ iconic building in Ginza designed by Kurokawa. It is very likely going to get torn down soon, despite UNESCO calls to make it a heritage site.

The Sky Building, on the other hand, recently got completely renovated. Its flashy website is forthcoming about the fact that the building is an architectural monument and makes it part of its sales pitch to a young and creative crowd (with some money at its disposal, though, as the cheapest one-bed unit comes at 800 EUR per month). Preservation and profit are not necessarily contradictions in Tokyo’s ever-changing cityscape.

The building is and was popular with people around the world and regularly features on the list of urban explorers, e.g. Frédéric Gautron. Another, Jordy Meow, even got invited to a rooftop party organised by some of the inhabitants a few years ago. The uniquely dilapidated charme the place oozed back then (check out the interior shots here), however, is now gone that restoration has taken place.

Residential units start from the 10th floor, probably because the lower floors do not receive much light due to the buildings next door (they weren’t there when the place got built…). Tenants share the “social” 9th floor with a lounge, cinema and play room. The lower floors are reserved for office space. 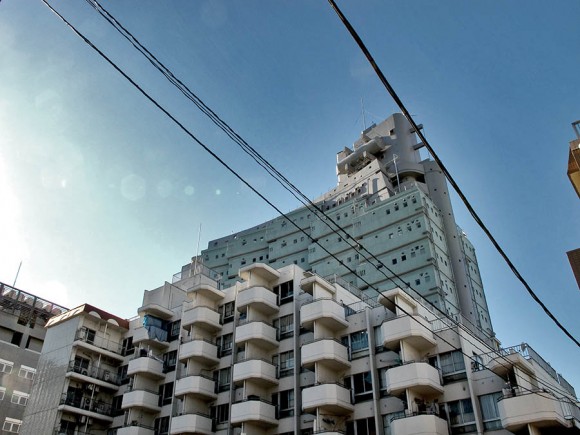