I want to use this blog as a notepad for the most important papers that I come across during my PhD work. One of them looks at the causal relationships between urbanization and economic growth. 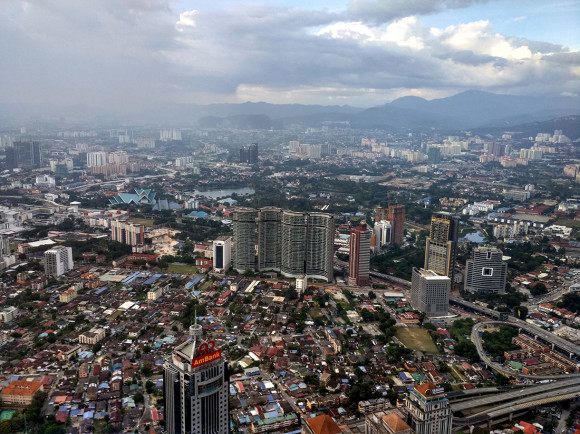 Kuala Lumpur from above

Their categorization is useful in that it provides a summary of economic theories of urbanization as well as a framework with which to understand distinct phenomena that are often happening simultaneously but may be unrelated. Without further ado, I am going to briefly summarize the main theories they cite. A review of a literature review, so to speak. Terrific.

“Urbanization with growth” is the classical Industrial Revolution story, i.e. the consequence of an agricultural revolution that leads to an increase in food productivity and “releases” agricultural workers to the modern urban sector.

While this explanation focuses on “push” factors that drive a growing proportion of the population towards cities, “pull” factors are also important. They were first popularized by Lewis’s 1954 classical two-sector model describing an urban industrial revolution.

Here, a backward agricultural sector employs “unlimited supplies” of unskilled labour with zero marginal productivity. You can thus remove workers from the countryside without jeopardizing total agricultural output. Meanwhile, a modern urban industrial sector is emerging in the cities. It only needs to pay these masses of laborers agricultural subsistence wages plus an urban premium, as labour remains abundant for a long period of time. This steady supply of cheap labour is one of the main structural advantages of developing countries.

A third subset of “urbanization with growth” theories relates to resource revenue windfalls making cities grow. As opposed to agricultural and industrial revolutions described above, resource revolutions may not have the same long-term effects and create “consumption cities” where the workforce is concentrated in non-tradable sectors. The two authors wrote another paper together with Gollin (2016, link) describing this phenomenon.

Finally, of course urbanization on its own can drive economic growth. Most of these distinct theories derive from urban economics and describe agglomeration effects (e.g. Glaeser 2011, see my post here):

Higher population densities lower transportation costs and facilitate the distribution of goods. Firms and their customers are closer to one another, allowing for more frequent transactions at lower cost. Cities have “thick” labour markets (Jedwab and Vollrath 2015: 15), partially also due to the availability of human capital enhancing institutions such as universities. Such universities, hospitals and many other institutions enjoy economies of scale in providing their services. Important, too, is the proximity of firms operating along the same supply chain. These can more easily form industrial clusters if they are located close to one another.

According to the authors, theories of urbanization with growth capture the experience of European (and neo-European) countries reasonably well until about the 1950s, as well as urbanization processes in Latin America somewhat later in the 20th century. The authors state that “more recently, agricultural and industrial revolutions have diffused to East Asia, and to a lesser extent, South-East Asia” (ibid: 16).

Theories of “urbanization without growth” explain why cities can grow even in the absence of the productivity improvements described above.

Urban technologies help explain why megacities in today’s developing world can increasingly shake off the correlation between urbanization rates and per capita income (ibid: 17) that appeared to hold in earlier phases of primarily Western industrialization.

Furthermore, hedonic pricing models suggest that people value urban amenities, e.g. theaters, restaurants, access to better education, etc. and are willing to pay a premium for that, by accepting a lower net income.

First, “urban bias” (coined by Lipton 1977 and Bates 1981) refers to situations in which political processes favor urban dwellers over rural populations. Ruling elites seek the support of those physically close to the urban centers of power and placate the population with setting artificially low food prices, providing manufacturing employment, etc., largely to the detriment of the rural population. In seeking to maximize their net income, it therefore makes sense for people to locate in cities.

Second, rural poverty is another major “push” factor driving people into the cities, as are land pressures or man-made or natural disasters.

Finally, a major and often overlooked source of rising urbanization relates to internal urban growth (Jedwab and Vollrath 2015: 18). This is contrary to the widespread belief and theoretical supposition that most urban growth is a function of rural-urban migration.

Before I finish, herewith a long-term view of global urbanization: In 2010, 17 of the world’s 30 most populous cities (56.7%) were situated in Asia. While this roughly corresponds to Asia’s share of the global population (59.6%), it represents a drastic increase from 1950, when there were only seven Asian cities in the top 30 (23.3%), although more than 60% of the global population lived on the continent.

This trend shows no sign of abating. The UN expects a full 20 out of the top 30 global cities to be Asian by 2030. Looking back in time, it becomes clear that this merely marks a reversal from the pre-industrial period, when, for example in 1700, 17 of the top 30 cities were Asian.

My work aims to contribute to the historical narrative of this postwar transformation, i.e. of Asia reclaiming a proportionate representation in this particular ranking.

In doing so, I hope to show that theories of urbanization and economic development, helpfully categorized by Jedwab and Vollrath, do not fully capture the experience of many Asian cities. Here, labour-intensive industrialization and distinct urban traditions caused urbanization to proceed alongside different paths from those charted in the West, necessitating alternative frameworks of analysis.