Some reading notes from a recent urban studies classic as well as thoughts on density (again!) and environmental sustainability below the jump! 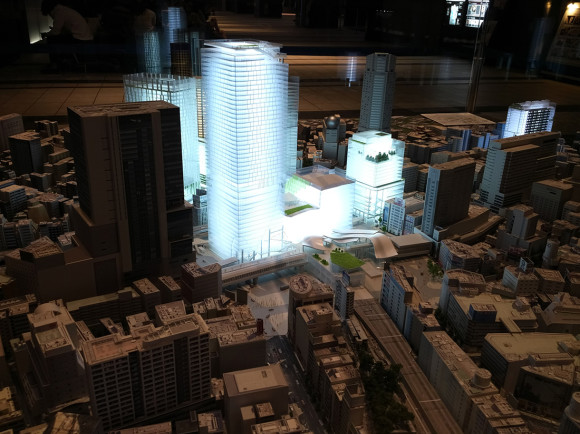 The prompt for this post is Edward Glaeser’s 2011 Triumph of the City, which I read over the last couple of weeks. In the book the Harvard economist makes an enthusiastic case for “humanity’s greatest invention”. Glaeser is one of the pioneers of urban economics, so the book is a great primer of the discipline’s main concepts. Why do certain cities fail while others thrive? What is good about proximity and density?

One of the three main sticking points, as identified by the Economist article linked above, is Glaeser’s assertions that cities do not make its inhabitants poor, but that they attract the poor. This is particularly evident in the developing world. However, it is still better to be poor in the city than to be poor in the countryside, for which Glaeser quotes clean water access rates in Lagos compared to rural Nigeria.

Without looking left and right for undoubtedly rich academic research on this topic, I think that this point is not overly contentious. It is however, so generic a statement, that it hardly helps us understand the realities in different developing cities facing different challenges. Very often, poor urban policies worsen poverty or make it much more structural. Also, much of the population increase in large developing cities is no longer due to migration but also internal growth. And while fertility rates are generally lower in cities than in the countryside, this does not hold when we look at the poorest slum areas. So, yes, poverty is often much worse in the countryside, explaining the enduring “push” factor rural poverty has on urbanization rates. At the same time, cities are not the huge opportunity machines we often make them out to be.

Another sticking point is Glaeser’s assertion that density is good, and high-rises are the epitome of such density. In this, he contradicts his idol Jane Jacobs, who held that low-rise neighborhoods and their lively street life are the key ingredients of a successful city. For Glaeser, density is the only viable option to accommodate growing number of people in environmentally sustainable ways. After all, transport costs are infinitely lower if we all live and work in close proximity.

The third, and related, assertion is that sprawl is one of the gravest threats. Suburban lifestyles demand long car journeys and allow bigger, more expensive houses that are heated and cooled depending on the season. Suburbs, although green when viewed from above, should actually be considered as very brown, i.e. environmentally harmful.

The latter two points have led to attacks on Glaeser from several angles. Although he has moved to the suburbs himself some time ago, these critics stem disproportionately from a vocal group of conservatives who think of Glaeser as part of an “already established urban elite” (or an urban yuppie who has it all wrong). They probably all own urban real estate so in preaching density, all they do is talk shop.

Book titles such as Urbanism for the Rest of Us suggest that the average gas-guzzling suburban American should feel attacked by urban proponents such as Glaeser. America’s increasingly squeezed middle class cannot afford a life in the city centers with the same comforts that the suburbs offer.

Glaeser admits as much. After all, Atlanta and Houston are among the most sprawling metropolises in the States but have seen the fastest recent population growth. A big reason for that is that cities such as New York and San Francisco have not built nearly as much as they should have given the demand for living space in them. The solution? Make it easier to gain building permits. Fight NIMBYism. Stop subsidizing fuel and highways.

Anyway, I don’t need to go over the arguments presented in the book, it’s well worth the read. This is just to say that the defenders of the status quo — often employed by conservative think tanks with backing from fossil fuel companies — overlook the externalities of our suburban living, which rely crucially on affordable energy. Our quality of life is indeed threatened if we are not charging additional levies on CO2 emissions. Wendell Cox, a person I have linked to before, thinks the opposite. His book’s name: War on the Dream: How Anti-Sprawl Policy Threatens the Quality of Life.

To take a step back, one major problem with these debates is that very often the terms city, urban agglomeration, dense areas etc. are used interchangeably so that we often end up comparing apples with oranges. Comparing density figures of different jurisdictions is notoriously difficult. Where does one draw the line for Tokyo? Its 23 wards? The wider metropolitan region? And, while overall very high, Mumbai’s density is very heterogenous so there is not really one representative urban form to speak of.

I attended an interesting seminar on economic history in Cambridge recently. Among the topics was a discussion of the history of energy by Professor Paul Warde. Does the energy intensity of GDP present itself as a bell shape, with declining energy intensities once a certain level of wealth is reached (and when the energy-intensive production of manufactured goods is outsourced to other parts of the world)?

This question will have major ramifications for our future, for which we hope that developing countries find less energy-intensive paths to prosperity than those the West has charted. The key battleground of this discussion will be in cities, the locus of much of the world’s population and economic activity. Put differently, it is crucial how cities can grow without proportionately increasing their energy demand.

A great paper by Creutzig et al puts some meat on the bone of how much energy cities actually use and whether there is some kind of typology emerging. David Thorpe has helpfully summed up the main insights from the research here. Here is the main chart of their three-way regression: 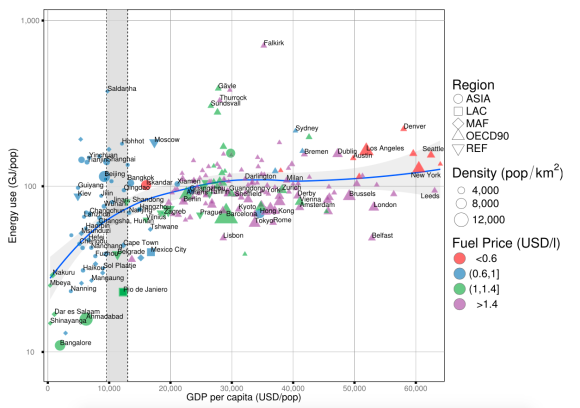 Cheap energy appears to lead to higher per capita emissions. If cities in poor countries want to save energy in the future, their best bet is to invest in public transport rather than locking in highly-polluting car-centric models of transportation. Above all, increased economic activity leads to higher per capita energy use. If we are to avoid catastrophic increases in temperature, something will have to give.

To return to Glaeser’s book, a few noteworthy points to finish this post:

He talks about Shanghai and Beijing not being very dense places (p. 217). This is something I want to turn my attention to on this blog shortly. I still have a long post on my October trip in draft status — but one of the topics I found fascinating was to do with urban expansion and its impact on density figures.

He also writes about Tokyo’s success story (p. 225 ff.). The primary reason for the city’s performance lay in its 1960s skill level. With 7.4 years of average schooling, it had a major advantage over cities in a similar economic position today. Moreover, Tokyo is the capital of a highly centralized bureaucracy, which led to firms clustering here above all other places in Japan.

On page 226 Glaeser says that Tokyo’s size is very manageable and can therefore act as a model for other Asian cities. Somewhat counterintuitively, he also says that Japan’s bureaucrats “wisely allowed Tokyo to grow tall” (p. 226), helped by a superb transport system. The cursory and rather superficial treatment of Tokyo lets one wonder how deeply research and water-proof the other cases are. However, I would trust Glaeser much more on the U.S. where most of his academic work has been based.

Glaeser says that in the future, we will tend to regard suburban living as an aberration rather than the norm. Ideas spread much more easily in dense environments. Our better future therefore is an urban future.