With two maps in tow, I look at Tokyo’s land use and zoning in the late 1950s. Zoning designations largely reflected then-current land uses, except for some visionary (and eventually never realized) ideas about greenbelts and decongestion. 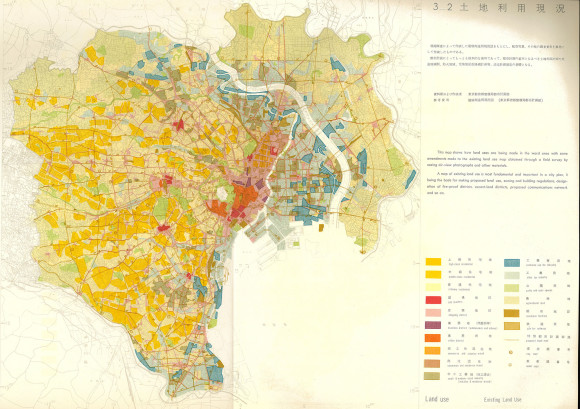 I have written on zoning in Tokyo on this blog before, when discussing a post on Tyler Cowen’s Marginal Revolution blog. To my mind, it painted some rather dubious connections between the current zoning regime and an alleged success of the Japanese housing market in delivering a healthy number of housing starts.

I subsequently discussed some of these issues (briefly via Twitter) with the FT’s Robin Harding. I will hopefully have a chance in the future to look at house prices and real estate economics in more general terms again.

Today I go back in time, to around 1960. This is a time when Tokyo is in a state of flux, expanding its footprint and seeing its industrial structure change in the Japanese economic miracle.

The first map (above, click for higher resolution) shows the existing land use. For now keep in mind that these uses are by no means exclusive but designate the dominant land use in a given area. There are also shaded areas in which no land use is dominant.

Chiyoda and its vicinity are dominated by a core of commercial land, surrounded by shopping areas in places such as Ginza and Nihonbashi, among others. There are “gay quarters”, i.e. entertainment districts, also in Ginza, and particularly surrounding the major train stations in the West, Shibuya, Shinjuku and Ikebukuro, as well as the traditional centers in Asakusa and Ueno.

Interestingly, residential land is subdivided by “class”, i.e. ordinary, middle-class and high-class, the latter concentrated primarily west of the Yamanote line. There is still quite some agricultural land within the area of the 23 wards, e.g. in Adachi, Itabashi, Nerima, Suginami and Setagaya. It will all but disappear in due course.

What is telling is that the some of the most densely populated areas of Tokyo are actually not on “residential land”, but are either located within the industrial clusters along and between the Arakawa and Sumida rivers or in the commercial districts of the traditional shitamachi / downtown area.

Small and medium sized industry and residence mixed, perhaps the quintessential Tokyo small urban workshop typology, is centered in the areas beyond the Sumida river, i.e. Sumida and Koto wards, and in the south in Ota. What I found surprising is the concentration of this land use in Meguro and Shinagawa wards. 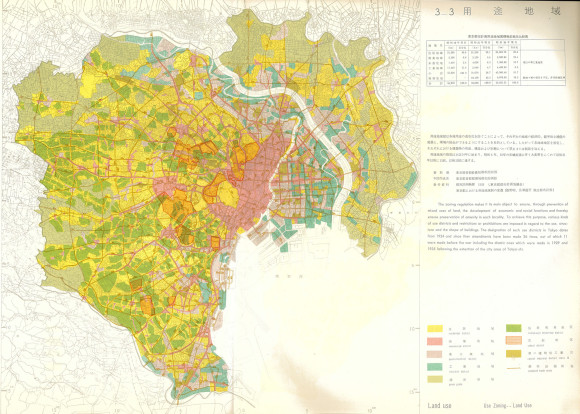 The second map shows the zoning designations, i.e. which purposes are permitted by authorities in certain areas. Perhaps the most interesting way to look at this is to find significant differences to the actual land use shown in the first map.

We can see that quite a large proportion of West Tokyo is designated either as exclusively residential or part of a “green girdle”. In the late 1950s and early 1960s the conviction still existed that the city’s urban growth could and should be kept in check by measures such as a green belt, satellite cities, etc. For more details, this short paper has some more information.

As regards the exclusively residential parts, they overlap with the “high-class residential” land use designation from the first map. Another difference is the seeming desire to “de-industrialise” the SME industry and residential mixed area in Meguro and Shinagawa referred to above. There are also “school districts”, mainly around major universities that probably came with certain restrictions and allowances at the time.

The text on the map’s right gives us some idea of the prevalent thinking at the time:

The zoning regulation makes it its main object to ensure, through prevention of mixed uses of land, the development of economic and social functions and thereby ensure preservation of amenity in each locality. To this purpose, various kinds of use districts and restrictions or prohibitions are imposed in regard to use, structure and shape of buildings.

Mixed use is considered as something negative. The overcrowded central districts whose smokestacks had not only brought economic growth via urban manufacturing but also smog and environmental degradation were understandably the main inspiration behind this thinking.

The late 1960s would see legislation passed which pushed these “dirty” industries towards the newly-reclaimed land in the bay or out of Tokyo altogether. However, Tokyo retained much of its mixed-use character throughout the ensuing decades.

One reason for this, and something this early zoning map shows too, is that the Japanese system does with relatively few categories. To this day, its 12 zones are a far cry from what are usually much more in a Western context. Given the diversity of urban landscapes and appearances, these zones logically need to be encompassing of other uses.

In many ways, too, the 1960 zoning map above is also rather up to date.

Parents of friends here in Tokyo are currently building a new house, so I looked up their area’s zoning restrictions on the Shinagawa-ku website. Their area is considered “quasi-industrial”, which means that:

“This zone is mainly occupied by light industrial facilities and service facilities. Almost all types of factories are permitted excepting those which are considered to considerably worsen the environment.”

Importantly, this zone’s use does not preclude it from being used for residential purposes, and the area does not look markedly different from those being exclusively designated for living, except perhaps for the occasional workshop and garage.

Setagaya-ku’s zoning map is here, and its residential character is firmly inscribed in its zoning ordnances. Sumida-ku, on the other hand, retains much of the zoning characteristics from earlier, i.e. is mainly comprised of quasi-industrial, industrial, commercial or maximum-allowance residential zones.

Before I move on to a post on the history of zoning in Japan (hopefully replete with a discussion of Andre Sorensen’s great The Making of Urban Japan), suffice it to say that Japan’s zoning regime seemingly did quite well at “confirming” existing land uses and to separate heavy industry from residential land.

Thus, its relatively simple classifications were initially a way to shield heavy industry from the complaints of residents, and later also to push out polluting industries from inner-city areas.

At the same time, and as long as they were not overly polluting, small and medium size enterprises were protected in their inner-city existence by the relatively broad designation of “quasi-industrial” zones, e.g. in my friend’s neighborhood in Shinagawa-ku.

Lastly, residential use in non-residential zones was widely permitted except for in heavy industrial areas, which allowed inhabitants to live near where they work and vice versa.

The major difference between the 1961 map and the zoning plans of today is that the fringes of Tokyo’s 23 wards could not retain a lower density than the core or even could become full blown greenbelts.

Suburban typologies have been pushed out much further than here given the Tokyo’s continuous growth over the ensuing decade.