Rather than dumping a whole 8,000-word essay on this blog, I thought that it makes more sense to fast forward straight to the conclusion. Please read below the jump what I found out about the impact the Allied Occupation of Japan between 1945 and 1952 had on Tokyo’s urban development. I may chop up the main body of the text and post it on the blog in segments if there is any interest. Just drop me a line! 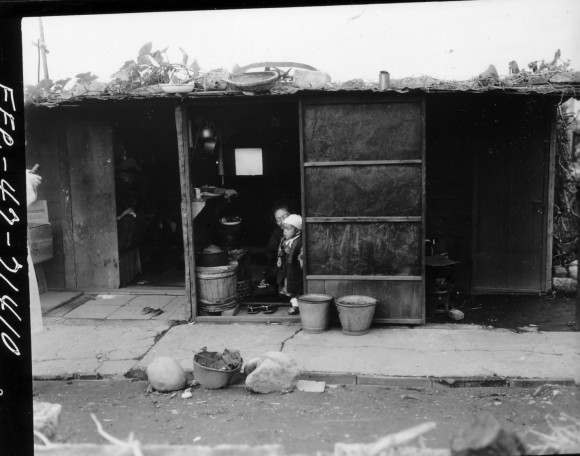 This paper has attempted to shed some light on the Occupation period and the ways in which the Allied presence and their policies shaped Tokyo’s urban fabric. The threefold division into the spatial, institutional and subtle channels along which this occurred could not avoid certain overlaps between them. This is perhaps also true of the timeframe under scrutiny. The highly fluid 1945-1952 period may be subdivided into several chapters, and yet also needs to be seen as continuous with the prewar years. Moreover, many effects of the Occupation took several years longer to fully play out in urban Japan, especially when it comes to the influence of American consumer culture.

Nonetheless, as the limited sample of case studies provided in this paper already shows, both direct and indirect impacts of the American-led Occupation on Tokyo were significant. Preceding the peaceful ground-level invasion was the incineration of large swathes of urban land. The imposition of foreign military rule changed the face of Tokyo profoundly. Military bases and a ‘Little America’ at the spatial heart of the city, just outside the traditional nexus of power — the Imperial Palace — would become important constituents of the bombed-out city. Reconstruction over the following years had parallels with the one following the 1923 Great Kanto Earthquake. Given that Tokyo’s fate was shared by dozens of other Japanese cities, however, resources were now even scarcer and progress even more sluggish. From what can be ascertained from SCAP/GHQ sources, the Allied were at best indifferent to the housing shortage. At worst, their directives prevented the more extensive and faster construction of emergency shelters. The fact that Tokyo could avoid the unchecked growth of slums as well as social turmoil as a result is interesting and warrants further research.

On a more institutional level, some of SCAP’s reforms had strong ramifications for urban space. However, had they been realised as planned and without the Japanese side’s lobbying against some of their key provisions, Tokyo would most likely look different today. More coherent and extensive urban planning and public works could have been made possible had landowners’ rights not been as guarded as in the 1947 Constitution’s Article 29. More autonomous local governments would have perhaps reined more into unchecked urban growth and pollution during the high-speed growth era than a central government which prioritised economic development over citizen’s welfare, at least until the late 1960s. However, the lack of local autonomy may have eventually also played out in Tokyo’s favour. Lax to non-existent zoning rights in the first two postwar decades were arguably behind Tokyo’s significant flexibility and adaptability to grow organically. It can be argued that these were likely the result of an indifferent and institutionally overstretched central government, or in Tokyo’s case the metropolitan authorities. This area, too, warrants further research given its relevance to the urban development discourse.

Some of the most lasting legacies of the Occupation period fed through in a more subtle fashion. The American influence, emanating from within the military bases and the rest and recreation areas, above all Ginza, would help shape the city’s culture in music, dance and fashion. The early postwar years’ “cultures of defeat” (Dower 1999) also included the “pan-pan” girl. She was synonymous with the proliferation of the sex trade fueled by the Allied troops. It can be argued that its results still bear on Japanese urban space, especially around its train stations. American consumption culture infiltrated Tokyo with the Allied Forces’ presence, especially in Ginza, Roppongi and Harajuku. Although they have since been complemented by many other areas of similar if not higher social standing, these areas remain important centres of consumption and popular culture. Lastly, this paper has looked at how the discourse on postwar architecture was influenced by the seminal Occupation-era works of Antonin Raymond and later even Swiss-French master Le Corbusier. The international appeal of Japanese architecture today cannot be seen in isolation from this important time period.

The Occupation period produced a historical moment in time that was without precedent, it was “intense, unpredictable, ambiguous, confusing and electric”. It was markedly different than that of Germany, because “it lacked the focused intensity that came with America’s unilateral control” (Dower 1999: 23). The cities, above all Tokyo, were the arena for these encounters between victors and defeated. All too often, when the Japanese capital is analysed in the social sciences, the focus on it begins with the onset of rapid economic growth in the early 1950s. As this paper has shown, however, much is to be gained from a closer look at the Occupation period from 1945-1952.

Herewith the references, many of them are available online: