I walked past Azuma’s Tower House again yesterday. This amazingly small 50-year-old brick block in Gaien-Mae is perhaps the first in a long tradition of extremely small residential buildings in Tokyo. And while the architecture of scarcity brings about unprecedented creativity, it is also a reminder of what is wrong modern (real estate) capitalism. 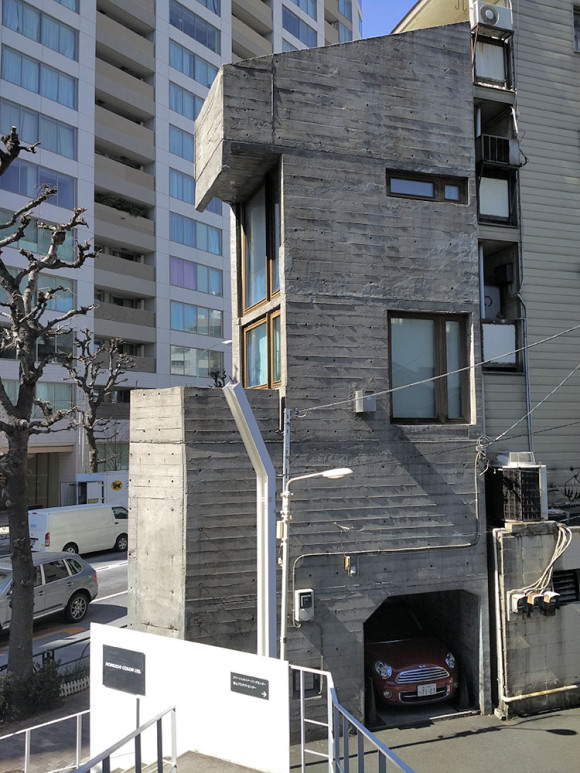 Where is the SAAB?

When young architect Takamitsu Azuma wanted to settle down in the late 1960s, he could have followed the masses to the suburbs. And you wouldn’t have blamed him: Downtown Tokyo was bursting at the seams of its post-war development spree. Pollution was rife, both due to increasing traffic and heavy industry. At the same time, it got more expensive to live in the city centre. The proliferation of apartment blocks began, including those stacking tiny one-room “mansions” into them, for which Japan has become so notorious.

Azuma did not have much space either, but nonetheless decided to stick it out in the city, on a small 20.5 sqm plot in a posh neighbourhood in Tokyo. He went about building his house with dogged determination to make things work with less. The building’s six levels include a rooftop terrace and a carpark. Inside, raw concrete dominates, as some pictures,* including those of my friend Manuel Oka, show.

Azuma’s “Tower House” was somewhat of an antithesis to Kurokawa’s Nakagin Capsule Tower (which was the topic of my second ever post on this blog…). As I wrote previously:

Along with the Nagakin Capsule Tower, the Tower House is among the most iconic and groundbreaking residential buildings of post-war Japan. Both deal with limited space and rapid urbanisation in their very own way. The Metabolist Capsule Tower recognises the growing atomisation of society and provides standardised living space for young single salarymen. Azuma’s Tower House […] offers a warmer vision of society: The possibility of reconciling the vast and growing city with private and intimate family space.

Today, 50 years later, Azuma proves to be a bit of a visionary. Downtown real estate prices have exploded during the bubble frenzy of the 1980s. Japanese inheritance tax laws made the further splitting of small inner-city plots inevitable.

The ever smaller plots are partly behind the rise of a whole new architectural language. The detached kyosho jutaku houses are tiny but make extremely thoughtful use of the limited space allotted to them. Edwin Heathcote of the FT recently called Tokyo’s [kyosho] jutaku “the most remarkable ecosystem of architecturally designed — and architecturally sophisticated — houses anywhere in the world”.

There is no denying the aesthetics and innovation inherent in these buildings. Who wouldn’t want to live in one of these? Just browsing through the “designer apartments” category on any real estate website in Tokyo is a visual indulgence in itself. This (German) documentary, although a few years old already, is also worth watching.

And yet, there is something troubling about these buildings. In one way, they are yet another architectural manifestation of increasing inequality. Theirs, however, is a more subtle message than the one screamed out loud by the towers of the new gilded age, e.g. the “Middle Finger” in New York.

Over the last two decades, Japan has become a much more unequal country. The World Top Income Database, pivotal to the works of Piketty, Saez and others, shows that the top 10% now accrue more than 40% of total income as opposed to just over 30% in the late 1980s, before the onset of the two “lost decades”. This puts Japan ahead of some European countries. Wealth is also very unequally distributed.

In a country where a disproportionate amount of the population considers itself middle class, and where one key reason for rapid post-war growth had been the relatively equal distribution of income, this is indeed troubling. And yet you might ask, what does ingenious architectural achievement responding to Tokyo’s spatial realities have to do with this?

A large role in the increasing inequalities is played by the bifurcated labour market, where short-term workers without the same benefits of regular employees are stuck in insecure and low-wage contracts. The housing reality for many of these people is long commutes and/or small “mansion” apartments, often with less than 20 sqm.

Yes, the microhomes adhere to spatial realities of little space available in Tokyo, but they also reflect its socio-economic realities: who wouldn’t choose a bigger house if there was more money, better jobs, more security. Meanwhile, a more realistic aspiration may be to to live in (or even own) an extremely small building, whose ridiculous size is compensated for by sheer ingenuity of its design. After all this design is celebrated around the world in lifestyle and architectural magazines, and readily supplied by the market and by architects.

It was easier for Azuma, 50 years ago, to convey a social message. He wanted to stick it out, raise a family in downtown Tokyo. Despite the increasing pollution, rapid densification and real estate price appreciation happening around him. The tiny Japanese home today is elevated to coolness and appropriated by a comparatively well-off young urban (and yet not gilded rich) clientele. The increasing inequalities they signify are ignored, because they’re not as extreme as they are elsewhere.

While the 20 sqm mansion apartment is social immobility captured in concrete, the kyosho jutaku is the architectural profession’s illusory and inherently apolitical answer to limited space and stagnant living conditions in Tokyo for an increasing part of the population.

I could end here. But perhaps a few qualifications are needed.

First, I don’t want to suggest that the popularity of the microhouse is directly correlated to rising income inequalities. The economics of the real estate market in Tokyo dictate that smaller plots very often have a smaller per sqm price tag than bigger, consolidated plots which allow to build with a higher floor area ratio.

This, along with other factors such as inheritance law, explains the persistence of the small residential plot in downtown Tokyo. It is actually relatively affordable to build a mini residential house compared to buying units in medium-size apartment blocks.

Two, the Japanese architectural profession has perhaps less tradition of being vocal politically. (For some reflection on “political architecture” and increasing income inequalities, read here.) Even the avant-garde of the post-war era (which included the Metabolists) did not pursue radical social or political ideas.

All of which is not so much of a concern when income inequalities are stable, and there is some form of social mobility via the labour market: Everyone can rightly aspire to live in one of Japan’s cool mini-houses, or even better, a larger house or apartment that does not have to make a virtue of its obvious shortcomings.

Japan’s miracle-era social compact, however, is increasingly obsolete after two lost decades of neoliberal reform and a bifurcated labour market. Scaling back aspirations, symbolically through mini-houses, is therefore just another symptom of our times.

*Notice the aerial shot demonstrating just how different the build-up of the area was at the time!

One thought on “Mini-home social immobility”