From time to time, I receive some comments on the by now more than 200 blog posts on this site. As I have been doing quite a lot of “before and after” photo sets, quite a few people have been able to reconnect with their own past as a result. 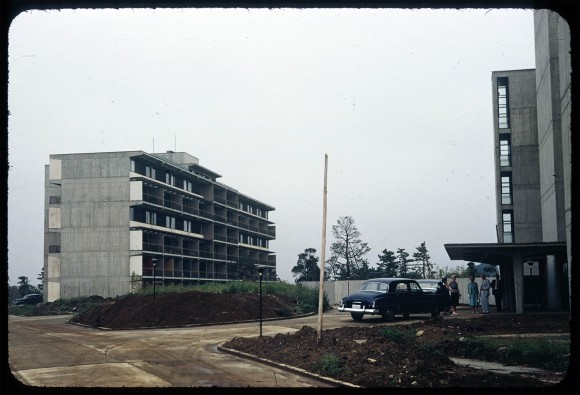 This comment here is from John Hudson, who lived in Tokyo in the 1970s. John replied to my post on the US embassy’s housing.

Wonderful pictures. My wife and I thoroughly enjoyed living in Perry House from 1973-76. I wrote Antonin Raymond to express our pleasure. His delightful reply concluded with an invitation to visit him and his wife in New Hope PA and this: “Since we’re 86 and 87,… you better hurry up.” Sadly, we never made it.

Tuttle published his excellent eponymous autobiography in 1973. As you note, his influence on post-war Japanese architecture was substantial.

The Embassy Admin Section had (and I hope still has) an extensive and wince-inducing collection of 8×10 photos, which documented the buildings. The lobbies, for example, were originally fitted with large and splendid rugs, furnishings, lamps, and drapes – Okura Hotel lobbies in miniature.

I will certainly try and find those photos in the US embassy’s admin section when I’m in Tokyo next.

Thank you for these pictures. We lived in Harris house, 1st and 2nd floor, far right looking from the front from 1958-1963. On a good day we could see Mt Fuji from the roof.

I have stayed at the Okura, first in 1973, and last in 2005 (I think). Superior in every sense of the word. It is truly sad to lose it, but impossible to save, I suppose. The word “progress” should always be followed by an asterisk.

A great comment and link to his own blog came from Andrew Gray to my Tokyo Tower post:

Fascinating blog. I have done similar now & then comparisons from the Hotel Okura, which include a corresponding view of the Tokyo Tower (link). Keep it up!

Andrew has since also posted a great “before and after” post about the Tokyo Prince Hotel, which his grandfather visited in the sixties.