We just got back from a short weekend trip to New York and I wanted to jot down some notes from the things we did and saw in the sweltering heat. With this, I hope to return to blogging a little bit more regularly. 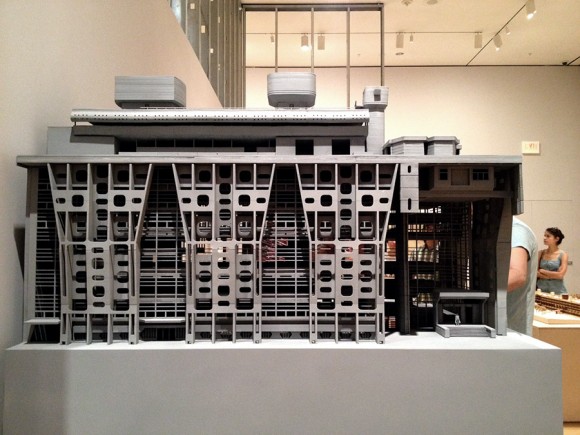 We came to visit family, but took the chance to check in on a few exhibitions, especially Latin America in Construction: Architecture 1955-1980 at the MoMA given it was its last day. As we are working on turning some ideas and buildings from our Yangon guide into an exhibition format, a friend had recommended to look at this large exhibition for some inspiration.

And inspired we were. The show was big, taking up half of the prestigious sixth, top floor of the MoMA. The introduction room set the stage, summarising the developments in the various Latin American countries until 1955, highlighting common themes and idiosyncratic conditions. I have not travelled too much in the region, but connected with some buildings from the Buenos Aires of this period.

The main room’s dominating feature was a timeline above the most interesting section on housing across the continent. As the forces of modernity saw radical a multitude of social visions and political experiments emerge on the continent, so did housing projects take different shapes. Here, and elsewhere, though, it was surprising how apolitical the exhibition was itself.

The models in the exhibition were made both at the University of Miami and in Santiago de Chile and brought to life some of the more monumental buildings. I personally clicked with the Banco de Londres in Buenos Aires (Clorindo Testa) and the Museu de Arte de Sao Paulo, which I liked when I was on visit last year. An incredible wealth of visual material made this a feast for the eyes. Of particular note was the subsection on Brasilia.

We also took a look at Yoko Ono’s one-woman show next door. She is a wonderful artist, and to show her early work from the 1960s is remarkable given the famous (non-) show she had at MoMA during the time itself and the rich body of work she has created since. 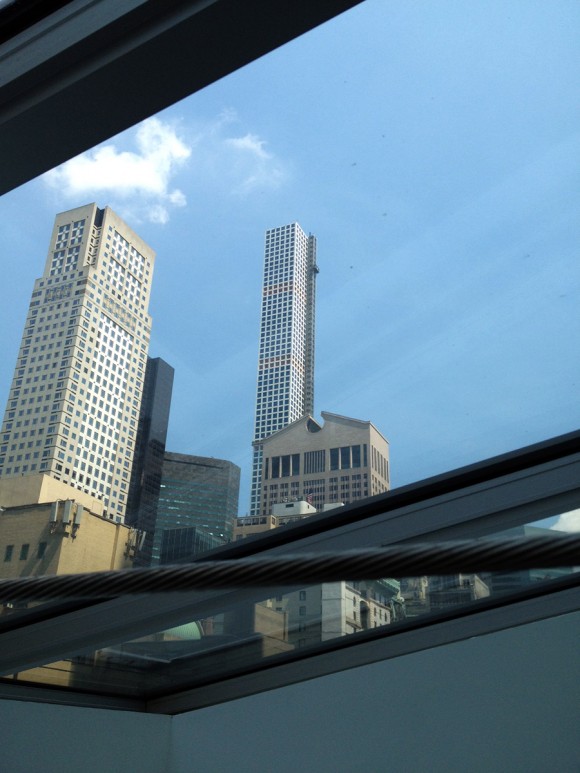 Her piece, created for the exhibition, “To See the Sky” allows you to climb up a round staircase, arriving at a platform from where to appreciate the Manhattan skyline surrounding the MoMA. The new kid on the blog, with its overbearing presence, is the “Middle Finger”.

Next up were the Studio Museum in Harlem. I visited quite frequently when we lived nearby last year, so it was good to check in and see the place before large-scale expansion work is set to transform the museum yet again.

The real eye opener of the weekend perhaps was the PS.1 in Queens, which we had never been to before. Here, we were led through the exhibits by a staffer, who gave us his excellent views on them.

Simon Denny was a real discovery, his “Innovator’s Dilemma” was incredibly intelligent and accessible. I have not seen anyone deal with the themes of our digital world so artfully before. Whatever your take on the start-up world, Kim Dot Com or Ted talks, Denny’s is a contemplative perspective.

Everything else on show in the museum was great, and, for my record, included: Jos de Gruyter and Harald Thys: Fine Art,  Wael Shawky: Cabaret Crusades (a brilliant three-part puppet play) and Samara Golden: The Flat Side of the Knife. All in all, really worth the trip to Queens.

We also splurged and went for lunch in the Four Seasons in the Seagram Building, Mies’s sole contribution to the New York skyline. Amid concerns that the iconic Manhattan eatery may have to vacate the premises, I thought now is the time to go and have a moderately-priced bar lunch. It was very worth it. The aura of the place is magical.