Since I first blogged about the rise of the super slender skyscrapers in New York, 432 Park Avenue has been growing into the sky. The inequality argument has picked up, and some have likened the building to one giant middle finger the super rich are showing to New Yorkers. 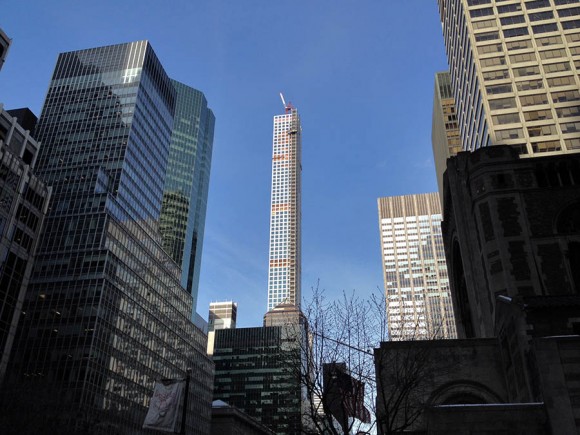 Freedom Tower on the site of the former World Trade Center (which I have also written about on this blog here) is only nominally taller due to its antenna. Which is why the highest floor on 432 Park has got the highest built elevation anywhere in the city.

Amazingly, you can still buy your place almost at the top, on the 94th floor, if you happen to have USD 82.5 million in spare change lying around. The monthly maintenance cost and taxes run up to USD 30,000. This plan shows that the apartment covers the entire floor. It costs roughly USD 10,000 per square foot, somewhat lower than the most expensive apartment in the US, on the West Side of Central Park, but not by much.

There has been so much coverage on the inequality angle that I don’t need to go into the argument again. There is a great piece on Fortune that sums it up quite nicely. One wonders how many of these buildings it will take before a new wealth tax or luxury real estate tax are introduced.

What I find striking is how visually scarring the impact of this building really is now that its dimensions are fully appreciable. The tower can be seen from all five boroughs. Its sole feature appears to be giving its wealthy residents 360 degree views.