Cross-posted from the GFI blog: I am back from a month traveling in India, visiting Delhi, Chandigarh, Mumbai, Bangalore and Chennai. It was an opportune moment to assess the first 100 days of the new BJP government under prime minister Modi. 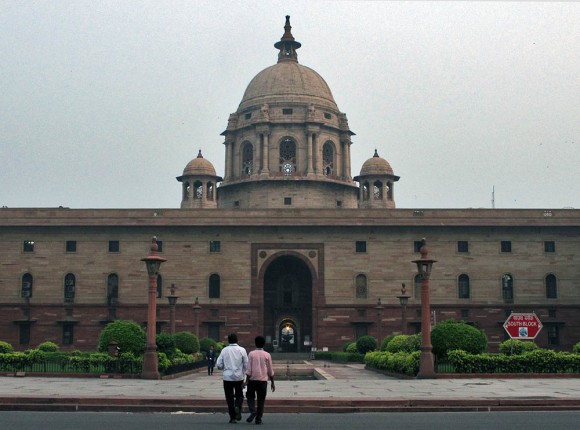 The Secretariat’s South Block in Delhi

With an unexpectedly clear election victory giving him the strongest mandate in a generation, hopes were running high for an immediate turnaround in the economy, after an increasingly sclerotic Congress-led government seemingly had much of India in paralysis.

Yet as my colleague Sam Baker had already argued after his May visit, the biggest advantage and most immediate benefit of Modi’s victory would be a short-term boost to sentiment. Lacking an Upper House majority as well as facing the challenge of governing a country of the size and complexity of India, neither “quick wins” nor major reform initiatives would be very realistic in the immediate aftermath of the poll.

Events largely followed this script: Corporate India has seen a major sentiment boost, evidenced in higher stock market valuations as well as a flurry of M&A and private equity deals. The defense and railway sectors have been at least partially opened to FDI. More important, perhaps, has been the announcement that after decades of crafting five-year plans, the Planning Commission would be disbanded. Citing mainly these examples, business leaders I spoke with in Delhi remained cautiously optimistic.

Modi’s critics on the left have been a little caught off-guard by Modi’s aggressive pro-poor policies, amongst them a push for better sanitation, broader access to financial services as well as a raft of environmental measures. The PM’s own poor background makes him more credible in this respect. His 15 August Independence Day Speech was a case in point. Non-scripted and without the customary bullet-proof shield, he addressed thousands within Delhi’s Red Fort, presenting himself as a man of the people.

To the fans of his “Gujarat model”, the announcement of high-speed railway investments has been greeted with enthusiasm, albeit not much detail has been unveiled. I met with government employees who cautioned not to expect much very soon. If Modi wins a second term, he will most likely be able to inaugurate one of such lines, most probably the one connecting Ahmedabad with Pune and Mumbai.

However, one of the biggest problems afflicting India until then remains the gridlock within her metropolises: of my four weeks in the country, I easily spent more than 24 hours caught in traffic jams, especially in Delhi, Mumbai and Bangalore. Yes, investments are underway and likely to accelerate under Modi’s reign. In all cities I visited (bar Chandigarh), new Metro lines are opened and/or are under construction, often thanks to Japanese development aid. New flyovers and highways relieve congested roads.

However, one has to wonder whether these investments are coming online too late given where India stands in her development. My host in Bangalore, working for an IT consultancy, spends on average 3-4 hours per day in his car, commuting to his office a mere 20 kilometers away. On a rainy and thus particularly gruesome day, his way home took him three hours. At the same time, pollution is becoming a major, yet largely unrecognized problem.

While India and the world are still getting used to Modi’s vision of India and her future, what is becoming clear already is that he will not follow a clearly-scripted doctrine of more liberalization, deregulation and less government. His administration’s repudiation of a WTO deal streamlining customs rules across the world as well as the cancellation of a trip to an ASEAN service trade agreement signing are showing a trade-sceptic side of Modi that was relatively little known before.

However, as an admirer of the Japanese economic miracle, such moves do make for a coherent policy: Modi sees himself at the helm of a strong developmental state and free trade will only be allowed when it benefits his political and economic ambitions. Another very real reason for continued protectionism in some key sectors, however, lies in Modi being beholden to politically powerful special interest groups, such as farmers, small shop-owners and some trade unions. In this reading, the long-awaited opening of the retail sector, among other liberal policies, may still be years down the line.

Perhaps most worrying in Modi’s tenure to date have been the increasingly aggressive Hindu nationalist overtures and the frequent appearance of Hindutva in public discourse, i.e. the notion that all Indians are essentially Hindus regardless of whether they are members of Islam or other faiths. Among those to watch are Hindu nationalist and Modi ally Amit Shah (now BJP supremo) as well as RSS leader Mohan Bhagwat. One prediction that was voiced frequently to me was that should Modi’s economic plan run into trouble, an even more overt Hindu nationalism may win the day at the cost of surging inter-communal strife.