Chandigarh’s Capitol Complex is the administrative heart of the Indian states of Punjab and Haryana. Le Corbusier designed the main buildings of Sector 1 himself. We took a tour a few weeks ago. 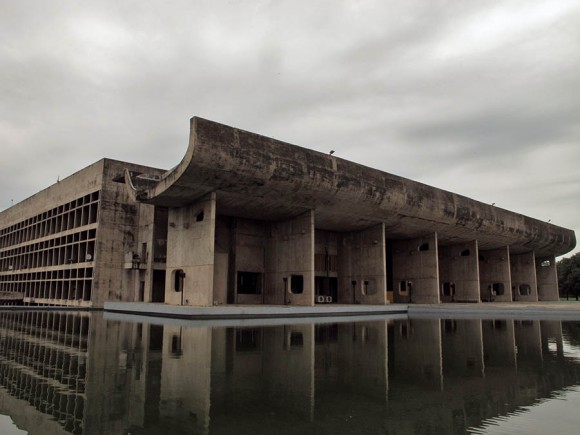 The Assembly seen from the water ponds on the eastern side

Chandigarh is only a three-hour ride away from Delhi if the visitor arrives by the express Shatabdi train. The city’s unique layout and the way that life has adapted to its planned character definitely justifies a visit. We spent just one night here, but thanks to Narinder Singh “International”, we managed to see the main sights just in time for us to catch our flight to Mumbai. 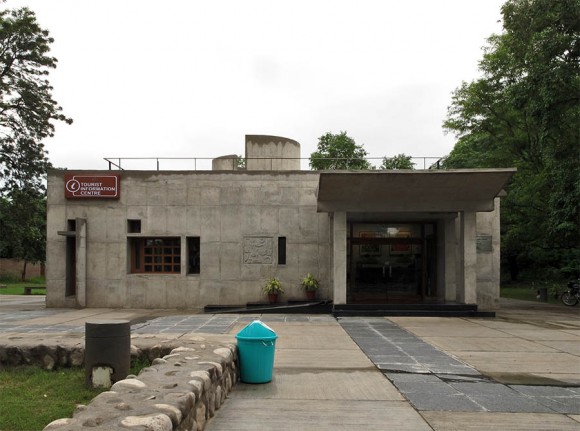 Visitors should plan in at least three hours for the Capitol Complex. Before entering, one needs to obtain a visitor pass from the Tourist Information Centre located at the entrance (pictured above). From here, one needs a little patience for the paperwork to be processed and checked again and again by the checkpoint and entrance guards.

The pass you are issued with lets you enter the Secretariat Building. Here, the first stop is on the sixth floor, where the photography permit will be issued (it is a little Kafkaesque, yes). Then it is time to climb the roof and enjoy the amazing 360-degree vistas, e.g. towards the High Court: 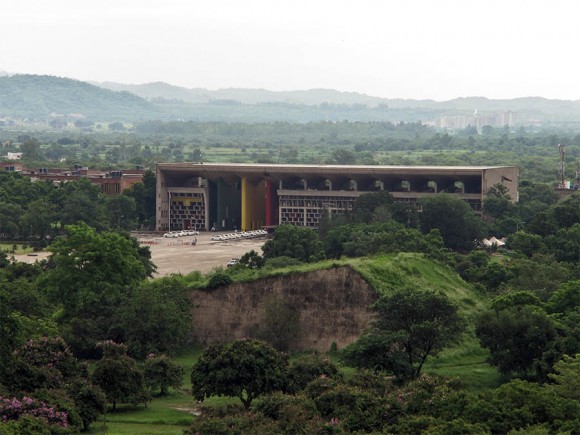 …or the Assembly Building: 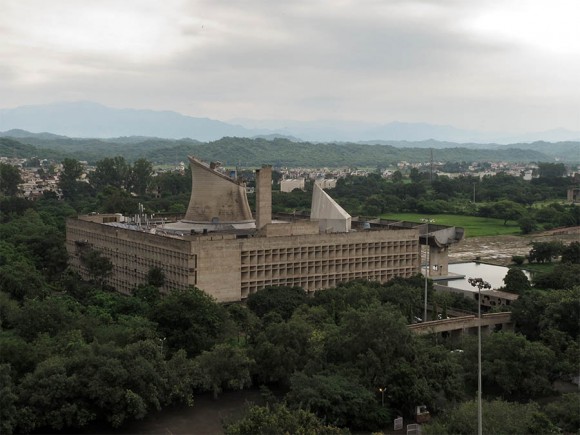 Finished in 1962, the Assembly building houses both Punjab’s and Haryana’s legislative chambers. The inside of building is striking. The huge space ‘forum’ surrounding the chambers provide circulation as well as space for informal meetings around the sessions. 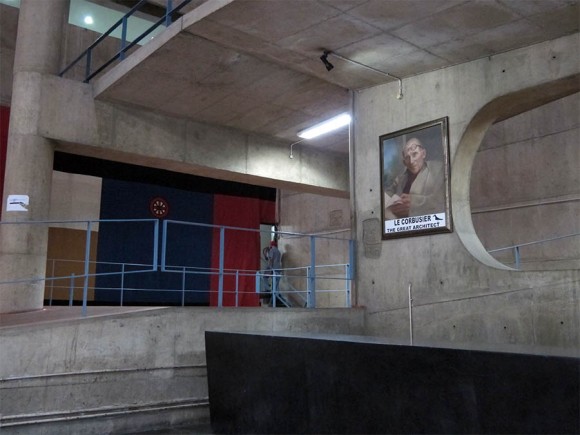 The only snap I took (before being kindly told that photography is not permitted inside the Assembly) is of a Le Corbusier painting hanging inside the forum. The Punjab legislative chamber is decorated in a colourful, organic, almost playful fashion. 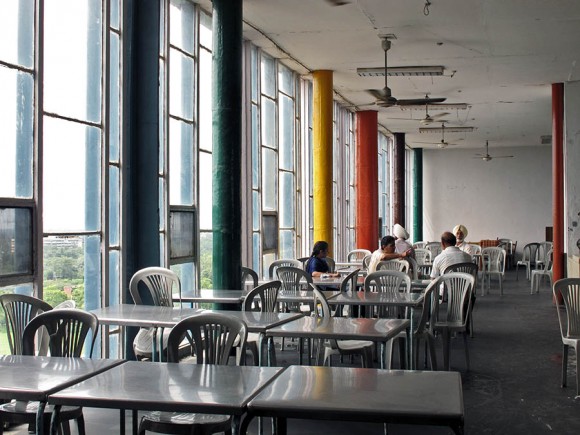 Back at the Secretariat, done with our roof tour, we find the building’s cafeteria. It affords equally splendid views of the vicinity and lets employees enjoy their freshly cooked Indian canteen food. 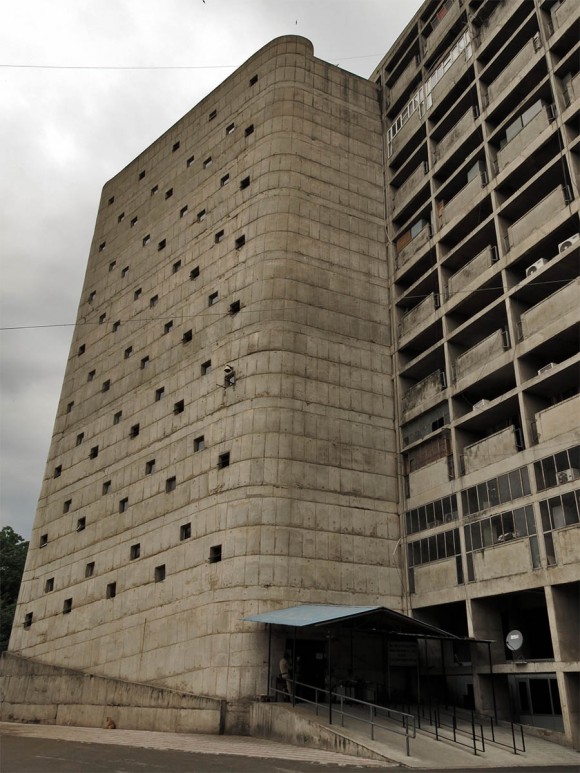 On our way out we exit through one of the two sculptural ramps. They were added to the otherwise rather drab building to break the facade’s monotony as well as to increase ventilation. 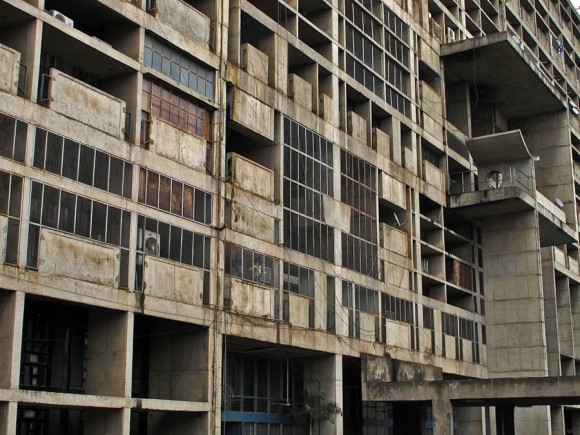 The facade is not too well maintained. Many offices have had air conditioning units retrofitted, further eroding Le Corbusier’s original design intentions. Nonetheless, I had somehow expected it to look worse given the Secretariat’s age and general problems of maintaining concrete structures in Indian climatic conditions.

On the inside, some floors were renovated (not in line with the original design), while others were in their original state. Fabled Chandigarh furniture was visible in many places. Some of the discarded tables, desks and chairs still littered the space in the upper ramps. 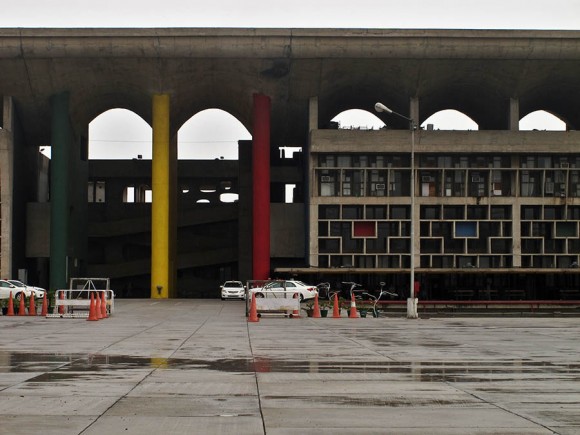 The High Court seen from the West

The High Court is an L-shaped building facing with the long facade facing the Capital plaza. The smaller courtrooms are separated from the Chief Justice’s Court by a large pillared entrance. The pillars and dividing walls are colourfully painted. The design of the Court is climate-responsive, i.e. protecting from the harsh sunlight as well as torrential rains during the monsoon season. This is achieved by double-roofing to enable air currents to flow.

We visited on a busy day. On our way out of the complex, Narinder flagged down the first car appearing on our right, hitching a ride for us to the main road. The car belonged to the state’s Advocate General, who kindly answered a few of our questions on the short ride. He spoke of his high admiration for Le Corbusier’s plans and how well the city continues to function to this day. 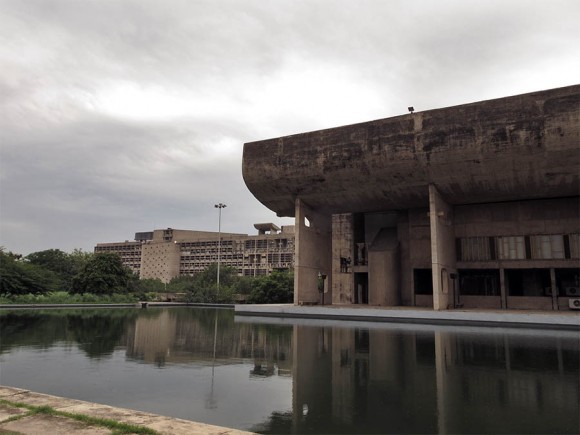 …the Capitol will be a splendid park, with mountains, trees, flowers and architecture. It is dedicated to the pedestrian: man his own master, on foot, walking and living without fear.

Does Chandigarh’s Capitol complex work, and did Le Corbusier achieve his vision above? Yes and no. The space is amazing, and the buildings are more or less functioning as intended. However, due to restrictions of movement between the buildings (especially the Assembly and the High Court), there is no natural flow of pedestrians. Distances are too far, and given the general public’s inclination to use the car / scooter to substitute even the shortest walk, hardly anyone is seen to be on foot. 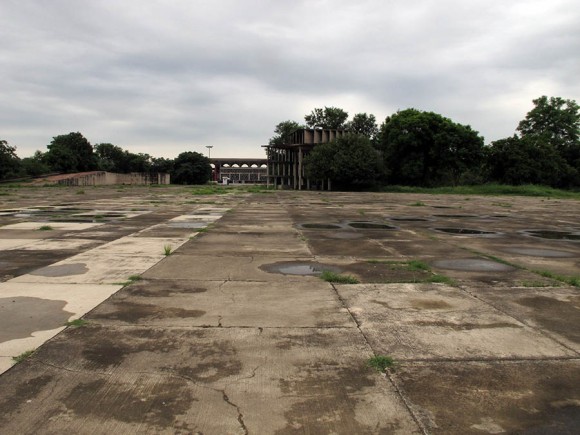 What is more, plastering huge areas of the ground with huge concrete tiles does not work in Chandigarh either. This in-between place was also never finished, and is maintained poorly. The Capitol, just like Chandigarh as whole, has its visible flaws.