As I write this, we are already back at the airport, waiting to board our plane to Europe. What follows is a brief summary of what I was up to in New York over the past nine months, helping me explain to myself where the time has gone! 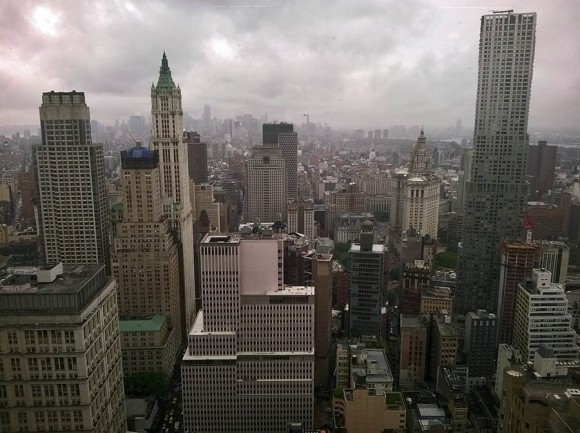 I was lucky enough to wave good-bye at the Big Apple from one of the iconic modernist office buildings in downtown Manhattan. Despite the overcast sky, the view towards the North was terrific as usual (Frank Gehry on the right, the Woolworth Building on the left).

Looking back, my inroad into New York was not just the city’s great architecture but perhaps more so the intellectual journey it allowed me to embark upon. The proximity to Columbia University, where my wife studied for her Masters and where countless public lectures kept me climbing Morningside Heights, helped tremendously. Engaging with Thomas Piketty’s Capital in the 21st Century was one major facet of that intellectual journey.

I tried to keep up jotting down my walking observations, yet I wasn’t as ardent in doing so as I was in Tokyo. Nonetheless, several posts about our home in Harlem as well as some commentary about the super rich rising to the sky did make it on the blog. Writing these posts down helped me focus my own thoughts, and guide our guests through the streets more knowledgeably.

More recently I went to the New York World’s Fair ground in Flushing Meadows, Queens. Come to think of it, I seem have a soft spot for the history of world exhibitions, perhaps there’s a theme to explore for the future. After all, the 2017 edition of the World Expo is slated to take place in Astana, a city I would like to revisit.

With less posting occurring on this blog, my excuse is that at least the time wasn’t spent altogether unproductively. Much of it went into new projects that kicked off while I was here. In (re-)connecting with the digital world, I started two Tumblr photoblogs, one of post-war Japan, the other on Yangon’s architecture. They are both related to the two book projects I am working on at the moment.

A big chunk of my time, although hardly documented on this blog, was to set up my own company together with my colleague Sam Baker. At Global Frontiers, we organize institutional investor trips to emerging markets. Since September last year, we put together almost ten of them, I myself took clients to Mexico in May.

My wife and I will spend the summer in Europe mainly, and perhaps visit family in India in August. In September, we will return to the United States. Then, we will exchange the urban jungle that is New York with the capital charm of Washington, D.C.

I look forward to another chapter in our American adventure!