Courtesy of my friend Chris, I found this old blog post of mine dating back to 2005. In it I discuss Eurasianism, an ill-defined school of thought in post-Soviet Russian social science. Amid events in the Ukraine it feels strangely up-to-date today. I repost in full after the jump. 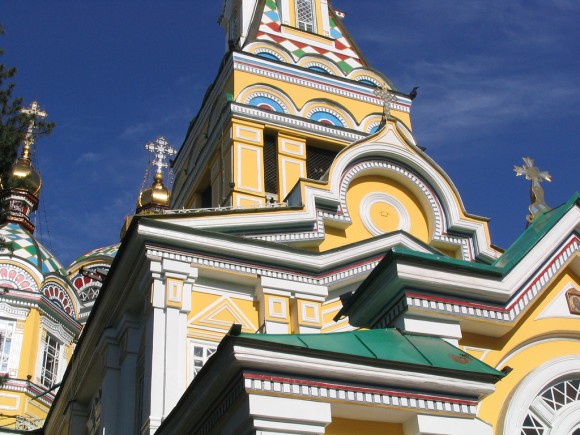 Posted on my former personal blog on 9 October 2005

When I was in Tblisi in September, a friend of mine from Moscow, Misha, first explained to me what Eurasianism actually means, and that Dr. Dugin is by no means the only authority on the subject.

Misha, who did his PhD in history at Moscow State University, said that everyone in Russia only having a remote interest in history knows about this theoretical concept. It is very popular right now, however, the main proponents are often dubious characters that are sometimes difficult to separate from far-right ideologues and national bolsheviks.

He basically reiterated similar points stated in this, quite outdated, Eurasianet article:‘RUSSIA’S FOREIGN POLICY AND EURASIANISM’ by Dmitry Shlapentokh. Misha, however, thought that Eurasianism is not as a strong force in Russian foreign policy as many others claim.

What I take to be the most important points in Shlapentokh’s article:

The ‘clash of civilisations’ theme is hence not inherent in the very core body of the theory. It is only added by modern-day Eurasianists like Dr. Dugin.

It becomes thus interesting to see in how far the Russian government, most importantly, President Putin embraces the concept or not. Here, we can track a changing attitude over the past couple of years.

In 2000, Putin just got to power, the President contributed an article to Euraziistvo: Teoriia, Praktika (Eurasianism: Theory and Practice), where he proclaimed that Russia should turn its policy focus to the Asia-Pacific region.

Obviously, 9/11 changed all this again, with Putin closely-allying himself with the US-led War on Terror. Dubbed as appeasement by some (including endlessly-ridiculous John Laughland), Russian foreign policy indeed turned westwards.

However, as we know, the year 2005 marks a decisive shift, and events in Uzbekistan and a dramatically-changing rhetorics in Moscow leave people puzzled whether Eurasianism is again in an upswing or not.

Some people take Putin’s speech in Kazan as a hint, where he praised Lev Gumilev, the founder of modern Eurasianism.

To me it seems quite clear that modern Russia borrows some elements of Eurasianism to formulate her foreign policy. This does not mean, however, that people like Dr. Dugin become top-rank policy advisors.

There are sentences like these that in my opinion dismantle Dugin as being a man totally detached from reality – someone who flees into a black-and-white world that looks strikingly similar to a board of chess:

It is also known that at the very beginning, Dugin had considered Turkey as a foe, and only in the last period he changed his mind and thought that actually Turkey would be charged with a key role in the alliance, which will be set up against the United States.

The article from which I took the quote is interesting inasmuch it sheds light at a possible alliance between Turkey and Russia, the two gateways between East and West, by definition formidably set up to work together against the US, at least that’s what Dr. Dugin thinks. While there are signs that both countries are working more closely together, it is quite devious to speak of the two nations as strategic partners, also given their century-long rivalry and military confrontation.

This chessboard thought made me look up this quote:

Turkestan, Afghanistan, Transcaspia, Persia – to many these names breathe only a sense of utter remoteness or a memory of strange vicissitudes and of moribund romance. To me, I confess, they are the pieces on a chessboard upon which is being played out a game for the dominion of the world.

To me, Dugin sounds a little like the man from I took this quote, dating back to 1892 and from Lord Curzon’s book Persia and the Persian Question.

In terms of the theory’s contemporary value, some of Dmitry Shlapentokh’s words are worth quoting at length:

It would seem that Eurasianism’s flaws, rooted in its selective analysis of Russia’s past, would preclude its serving as a viable blueprint for Russia’s future development. It might be able to address some of contemporary issues, but ultimately seems destined to run into trouble, due to the seriousness and complexity of the region’s ethnic, religious and geopolitical problems.

Whether Russia is alienating herself from the EU and the US in favour of her historical sphere of influence is also highly doubtful. Despite recent misunderstandings, the trends are fairly clear: At least the European Union is – also beyond oil – increasinglyintegrating with Russia in the economic hemisphere, and the Russian political class is absolutely aware of this, despite problems in defining the European entitity.

Alexander Rahr, leading German Russia expert (who himself has made fairlycontroversial comments), has given an interview to the German ‘Eurasisches Magazin’. Despite his recent gaffe in relation to Kyrgyzstan’s regime change in March, he makes a good comment on the influence Eurasianism has and will have in Russia’s foreign policy.

Rahr holds that Russia will not be able to become a single and separate geo-political force as the Chinese influence will grow much more considerably over the coming years, putting pressure on Russia from the East. Hence, the only tangible option for Moscow is to intensify ties with Europe.

When Putin described the demise of the Soviet Union as the “biggest catastrophe of the 20th century”, he reflects the Russian historical understanding – which holds that the Soviet Union unified the core parts of a thousand-year-old Russian empire. The origin of this is located in today’s Ukraine, the Rus in Kiev. Belorus inseparably belonged to this entity as well, as – in the opinion of many Russians – did the Caucasus, Siberia and Tatarstan (the latter two still being part of Russia).

And, according to Mr. Rahr, there is still the hope that Russia will be able to regain these lost parts again, maybe in a hundred years. While this idea is still present in the thoughts of many Russian politicians (and is having a slight rennaissance judging from the popularity of Dr. Dugin), this does not mean it will translate into armed conflict. Russia is not capable of doing this, and the quite derailed ideas of Dr. Dugin (e.g. the alliance with Turkey) won’t be the way forward, as most people in the Kremlin understand quite well.