A few articles have got me thinking over the past couple of weeks. Ideologically, they have made this year kick off on a slightly “disorienting” foundation. Of particular note have been a long piece on ecology as well as a series on architecture. Yet also polemics on work ethic and class have been pondered long after putting them aside. Herewith a few scribbles. 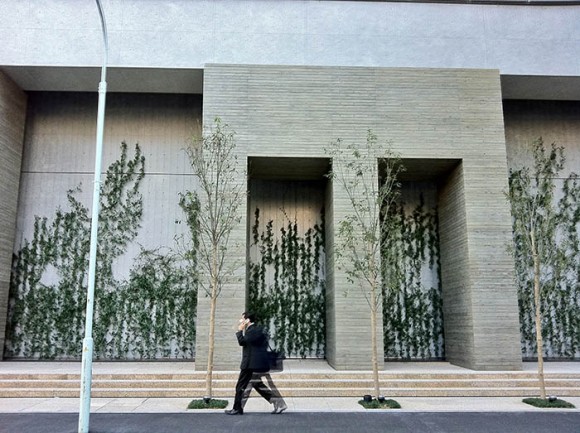 Man walking in front of Shimizu HQ, the most eco-friendly office in Japan, so they say…

When I say disorienting I probably mean that the articles have been much more on the radical end of what I normally find myself supporting. It is perhaps not surprising given that topics like income inequality and social mobility are much more in your face here in the States.

Anyway, the first article was a long treatise on the failure of the green economy by Richard Smith, published on Truth Out. It is worth going through in its entirety, although Smith’s argument is fairly straightforward: as long as you cannot dematerialise growth, all green initiatives are doomed to fiddle at the margins.

What is worse, they make us believe that growth and ecological preservation are not mutually exclusive when the bitter truth for the foreseeable future may be just that.

The only way to prevent climate change may thus be to reduce per capita output (and rein in population growth?). However, market-based mechanisms are not going to help achieve that as long as the principal responsibility of the firm is to its shareholders. The answer must thus be at least a partial suspension of the market in favour of a planned economy.

And all those who say that you should tax the nasty externalities (pollution et al) need to answer just what will be done with the windfalls. As long as they are recycled back into the system, there will be no meaningful reduction in CO2 emissions – after all, consumers use income tax breaks to fly to the Caribbean.

I am no ecologist and haven’t done my reading on all sides of this debate. Nonetheless, I think there is a lot to chew on philosophically in this article. For one, the mantra of doing good while adhering to market principles must be challenged from an ecological point of view as long economic growth remains our primary concern.

Another related point regards the consumer. With the “green economy” accelerating, s/he is made to believe that consumption and ecological preservation are not mutually exclusive – in fact perhaps positively correlated, as long as we all consume ethically. Alas, even if all of us bought organic food, drove Hybrid cars and offset our carbon emissions, hardly anything would change.