As my business partner and I are beginning to plan a trip to India around election time (April/May) I tuned into a recent Asia Society event with great interest. It was all the more interesting as my wife and I explore opportunities of going to India for a longer period of time once we’re done over here in the US. 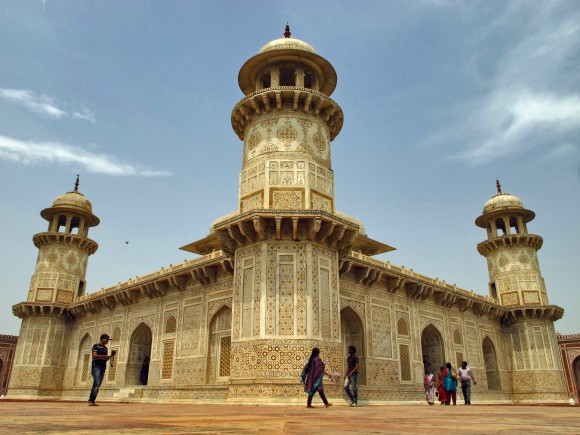 The Mausoleum of Itmad-ud-Daulah, Agra, India

I thought most contributions were thoughtful and the level of the debate high. For someone like me who hasn’t followed Indian politics closely since the last general elections in 2009, it was a welcome refresher with a balanced panel.

As markets seem to price in a victory for the opposition BJP and its PM candidate Modi, the discussion quickly turned to assessing his reform credentials. Modi has famously been “ruling” Gujarat for the last 13 years.

Modi’s big stain is of course his role in the 2002 Hindu-Muslim violence in Ahmedabad. His economic track record, however, appears enviable. The indicators are telling a success story for Hindu and Muslims alike, e.g. HDI figures rising faster than the national average.

But Modi’s governance track record is not without “detractors”, either. In Gujarat, he could rule largely unchecked. At the national level, he will have to make friends and build bridges to (likely) coalition partners, a role he does not seem overly familiar with.

At the same time, it will be hard for Modi to keep reactionary elements of his party in check. The BJP is no pro-reform party. It has famously spoken out against many liberalisation initiatives while in opposition against Congress, not necessarily a pro-reform party either.

Paradoxically perhaps, the reach of the Indian state remains chronically limited: by way of illustration India has by far the lowest amount of policemen per capita. Parallel structures have proliferated, e.g. in private security. Building up the state will be one of the key themes of the next 10-20 years.

Modi’s open adoration for the developmental states of East Asia is probably more to do with his love for infrastructure projects such as the shinkansen as opposed to his ideas about the role of the state. For the East Asian miracle states were all capable and strong states during their periods of rapid economic growth.

Modern India, for now, seems far away from that.